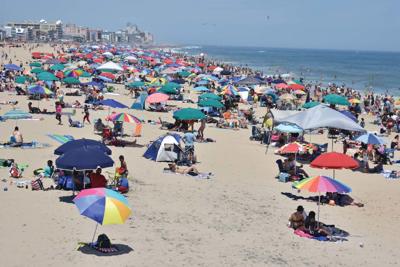 (May 31, 2019) It once seemed that Ocean City might never again see a completely sunny weekend, much less a four-day run of nearly perfect weather to open the season.

But that’s what the Memorial Day holiday did for Ocean City last week and bringing with it sold-out hotels, packed businesses and some record-breaking numbers.

“It was the best Memorial Day we’ve ever had,” said Seacrets owner Leighton Moore. “We enjoyed four days of straight sunshine. Usually, we have to deal with two or three days of rain, but this year was amazing.”

Following tradition, Seacrets on 49th Street opened its doors at 8:30 a.m. on Saturday, but that didn’t stop people from lining up well beforehand. Maybe a little too early.

The lines were long well into Sunday, something that almost never happens, Moore said.

“It was a great Memorial Day weekend that was enjoyed throughout the town,” he said.

The Boardwalk restaurant and tiki bar both enjoyed four days of sunshine and crowds of people dining, as well as record-breaking sales for the weekend, but Brink was most impressed by his crew. One chef in particular merited special attention.

“There was a minor hiccup over the weekend … our chef broke his hand in the middle of the weekend and put out amazing food all day long even though he had just one hand,” Brink said. “It was amazingly impressive. He was the most professional person I’ve ever seen in my life.”

Overall, however, he said it was a spectacular weekend for Ocean 13 and other Boardwalk business owners.

“It was really great to see the town do well,” Brink said. “A lot of my restaurant friends – owners and employees alike – all seemed really happy with the weekend.”

Weather really was a factor for success, especially for bayside establishments like Fish Tales on 21st Street.

“It’s all about the weather,” owner Shawn Harman said. “Last year, it rained on Sunday ... so the weather dictates everything.”

In fact, the weather was so nice, some establishments ran out of supplies earlier than expected, which, according to Harman, is a good thing.

“Friday was busier in town than anyone expected,” Harman said. “All the people in my business that I’ve spoken with had a banner weekend. A lot of people had to scramble because they ran out of stuff, even though they were prepared.”

It was an equally great weekend for hotels and motels this year, with several in the resort selling out, Ocean City Hotel-Motel-Restaurant Association Executive Director Susan Jones said.

“We were blessed with a stellar forecast, and Memorial Day weekend is historically reliant on weather,” Jones said. “Saturday and Sunday many folks were sold out and did quite well, and while I haven’t directly spoken with any restaurant members as of yet, I’m guessing they did pretty good too.”

“We had a great Memorial Day Weekend,” Smith said. “Sales were up for all three stores from the year before.”

One store in particular received glowing reviews and that was Smith’s latest addition: OC Socks.

“OC Socks got a lot of great feedback and all the customers seemed to love it,” Smith said. “It’s not the busiest Memorial Day we’ve had but it was definitely busier than last Memorial Day. Treasure Island, OC Socks and the dog store did very well.”

The Ocean City Chamber of Commerce was especially happy with the turnout for last weekend, welcoming in the first week of summer.

“We would say it was an incredibly strong Memorial Day weekend [and] a great kickoff to the season,” Executive Director Melanie Pursel said. “The weather was absolutely wonderful and it seemed like businesses were bustling and there were people on the beach and the Boardwalk.”

She also credited some of the new establishments and activities that have joined the resort lately, like several new restaurants and businesses, and incoming events like the WreckTangle, Jellyfish Festival and other summer interests.