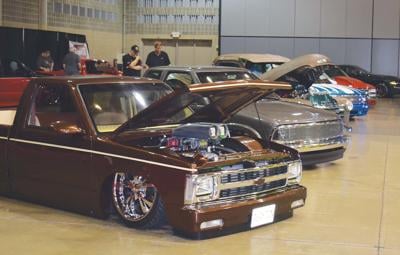 (April 24, 2020) It’s adieu for the Ocean City Car and Truck show, after the coronavirus killed its chances of coming to the resort in 2020 and beyond.

The virus will most likely also affect this year’s Jellyfish Festival schedule as well.

“The decision was really difficult to cancel the OC Car and Truck show — it’s my longest running automotive event, and it would’ve been in its 20th anniversary year,” said Brad Hoffman, event founder and Live Wire Media owner.

The annual car show, typically held at the Ocean City convention center at 40th Street, is a car builder and a car culture enthusiast’s fever dream, as it features an array of hot rods, muscle cars, tuners, trucks and exotics.

It is also an opportunity for car enthusiasts to win prizes and get special deals on items such as speakers and sound systems.

Furthermore, although the event targets car enthusiasts, it also caters to families and offers activities such as vehicle silhouette coloring, giveaways and photo opportunities.

Nonetheless, as the virus spread and state and local mandates shut down businesses, restricted travel and limited social gatherings, Hoffman said hosting the event in early June would no longer be feasible.

“With everything going on with covid-19, early summer is not going to be a time where you’re going to pull a lot of people together for an event. Not that I don’t think it could happen, I just think it wouldn’t have happened like we would have wanted,” Hoffman said.

More importantly, Hoffman said he wanted to err on the side of caution, and protect the health of participants, spectators, his staff and staff at the Ocean City convention center.

“It was just the right decision,” he said.

Hoffman said he did not believe the show would return in 2021.

“The show has kind of run its course, and I feel like this would’ve been a great year to go out on its 20th anniversary, but it’s just not going to come together that way,” he said. “[It’s] tough when you run something for 20 years — it’s like your baby.”

Hoffman said all vendors and participants would receive a refund or they could transfer their registration to other Live Wire-sponsored events, such as the Virginia Hot Rod and Custom Car show in the Hampton Roads Convention Center.

Additionally, the Jellyfish Festival — Hoffman’s music and sporting event slated for June 27-28 — will most likely be rescheduled to sometime later this summer or in the fall, he said.

Hoffman said he wanted to thank everyone who has supported the event the past two decades, and especially his wife, Mary Pat, and his daughter, Molly.

While the pandemic has taken several event and marketing victims this summer, Hoffman remained positive and looked forward to future events and the resort’s eventual reopening.

Generally sunny despite a few afternoon clouds. Much cooler. High around 65F. Winds WNW at 10 to 20 mph.