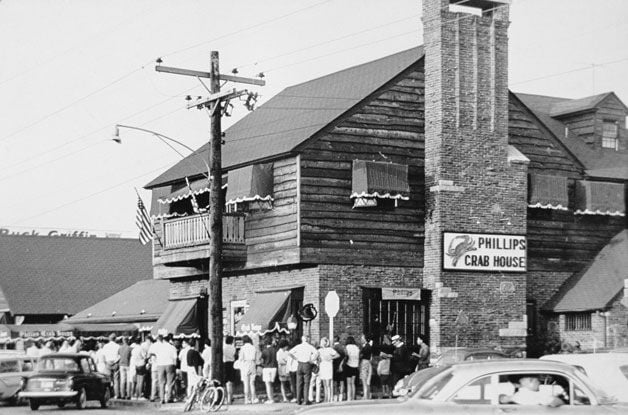 Lines formed outside of a Phillips Crab House on 21st Street in the late 1950s. 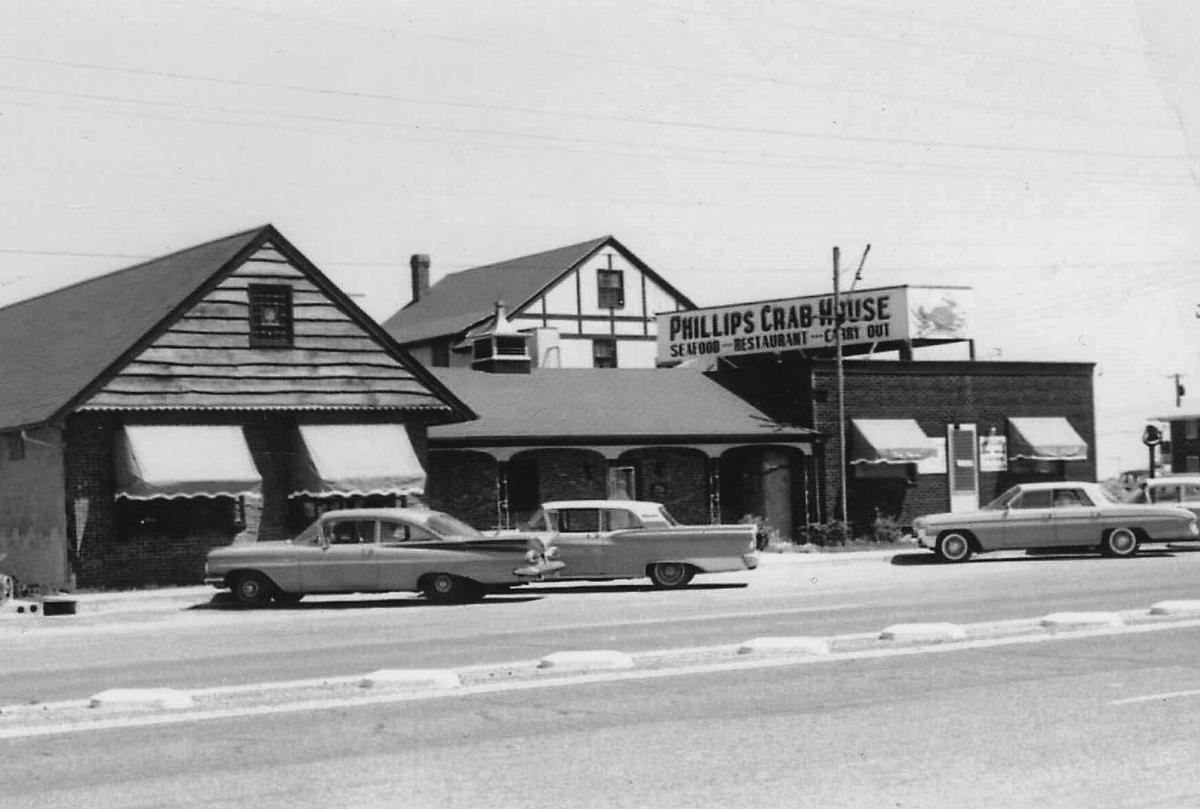 Phillips Crab House in the early 1960s, before an array of expansions. 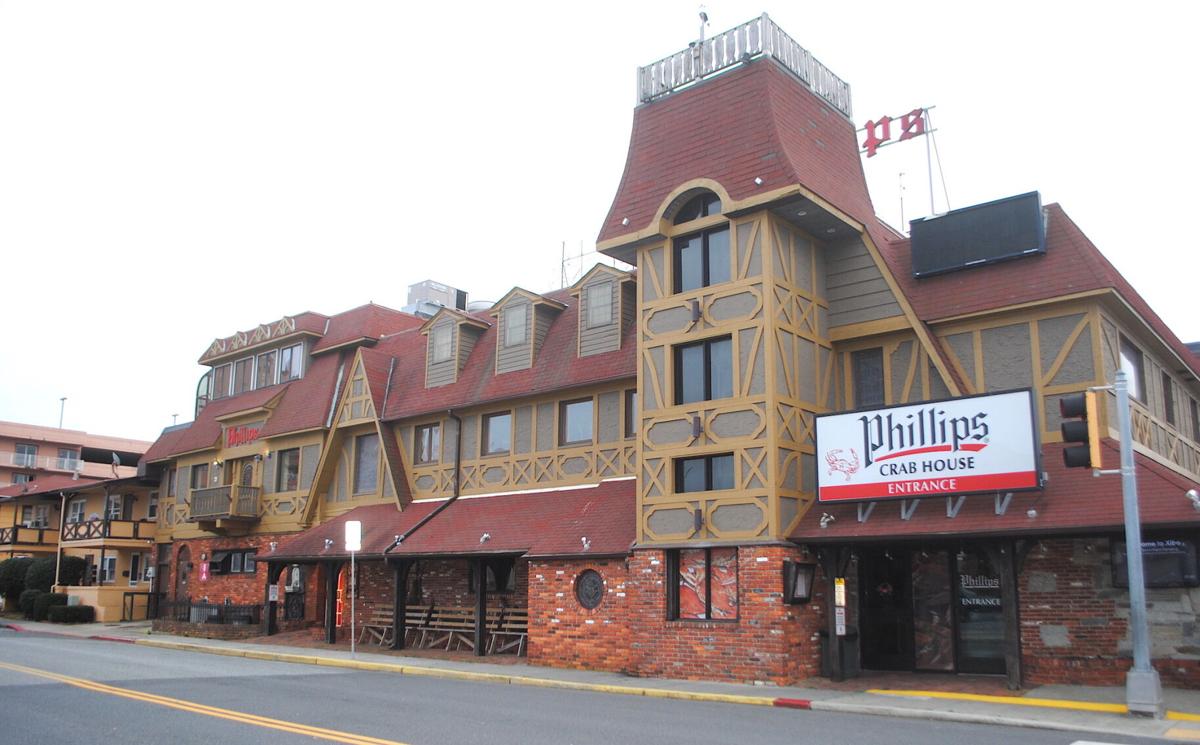 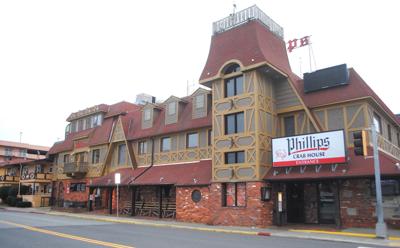 Lines formed outside of a Phillips Crab House on 21st Street in the late 1950s.

As the sun set earlier this week on the shortest day of the year, a woman walked deliberately around the side of the shuttered Phillips Crab House property on 21st Street, shooting photos with a small digital camera.

She looked up at one point, a touch of melancholy in her eyes, and simply said, “Isn’t it sad?”

The woman was undoubtedly one of the thousands, possibly millions, who heard the big news that broke a day earlier: Phillips’ flagship Crab House in Ocean City had been listed for sale and was closing its doors for good.

“It’s the end of an era,” said retired Court of Appeals Judge Dale Cathell, the Ocean Pines author of “Empires of the Crab,” a 2004 homage to the local Phillips family and their global contribution to the crab industry.

The words were pointed, albeit cliche, but likely never rang more true for a resort establishment’s cessation.

“The Phillips family has made the difficult decision to sell our Phillips Crab House property in Ocean City, Maryland, and the location has now permanently closed,” the post said. “Over our 66 seasons in business, we’ve served millions of families, vacationers and OC locals, and our family feels so fortunate to have earned the loyalty of our guests, who came back year after year to build their vacation memories with us. Thank you for being such a wonderful part of our story.”

Later in the week, the company reported that the property is under contract for sale.

In the heyday of the franchise, proprietors Brice and Shirley Phillips were virtually the king and queen of Ocean City — and the Crab House was the Windsor Castle of 21st Street.

“Brice and Shirley Phillips were true Ocean City icons and they created a seafood experience that became synonymous with Ocean City,” Mayor Rick Meehan said this week in an email in response to the closing. “Thousands of high school and college students have worked at Phillips over the years helping to pay for their college educations and becoming part of the extended Phillips family.”

The family’s story really began, according to Cathell’s book, when Shirley Flowers first laid eyes on Brice Phillips, a local waterman, when they were both children living on Hooper’s Island in Dorchester County. The two were smitten with one another from the start and embarked on a love story that eventually led to the opening of the crab house in 1956.

A “shoe string operation” from the start, as Cathell wrote, the restaurant started with humble roots in a former hardware store building next to Buck Griffin’s, which was at the time the resort’s only crab house.

Cathell said the Phillips’ decided to get into the restaurant business after struggling with sales and operations at a plant they started on Hooper’s Island after Brice returned from World War II.

“They used to sell [crabs] all over in the Baltimore market until the people in Baltimore started taking advantage of them, so then they opened their own restaurant in order to sell their own crabs,” Cathell explained.

The family hit the ground running, even putting their two young sons to work in the front of the house, to develop what began as a crab takeout business. Before too long, they realized the demand was for dine-in, and they began building a small empire, eventually taking over the larger crab house next door and adding dormitory style housing for workers.

Eight years after opening, the family expanded the space to 1,400 seats, making it the largest restaurant in the state of Maryland at the time.

“Phillips was certainly a landmark in our town; so many visitors made it a part of their tradition when visiting,” said Susan Jones, the executive director of the Ocean City Hotel-Motel restaurant Association, in an email. “To say Brice & Shirley Phillips made an impact of many lives would be an understatement. So many teenagers worked at Phillips Crab House and truly learned the value of hard work and communication skills.”

The Phillips brand took off smoothly from there, growing eventually to a booming corporation that holds a reputation for top-notch customer service and employee care.

In the 1960s and ‘70s, the family created a cost-share program for long-term employees that Cathell’s research said has made many workers wealthy, with some even classified as millionaires, from the benefits. The family offered competitive life and health insurance plans as well, which were rare for restaurants during that time.

“It’s been a way of life more than a job. It’s not really a job, but a way of life when you work for Phillips,” said longtime employee William “Semore” Dofflemyer in Cathell’s book in 2004.

Dofflemyer passed away two years later at the age of 64.

The Phillips family has made countless charitable contributions in the community as well, all of which the owners were too humble to talk about with Cathell in 2004.

While the hospitality and charitability of the Phillips family brought many people through the restaurant’s doors over the years, the food undoubtedly played a significant part in keeping them coming back.

From Brice’s perfectly crafted steamed crab recipe, which Cathell said was the source of pretty much all crabs sold and eaten in restaurants across the resort during the local Phillips operation’s prime, to other seafood recipes, the menu was expansive and well revered.

“Please the customer. If they wanted it, we’d prepare it, and on the menu it would go,” Shirley said at the time.

Over the years, the menu transitioned to a buffet style, which likely did not help in keeping it afloat during the covid-19 pandemic.

Before the owners announced the closure this week, the Phillips restaurant on 21st Street was only one of two free-standing brick and mortar Phillips eateries still in operation. Now, there’s just one, in Baltimore at the Inner Harbor.

Seven smaller restaurants also still exist inside airports along the East Coast and two operate inside casinos. The Phillips Food arm is still thriving as well, with everything from crab cakes to soups to spices available in grocery stores.

The family also expanded its factory operations overseas to parts of Asia, India, Mexico and continues with those interests.

“We remain firmly planted in Maryland and will dedicate our resources in support of our Baltimore restaurant location, Baltimore culinary center and the growth of our retail, club, food service, and international business,” the Facebook post said.

At one time, the Phillips family operated three restaurants in Ocean City — the original at 21st Street, the Phillips Seafood House on 141st and Phillips By the Sea inside the now-shuttered Beach Plaza hotel at 13th Street. The 141st location closed in 2018, after one season of operating as a Mexican cantina, and the 13th Street restaurant closed in the late 2010s.

The Phillips Beach Plaza Hotel on 13th Street continued operating for several years after the restaurant closed, even welcoming another local restaurant operator for a while, but closed for good at the beginning of this year.

The family bought the property in 1967, when it was one of the primary Boardwalk hotels, according to Cathell’s account. The property was recently tapped to become part of a planned, 13-story Margaritaville resort, but progress has slowed on the project as developers grapple with obtaining a city-owned alley that is needed to make it work.

The family also opened free-standing restaurants in Annapolis, Rockville and Silver Spring in Maryland, Norfolk in Virginia, Myrtle Beach in South Carolina and Atlantic City in New Jersey over the years.

And while the Phillips brand will continue in other places, the sale and closure of the 21st Street property will end its more than six-decade run in Ocean City despite once having reigned over the local steamed crab supply.

The legacy began dwindling several years ago, though, with Brice’s death in 2011, followed by Shirley’s passing in 2017. Their sons, Steve and Jeff Phillips, also stayed involved in the business for years, along with other members of their extended family.

“Today the Phillips brand is known throughout the country,” Meehan concluded. “Time marches on but the memories we all have of the Crab House, the Beach Plaza and Phillips by the Sea will last a lifetime.”

(April 23, 2021) After working out a parking snag, developers got the green light this week to bring a new multi-use project to the site of th…