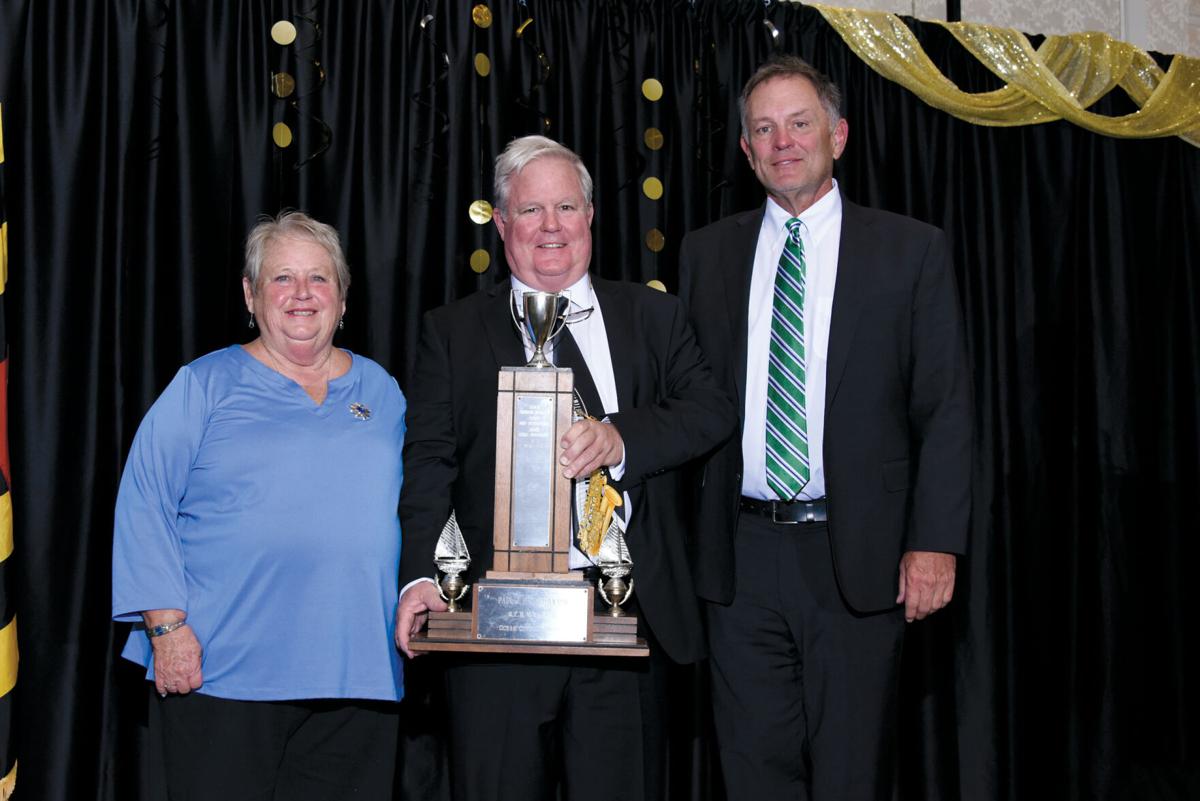 Fish Tales owner Shawn Harman, center, was presented the Paul Hazard award during the Ocean City Hotel-Motel-Restaurant Association’s 50thanniversary celebration on Nov. 19. The award is not given out every year, according to HMRA Director Susan Jones, and Harman received it because of his work for the organization and because he is an “outstanding” citizen. He is pictured with Ann Hales and Greg Shockley. 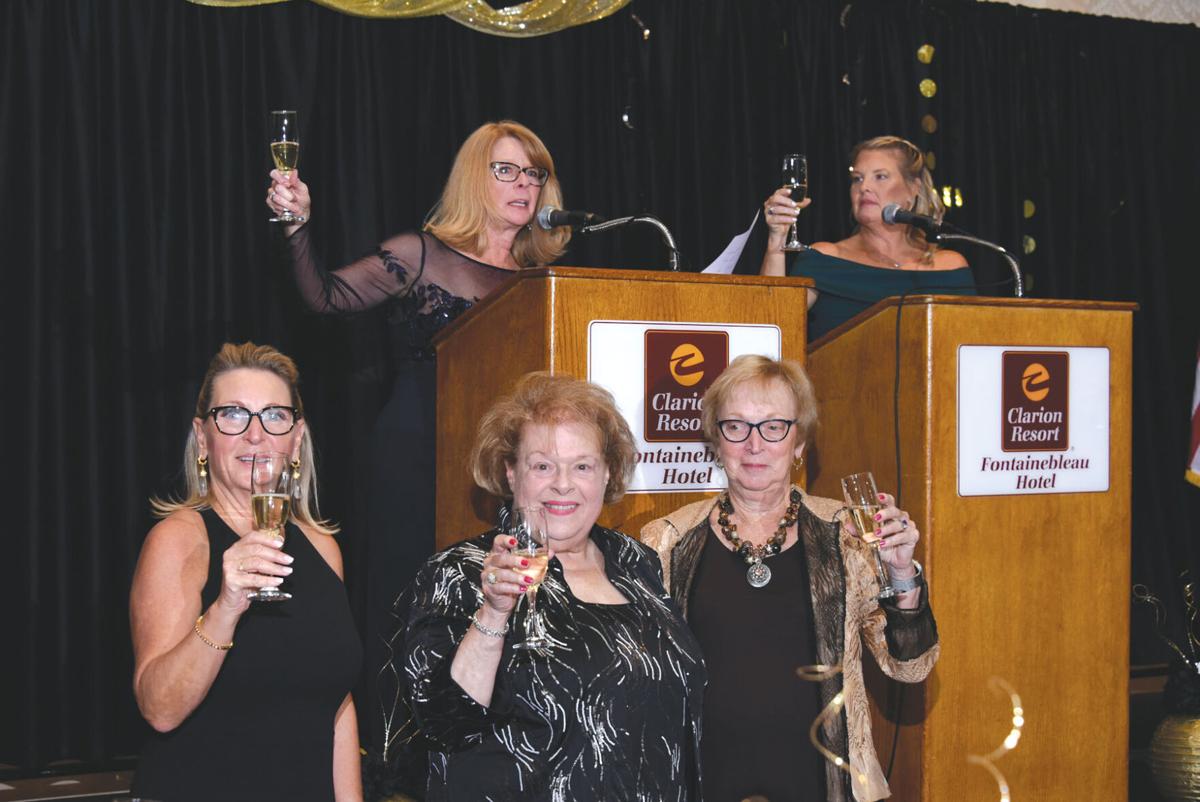 Several past presidents attended the Ocean City Hotel-Motel-Restaurant Association’s 50th anniversary celebration on Nov. 19 at the Clarion at 101st Street. Pictured, in front, from left are, Cindi Wilde, Susan Cropper, and Mary Eastman, and in back, OCHMRA Executive Director Susan Jones, and Annemarie Dickerson.

Fish Tales owner Shawn Harman, center, was presented the Paul Hazard award during the Ocean City Hotel-Motel-Restaurant Association’s 50thanniversary celebration on Nov. 19. The award is not given out every year, according to HMRA Director Susan Jones, and Harman received it because of his work for the organization and because he is an “outstanding” citizen. He is pictured with Ann Hales and Greg Shockley.

Several past presidents attended the Ocean City Hotel-Motel-Restaurant Association’s 50th anniversary celebration on Nov. 19 at the Clarion at 101st Street. Pictured, in front, from left are, Cindi Wilde, Susan Cropper, and Mary Eastman, and in back, OCHMRA Executive Director Susan Jones, and Annemarie Dickerson.

The events of the evening included an open bar, surf and turf for dinner, a champagne toast with cake, and dancing at Horizon’s in the Clarion Hotel.

The party was attended by 350 hotel, motel, restaurant, and business owners as well as others, including elected officials and tourism specialists, all there to celebrate the milestone.

The idea of the organization was spawned in 1960 when 26 of Ocean City’s businesspeople met and discussed the need for an organization to address common interests and challenges encountered by business people engaged in Ocean City’s growing tourism industry.

The foundation for the HMRA was laid out nearly a month after that first meeting and11 years later, the bylaws were written, and the Ocean City Trade Association became a reality.

The group’s first topic of concern was to create and implement a room tax, but other issues that also took precedence were things like burying utility lines and a housing project for employees – both of which are being worked on to this very day.

Susan Cropper, who purchased her first motel in 1971, joined HMRA in 1972 and served the group until 2014, when her family sold their last hotel.

Back then, Cropper said, Ocean City was filled with mom-and-pop businesses and properties. But also in those days, cellphones and the internet were science fiction.

“There was no way of making reservations,” she said. “If we had a nice weekend, the parking lots would fill.”

One Realtor at the time, Terry Hough, would tell people there were “no rooms available from Wilmington to Cape Charles, Cropper remembered, sending them from Salisbury to Cambridge and to Easton.

“We came together as a group to further the hospitality industry,” Cropper said. “We needed to work together to get tourists here and to advertise. Legislation would come up for hotels, motels, or restaurants, and we would get together to come up with an opinion. Nobody was in it for themselves.”

Advertising was the HMRA’s main goal to pull in funds, and the trade show helped bring in the money. The only other source of money at the time was membership dues, she said.

The group needed a solid source of income to be able to do more advertising and agreed to put a room tax in place as long as a part of that revenue was put toward advertising.

Cropper was recognized as a Steel Magnolia in 2007 for her work and achievements in the local tourism industry.

Susan Jones, the director of the HMRA, said the Steel Magnolias were established in 1997 after some of the women on the board suggested honoring the women who pioneered Ocean City’s lodging industry.

The board thought about what it could do to honor those women entrepreneurs, and at the time, the movie “Steel Magnolias,” starring Dolly Parton, Julia Roberts,  and several other leading women, was popular.

The movie is about a group of women who helped each other get through their issues and their illnesses.

“That’s kind of why we came up with that name,” Jones said. “We felt that the Steel Magnolias was a group of ladies that helped each other.”

In 1997, the first round of women who were honored as Steel Magnolias were Harman, Eleanor Kelly, Thelma Conner, Lois Harrison, Ann Showell and Dorothy Taylor.

“They were all my friends,” Cropper said. “The older women, I looked up to. One of those was my mother, Dorothy Taylor, and they set an example: southern hospitality at its best.

“We were just really good friends,” she added. “It was our business association and our social time, intermingled. We would go to a board meeting, and all go to lunch afterward.”

Jones said she refers to Cropper as “Miss Wisdom,” because if she ever needed anything, she would pick up the phone and call Cropper to find out how she would handle something.

The events on Friday night not only honored women like Cropper and the Steel Magnolias, but also several men who helped pave the way.

One such award that was handed out was the Paul Hazard Award. Hazard was the HMRA’s third president, and in 1973, after being sworn in, he died suddenly.

Hazard was the owner of the Stardust Motel, where now stands the Hilton.

Greg Shockley of Shenanigans took to the stage Friday with Ann Hales, the daughter of Hazard.

Jones told the room that the Hazard award is not presented every year, but is given only when there is a deserving recipient who is an outstanding citizen and serves the HMRA well.

Shockley said there had only been 19 recipients in the organization’s 50 years of existence, including Paul Wall in 1977, Cropper in 1985, and Annmarie Dickerson in 2001.

This year, the award was given to Fish Tales owner, Shawn Harman.

On Monday, Jones described Harman as not always being the “front of the house” guy, but the type of person she can call and ask for X, Y, and Z, or if he can help with something.

“He’s that kind of person, and we thought it was time that he got an award,” she said. “He just does it, not for the glory, but because he wants to help.”

Harman has been involved in the HMRA since the beginning, Jones said, and his mom was the first president.

“It has been ingrained in his head, for sure,” Jones added.

Harman said he was completely surprised that he got the award, to the point he was nearly speechless.

“I can’t believe they kept it quiet that long,” he said, adding that Jones went so far as to not give him a program that night because the award was listed inside. “I’m incredibly honored.”

When Harmon looks back at the HMRA, he had nothing but praise for it and its people.

Everyone really works together with a common goal of getting people to Ocean City – that’s the first goal, he said. Once people get to the resort, the individual businesses can sell them dinner, French fries, drinks, or rides on the Boardwalk. But the ultimate common goal, Harman explained, was getting the tourist to Ocean City.

“We have a tremendous group of people in the hospitality industry in Ocean City,” he said. “Everybody helps everyone out.”

Harmon joined the HMRA board the same year Jones started as the executive director for the organization.

Jones herself received accolades on Friday as well.

“Well, I busted my ass for over 27 years,” Jones said on Monday. “It feels good. It feels really good.”

She said she was 26 years old when she was hired as the executive director of the HMRA. In fact, Cropper was on the hiring committee that hired Jones.

“I was the only one who wrote a thank-you note to the hiring committee, which kind of put me to the top of the pot,” Jones said. “I grew up here, so this is my passion, and I can’t imagine doing anything else, which is probably why I put my heart and soul into it.”

Jones said before becoming the director, she worked five jobs in five years out of college.

After graduating from Towson University, Jones went on to jobs in public relations, insurance sales, food sales, and hospitality.

Jones’s mother saw an ad for the position in the newspaper and told her about it right away.

“She said, ‘You better put your name in for this because it sounds like something you’d love,’” Jones said. “She was right. Mom knows best.”

Cropper said the biggest strength of the HMRA is that past presidents continue to serve the group, even after their terms expire.

She also credited the group for always planning where the organization goes every couple of years.

After watching the HMRA grow for 50 years, Cropper has seen things like the introduction of the internet and cell phones completely change the tourism industry.

In 50 years, the tourism industry could look entirely different than it does today.

Cropper offered her advice to the future generations who may join or take the helm of the HMRA: “To keep on as they have been doing and to work closely with one another.”

This story appears in the print version of Ocean City Today on Nov. 26, 2021.

Some clouds this evening will give way to mainly clear skies overnight. Low near 30F. Winds NW at 10 to 20 mph.

Partly cloudy skies during the morning hours will become overcast in the afternoon. High 44F. Winds NNW at 5 to 10 mph.