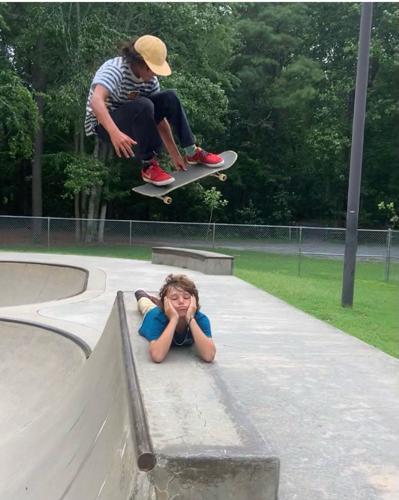 Gavin Knupp is seen here posing for a picture as a friend jumps over him on a skateboard. His mother, Tiffany, recently attended a meeting with OPA President Doug Parks and director Colette Horn during which she pleaded her case to have the Ocean Pines skate park renamed for Gavin, while the OPA countered with a yearly award in his name. 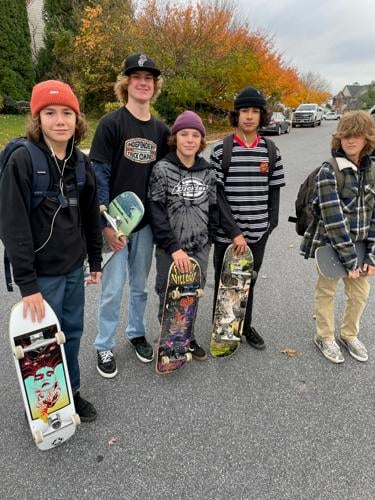 Gavin Knupp, center, takes a picture with local skater friends. The Knupp family has maintained for months that their wish to rename the skate park is comes from their goal to raise substantial funds to improve it, as the park is a significant landmark in the community for their family and Gavin’s memory.

Gavin Knupp is seen here posing for a picture as a friend jumps over him on a skateboard. His mother, Tiffany, recently attended a meeting with OPA President Doug Parks and director Colette Horn during which she pleaded her case to have the Ocean Pines skate park renamed for Gavin, while the OPA countered with a yearly award in his name.

Gavin Knupp, center, takes a picture with local skater friends. The Knupp family has maintained for months that their wish to rename the skate park is comes from their goal to raise substantial funds to improve it, as the park is a significant landmark in the community for their family and Gavin’s memory.

Ocean Pines Association officials said they were stunned this week after Tiffany Knupp, whose son, Gavin, was killed in a hit-and-run accident in July, publicly and angrily rejected an offer by two board members to honor her son with an annual award in his name.

According to a statement issued Wednesday by the OPA, Association President Doug Parks and board member Collette Horn emerged from a private meeting with Knupp on Monday believing they had agreed on how Gavin would be remembered in the community.

Instead, the statement continued, Knupp posted a commentary on social media that suggested board members were being influenced by gifts from the Yacht Club restaurant operators and telling them to “Please kindly take the meaningless award and shove it up your asses.”

However, Tiffany Knupp said the press release omitted quite a bit of pertinent information, including that the idea to rename the skate park in her son’s memory came not from her, but Ocean Pines General Manager John Viola.

“Before this meeting, I had a couple of meetings (with the OPA), first with (OPA President) Doug (Parks) and (director) Rick Farr, then with the GM (John Viola),” she said. “This all started because I reached out to John to do a fundraiser for the skate park. We talked and I told him we wanted to give back to the community and he said, wouldn’t it be amazing if they could rename the park or put a (dedicated) bench there? It was never our idea in the first place. He suggested it. We then started the whole process. He runs it by some people, calls me back a couple of days later, says they could push this through.”

Furthermore, this was the impetus for the founding of the Gavin Knupp Foundation. Tiffany Knupp said that Viola asked her if they had a foundation, explaining that they needed one for fundraising.

“That’s how it started,” she said. “To get funds to support the skate park and it kind of grew from there.”

But the more time went on, Tiffany Knupp said, the less responsive association leadership was. A planned fundraiser was on the calendar — Saturday at 45th Street Taphouse Bar and Grille — and quickly approaching, and a plaque they ordered was still in progress. It takes four to eight weeks for the plaque to come through, and they were running out of time.

“They made me feel uneasy,” Tiffany Knupp said. "I put the application in to rent the park and they literally stopped responding to me.”

It wasn’t just her, either, she said, adding that in recent weeks the OPA has ignored hundreds of messages from association homeowners and even more comments from individuals online urging them to rename the park.

According to the OPA’s statement, the meeting between Parks, Horn and Knupp concerned her request that the skate park be renamed for her son and her belief that the board opposed the idea. The OPA’s statement made no mention of how Parks and Horn responded to that assertion, but said, “At the conclusion of the meeting, she agreed that a motion for the annual award be put on the agenda for the upcoming board meeting, then hugged Director Horn and shook hands with Director Parks as she left. We felt that an agreement by all parties had been made at that point.”

Refuting the press release’s denial, she added that in the meeting on Monday, they clearly related to her that OPA’s ongoing relationship with the Matt Ortt Companies was a factor.

“They were basically like you’re coming after the Matt Ortt Companies and we don’t feel comfortable renaming the park … They said, ‘Oh well, we still have a contract with them,’” Tiffany Knupp said.

“My son is dead. If he had been hit by anybody, I still would have done this. The renaming of the skate park shouldn’t have any weight on the Matt Ortt Companies.”

Tiffany Knupp didn’t deny either that she hugged Horn, but explained it was about exercising a modicum of professional decorum and wasn’t meant to insinuate she was OK with the proposed compromise.

“I did not leave there saying it’s OK,” she said. “I said it’s a great idea and if this is all I can get then that’s that. But this is not honoring Gavin and this is why.”

“It was not a good meeting at all. I was completely railroaded. They didn’t care about me. I cried the whole time and they didn’t give a s—.”

As for the award, Knupp said the foundation is already doing outreach efforts like that, such as scholarships in Gavin’s name.

“We’re doing those things already that’s not why we’re doing this,” Tiffany Knupp said. “The point is to improve the skate park because it’s an eyesore and to make it more family-friendly. Just make it a better place, but they don’t care. They offered the award to pacify me. By the end of the meeting, they asked to put up a Facebook post saying I agreed to this and I said no. They’re trying to shut me up.”

The Matt Ortt Companies, until recently, counted among its partners Ralph DeAngelus, in whose name the car believed to have struck and killed her 14-year-old son was registered. Police have released little information beyond that as their investigation of the July 11 accident on Grays Corner Road in Berlin continues. In the meantime, the company reported last week that it had severed all ties with DeAngelus and family members the company employed at the Yacht Club.

The OPA’s statement also rebutted the implication that the Matt Ortt Companies opposed renaming the skate park, saying the company had stated otherwise more than once.

Another fundraiser is scheduled for Wednesday at the Sterling Tavern to benefit the Gavin Knupp Foundation as well as local youth Gabrielle Bennett, who is in need of kidney surgery.

Matt Ortt Companies announce the immediate termination of its partnership with Ralph DeAngelus and relationship with Tyler Mailloux and his mother Kearston Frey.

Partly cloudy skies during the evening will give way to cloudy skies overnight. Low 41F. Winds SW at 5 to 10 mph.