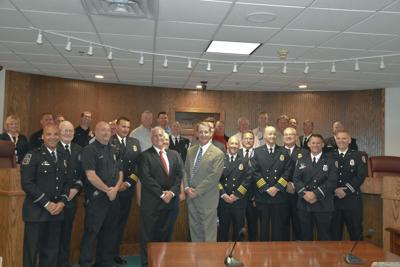 (June 14, 2019) The hunt for Ocean City’s next fire chief concluded this week with the confirmation of Rich Bowers, a four-decade first responder veteran who previously filled similar roles in Montgomery County, Maryland and Fairfax County, Virginia.

Chief Bowers was introduced after being confirmed before the mayor and City Council work session on Tuesday.

While expressing gratitude to receive the nod to assume the resort’s top fire official position, Bowers sounded prepared to hit the ground running.

Speaking on Wednesday, City Manager Doug Miller expanded on the hiring process that began following the departure of former Fire Chief Chris Larmore, who resigned in March and who was the first chief of the combined paid department and volunteer company.

“We teamed up with the volunteer fire company and in the first phase we developed a profile of our new chief,” he said.

Those solicitations yielded 77 applicants on a list that was pared down to a top 10 with input from volunteer fire company leadership, Miller said.

Miller said a half a dozen of the applicants were external candidates, with the balance coming from the resort operation.

“For the external candidates, it was a three-part process,” he said.

After providing the outside contenders with a tour of the resort’s fire facilities, all candidates sat for a panel interview, Miller said.

“The thing [panel members] all had in common was that I trusted their judgment and intellect, but they viewed things from a slightly different perspective,” he said.

The first round of interviews whittled the list to three candidates who were vetted prior to sitting for a second in-depth interview with Miller and Budget Manager Jennie Knapp.

“All 10 could have done the job and were well prepared,” he said. “We were in a no-lose situation.”

Miller presented Bowers’ resume and proposed his nomination during the last council work session on May 28.

“Rich is the right guy for us at the right time,” he said. “Council was impressed with his resume and background.”

Miller noted the multitude of career progression Bowers has achieved after four decades in the field.

“He told the story yesterday that … he actually was hired at 17 and a half [years of age] to work and had to be 18,” he said. “He started as a firefighter and EMT and worked up through 12 more positions.”

Miller said after serving for 35 years with Montgomery County Fire and Rescue Services, the last five as chief, Bowers filled the same role in Fairfax County, Virginia for a comparable time before resigning last spring.

“They have a combined department like we do, but obviously bigger,” he said.

“He is only the second chief we’ve had for the combined Ocean City fire departments,” he said.

For his part, Bowers expressed a desire to form a connection with volunteer and career firefighters, as well as community members and business owners.

“The only thing I ask of the men and women of the department is just do your job, it’s that simple,” he said.

Miller said Bowers will attend the OC Air Show this weekend and anticipates taking the reins by the end of the month.

Partly cloudy with afternoon showers or thunderstorms. High around 80F. Winds E at 10 to 15 mph. Chance of rain 50%.