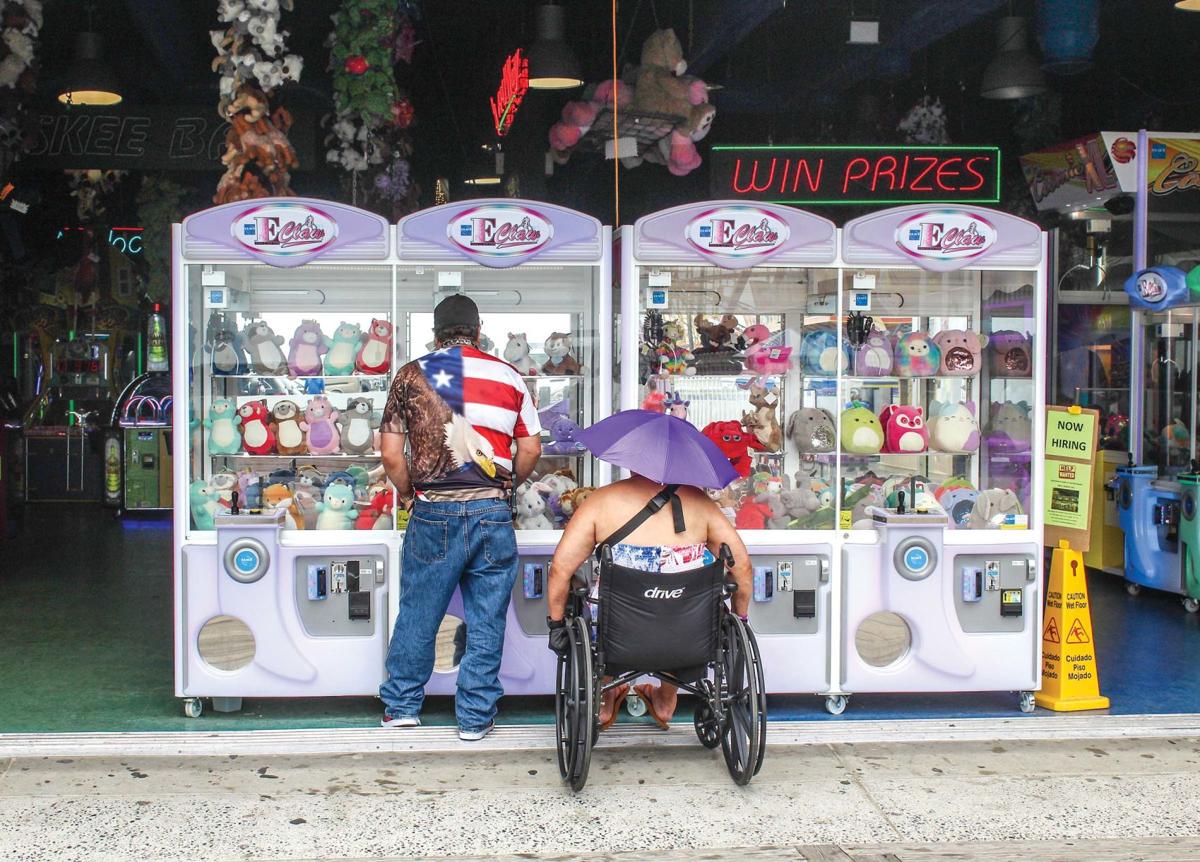 In true American fashion, a duo, peering at coveted claw machine prizes, decked themselves out with patriotic symbols — American flags and a bald eagle with a piercing gaze — to celebrate Independence Day last Saturday. 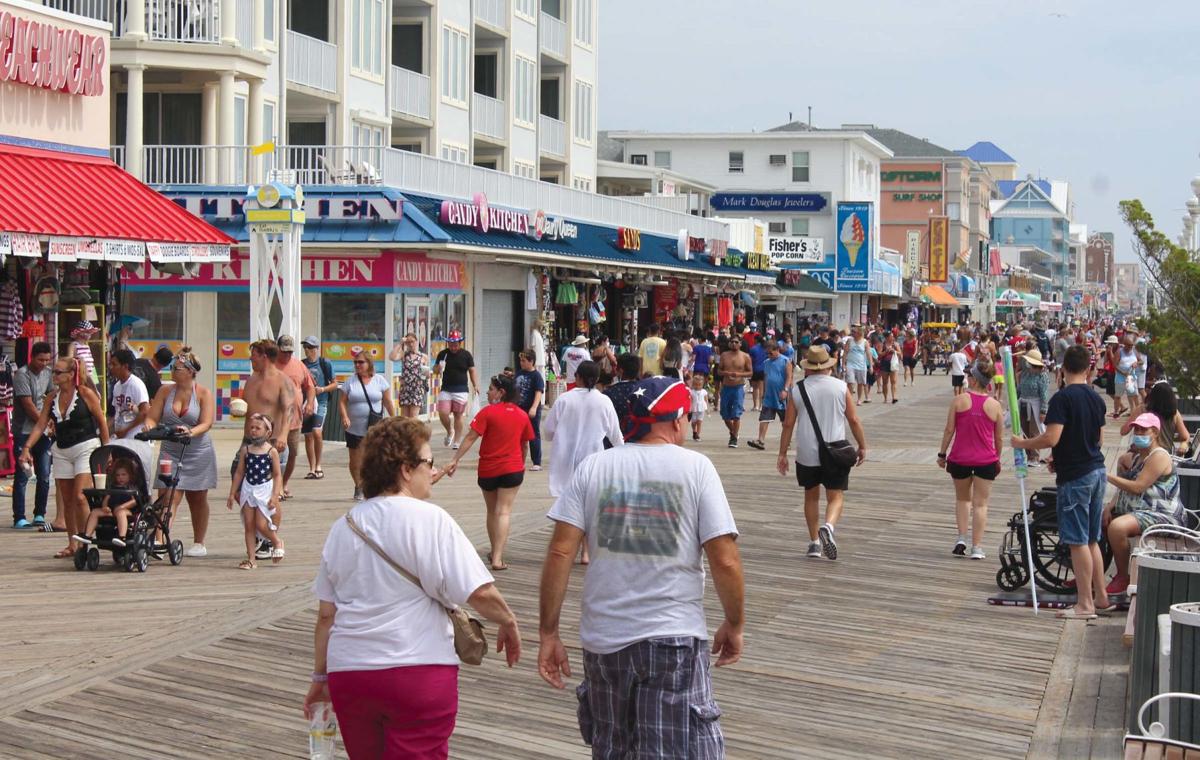 Despite initial overcast weather conditions, guests flocked to the resort the morning of July 4 to celebrate Independence Day on the Boardwalk. 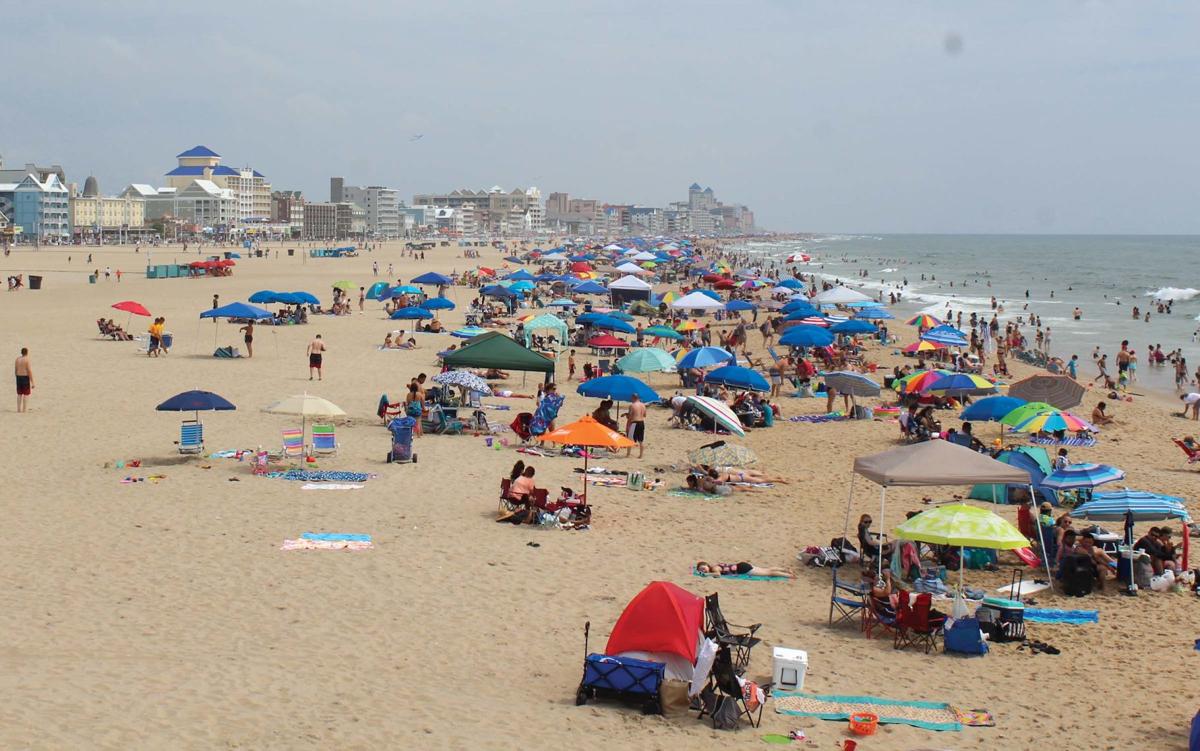 Beach goers packed the downtown beach area to celebrate the Fourth of July. 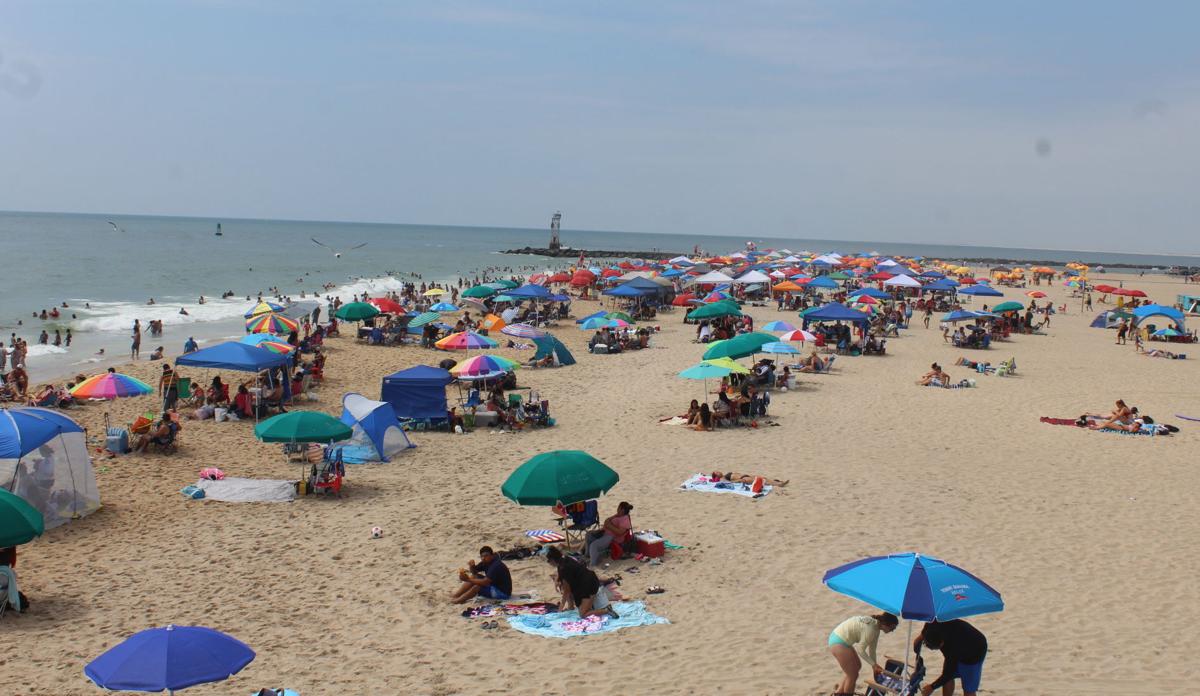 The sun started to peek out around noon on July 4, allowing guests to enjoy another stellar day on the beach.

Parking at the downtown inlet lot was not as busy as last year, with revenues coming in at $42,076.25 compared to $73,130.75 last Fourth of July weekend. However, after adjusting for the rate difference, $3.50 and $5, respectively, the drop was much less dramatic — around 18 percent. 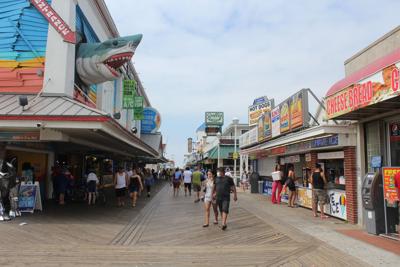 (July 10, 2020) Ocean City checked off another Fourth of July last weekend, and in spite of challenges posed by the novel coronavirus, resort officials and business owners considered the holiday a success.

“We had a very busy holiday weekend,” Ocean City interim Tourism Director Jessica Waters said. “The nearly perfect weather, combined with the holiday falling on a Saturday, made for a perfect time to travel to the beach.”

As Waters said, the resort couldn’t have asked for better weather this weekend, as temperatures soared into the 80s and skies were clear by noon on July 4.

Guests paid a total of $42,076.25 to park in the inlet parking lot, which was down from last year’s $73,1130.75, but a big portion of that drop was the result of a reduction in this year’s per hour parking rate. Adjusting for the rate difference, $3.50 this year and $5 last year, the city saw a much less dramatic 18 percent decrease in parking revenue.

Parking aside, hotels were packed, despite initial concerns that postponed fireworks would stymie the number of bookings.

“Hotels were very busy over the weekend, with many selling out,” said Susan Jones, Ocean City Hotel-Motel-Restaurant Association executive director. “The weather was stellar and the pent-up demand to get out of the house is quite evident.”

Jones said there were no apparent discrepancies as to where in town guests were staying — even condominium parking lots seemed full.

Aside from hotels, other businesses also appeared to have enjoyed a fairly good weekend under current circumstances.

“It was a very busy weekend,” said Nancy Schwendeman of the Ocean City Chamber of Commerce. “I have only talked to a couple of general businesses so far, and it seems [as if] things went well.”

Schwendeman said the chamber saw proactive behavior on the part of guests, as well.

“At the chamber, we have still been receiving the calls with questions asking what procedures/protocols are in place in Ocean City, so we know that guests are thinking about covid-19 and getting information so they can make their decisions on travel,” she said.

This cognizance was apparent at Doggie Style K9 Café and OC Socks.

“We had no problems at all, our customers were very polite and nice and just happy to be in town,” co-owner Delmar Smith said, although the shops, located in the Inlet Village Shops on the Boardwalk, only saw 50 percent of its usual clientele.

Smith said this was likely because of the lack of fireworks display.

Nonetheless, operations have been running smoothly, as the shops have not suffered any staffing shortages.

“We have a lot of longtime employees that have been with us for years, so we’re fortunate in that regard,” Smith said.

Smith’s staffing non-issue seems to be a rare case in the resort.

“We are still having dire staffing shortages all over town in all segments of travel — I even saw a picture of a Pepsi manager delivering product over the weekend,” Jones said. “Hotels were as prepared as they could be, Some have been able to pull employees from other cities where they operate hotels to assist with the demand here, while others are only opening the number of rooms they can service.”

For the restaurant industry this past weekend was a mixed bag, as capacity remains halved.

“For us, we didn’t see the traffic that we would typically see on a holiday weekend,” said Michelle Torres, Phillips Seafood Restaurants corporate director of Marketing and Business Development. “We were busy, but not Fourth of July busy.”

The restaurant, located on 20th Street, does not have room for exterior seating, which has hindered its operations.

Nevertheless, guests were excited to be back, Torres said, and appreciated the steps Phillips had taken to social distance and sanitize.

“Our reviews were great, and many people commented on how they were excited to see the cleanliness and the things we were doing,” she said.

“We had a great Fourth of July weekend. We were very happy with the turnout, and we have been very successful in trying to keep everybody safe and healthy,” she said.

Capacity restrictions and limited staffing notwithstanding, Bunting said this year’s sales were comparable to last year and that 90-95 percent of customers were patient and happy to abide to safety guidelines.

The only issue a few customers seemed to have, she said, was wearing a facemask.

“There were some that are refusing to wear mask,” Bunting said. “We won’t serve them [or] let them in. They have to wear a mask in our business, and as a proprietor, I feel like that’s the least we can do for the other guests.”

Smith, Torres and Bunting seemed to have lucked out with customers, as other businesses in the area apparently saw less-than-desirable behavior.

“This past weekend was not any different than what we’ve been seeing,” Jones said. “There are so many domestic argument incidents, those waiting in restaurant lines are bringing their own alcohol while waiting in lines, pot smoking is out of control and general rudeness and lack of respect for everyone around.”

Jones clarified she did not mean violent behavior seen earlier last month, but overall lack of patience and kindness.

As the resort continues to see more and more guests, not only does it have to contend with behavioral issues, but also with preventing the city from becoming a covid-19 hotspot.

In addition to pent-up demand, big crowds have been linked to closures of beach bars in neighboring Delaware, after that state saw spikes in some beach towns, particularly among younger adults.

Delaware follows a growing number of states that have seen surges in novel coronavirus cases, including Texas, Florida, California, Arizona, North and South Carolina and Tennessee.

Maryland, thus far, has been able to avoid joining this list of states, and has seen consistent declines or plateauing in a number of key metrics.

The positivity rate is the number of tests that come back positive, and the World Health Organization (WHO) recommends loosening restrictions when the positivity rate stays at 5 percent or lower for at least 14 days.

Nationwide, the United States hit 2.98 million confirmed cases and 131,065 deaths, as of Wednesday.

Mayor Rick Meehan has previously stated that the city must remain vigilant and be weary of becoming lured into the idea that the coronavirus was “over.”

“Of course concerns of coronavirus and large gatherings were definitely at the forefront of our minds,” Waters said. “Fortunately, our wide beaches allowed for social distancing in most areas, and our business community continues to do a great job to adhere to safety guidelines.”

Waters reminded guests, however, to play their part and exercise personal responsibility.

“This Independence Day was unlike any Fourth of July before. However, with more than 300,000 people in our resort community, we had minimal incidents and were happy that visitors celebrated safely,” she said.

Widely scattered showers or a thunderstorm early. Then partly cloudy. High 82F. Winds S at 5 to 10 mph. Chance of rain 30%.