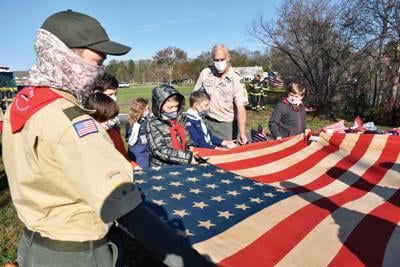 (Nov. 20, 2020) Although fewer members took part this year than last because of pandemic concerns, a sizable contingent of Boy Scouts from Troop #261 and Cub Scouts from Pack #261 performed a flag retirement ceremony at the Worcester County Veterans Memorial at Ocean Pines last Saturday.

Scoutmaster Ken Nichols said the annual ceremony typically involves up to 50 scouts but that count was cut in half last week.

“The girl troop was on a camping trip that weekend, so we were minus that troop,” he said. “There are still some parents with covid that are leery to have their kids out, so the numbers were down.”

“All the participants, if they were in scouting, they were wearing a mask,” he said.

In accordance with U.S. Flag Code, the ceremony involves scouts placing worn and torn Stars and Stripes in a fire for a respectful burning.

In an effort to be environmentally friendly, this year the ceremony eliminated burning non-cotton materials, such as nylon or synthetic polyester.

“For years, we were burning all the American flags that were donated,” he said. “Of course, trying to be environmentally friendly since we are scouts we were basically burning all cotton.”

“We probably average around 3,000 flags and we still have quite a few,” he said.

Of that number, a percentage were held back from the fire pit for further use.

“In order to dispose of them effectively,  what we do is cut the blue field, the stars, off of the stripes,” he said. “As far as flag etiquette, once you do that it’s no longer considered an American flag so at that point you can just throw it away if you are so inclined.”

The stars were attached to a notecard that said in part, “the sun and wind have caused me to become tattered and torn. Please carry me as a reminder that you are remembered.”

Tattered and torn U.S. flags were collected at American Legion Posts #166 in Ocean City, #123 and #231 in Berlin, as well as the Ocean Pines Community Center. Assisting with the ceremony were Ocean Pines Public Works and the Ocean Pines Volunteer Fire Company.

“It’s usually just a once-a year-thing because we do it in conjunction with the American Legion and the Worcester County Veterans Memorial,” he said.

The American Legion Post in Ocean City, which helped found Boy Scout Troop #261 in 1952, has continued to sponsor the local chapter.

The flag retirement ceremony, which has been held at the veterans’ memorial since it opened in 2005, has been held locally for decades, Nichols said.

“There’s a few different entities involved with getting this together,” he said. “The Ocean Pines Fire Company is usually there and Ocean Pines Public Works digs the pit and covers it back up.”

“It’s usually mid-November, give or take,” he said. “That’s what works well with us.”

“As far as Ocean Pines is concerned, we’re over the hot, dry season of summer,” he said. “With that open fire, we wouldn’t want to do that in the summer.”