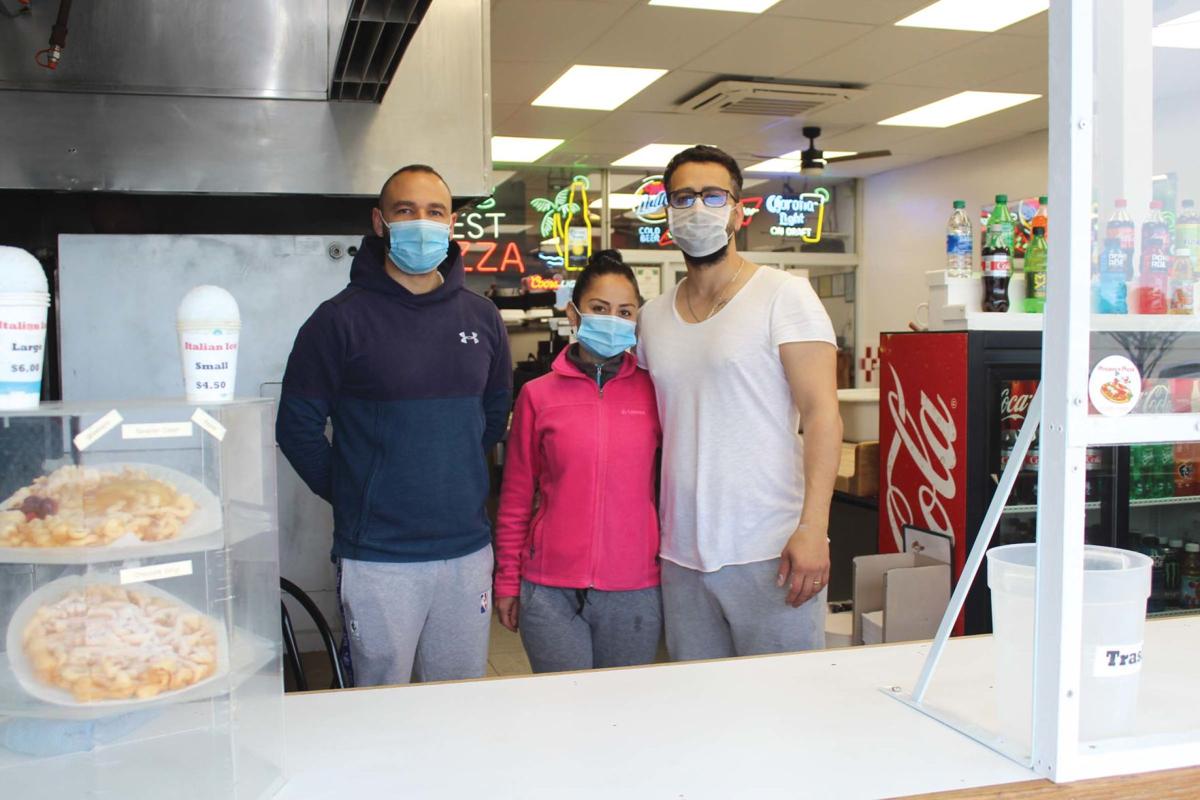 Ibrahim Aksut, left, Gamze Unal and Timur Unal pose in their family’s vendor Piezano’s Pizza on the Boardwalk. Although the family was caught off guard last weekend, Timur said it has since readied itself for busier days to come, although it is still short staffed. 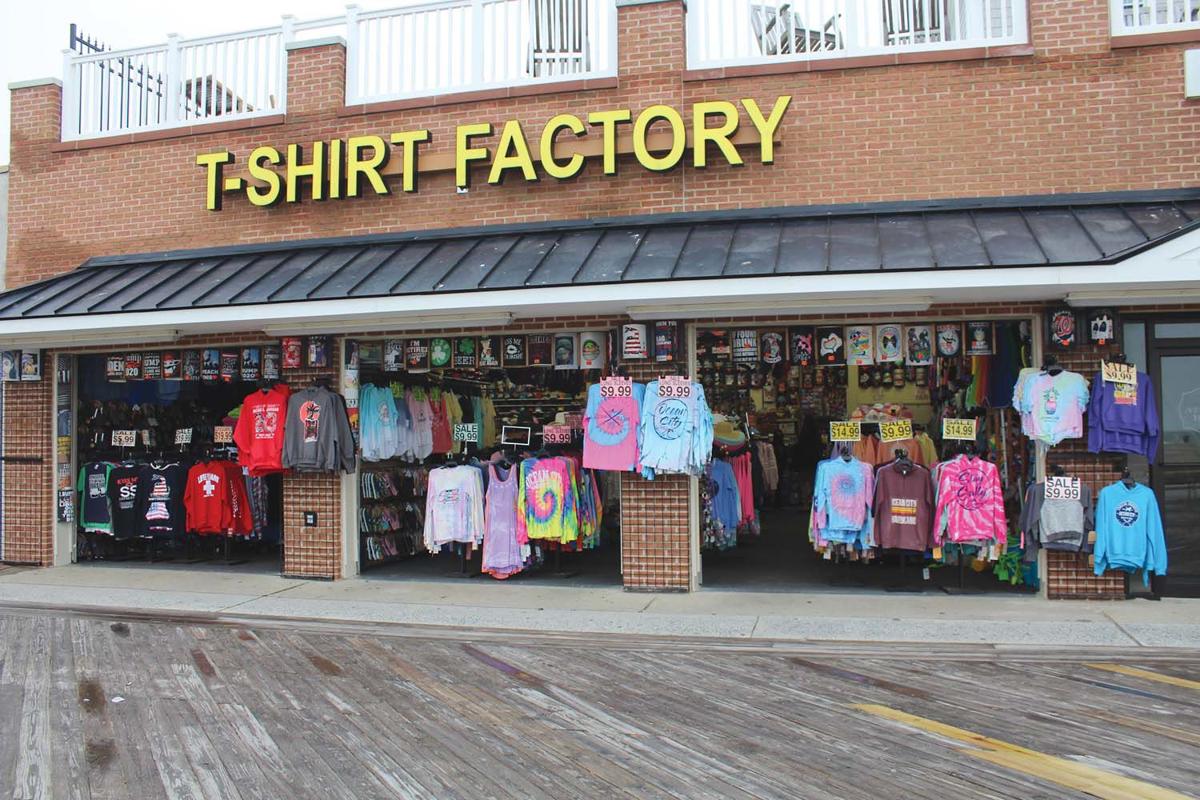 Bruce Krasner, owner of several T-Shirt Factories, said covid-19’s effect on international travel has cut down his staff line for this summer, forcing him to rely on family members to run his stores. 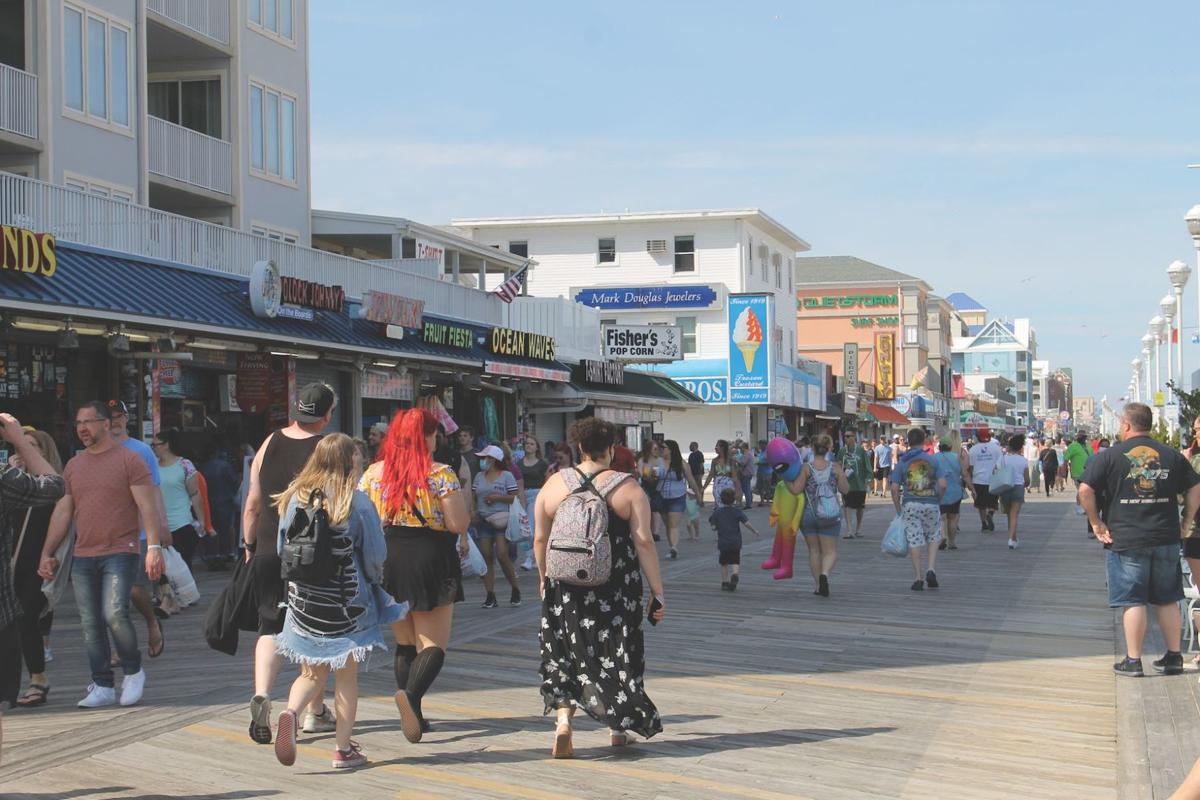 The Ocean City Boardwalk was bustling with activity last Saturday. Guests are reminded to practice social distancing, and while wearing masks outdoors is not required, the town does suggest a face covering for personal safety. 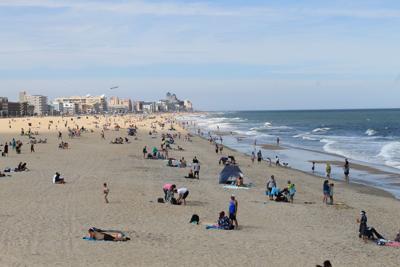 (May 22, 2020) The confluence of great weather and an easing of local and state covid-19 restrictions filled the beach, the Boardwalk and the streets of Ocean City with visitors last weekend.

“We admittedly were caught off guard for a multitude of reasons,” City Manager Doug Miller said Monday night. “We thought we were still in a soft opening mode … this weekend was far from a soft opening, as everyone is aware.”

Kicking off Friday afternoon was the arrival of foreign and modified car enthusiasts who spent the weekend racing on Coastal Highway, despite the cancelation of the Spring Cruisin’ Ocean City event.

Although police reported that crime did not go up dramatically, they were certainly occupied with keeping order in some areas.

“We had a full complement of officers on patrol this weekend to maintain peace and order,” said Ashley Miller, police deputy communications manager. “When you consider that this should have been the Spring Cruisin’ Event, it was not as busy as it has historically been.”

However, police did request aid from the Ocean City Transportation Department on Saturday to block the entrances of the Ocean City convention center parking lot on 40th Street.

Bartlett said a police lieutenant contacted him around 3:30 p.m., and by 4:30 p.m. drivers and pedestrians strolling by the convention center would have seen buses blocking the entrances to the parking lot, as well as orange cones at the adjacent overflow lot.

While the buses prevented motorists from entering the lot, the cones, not so much, and Bartlett said the lot was quickly overtaken.

While police dealt with the car racers in the streets, resort public works staff had to deal with harsh online criticism concerning overflowing trashcans on the Boardwalk.

Of the 30 people in the maintenance division, a portion of those employees are streamlined into specialized tasks, Adkins said, such as sign technicians, further reducing the number of available maintenance staff available for cleanup to 12 full-time, and eight part-time employees.

There also were other factors to consider.

With restrictions on restaurant services, customers no longer had the option to throw away their garbage on site, and public receptacles became the only option available.

“We had a number of trashcans that appeared to be overflowing like a snow cone, but when you removed the pizza box there was a big void below it, and the bottom of the trashcan was completely empty,” Adkins said.

Maintenance crews clean the Boardwalk trashcans every morning from 6-10 a.m., and beginning this weekend evening crews will be deployed.

In short, the stellar weather and the loosening of travel and lodging restrictions created the perfect storm, Adkins said.

Adding wind to this storm was the fact that aside from Boardwalk businesses, little else was open throughout the resort as a result of restrictions still in place by Gov. Larry Hogan.

“The main issue was that the only activity was beaching and walking on the Boardwalk,” said Susan Jones, Ocean City Hotel-Motel-Restaurant Association executive director. “That pushed everyone to the Boardwalk, which goes against trying to spread people out.”

The weekend did prove somewhat fruitful for the 37 or so hotels or motels that were open, with some seeing full bookings and others at 35-45 percent capacity.

Jones said this weekend, almost all lodging establishments would be open, but none fully booked — with occupancy ranging from 20-50 percent, as of Wednesday morning.

While normally no one would blink an eye at crowds of this size mid-May, now is not normal, and some business owners did not expect people to waltz right back to the resort so quickly.

“It was nowhere near what we anticipated, it was extremely busy,” said Timur Unal, manager and part of the family that owns Piezano’s Pizza on the Boardwalk.

Unal said he had believed people would be too afraid to venture out so soon following the governor’s decision to lift the stay-at-home order last Wednesday, and the store had not been stocked sufficiently to handle the sudden influx of visitors.

For Anna Dolle Bushnell, the owner of Dolle’s Candyland, Hogan’s announcement to enter phase one came too little notice.

“We were not prepared in that when we got the news on Wednesday it was not enough time to get all of our staff back. So we were only able to open one shift,” she said, despite being sufficiently stocked on sweets and eager customers abundant.

“We usually work with maybe 20 people, now we only have four, which is family. It’ll be tough, but hopefully [we’ll] get through it,” Unal said.

This staffing issue is partly the result of international travel restrictions, which have kept the resort’s usual seasonal employees, J-1 students, from returning.

Bruce Krasner, owner of several T-Shirt Factory stores, said he also had to employ family members after 60 percent of his J-1 staff said they couldn’t come, and the other 40 percent said they were uncertain.

Not all business owners’ experiences were the same, however.

“We were 100 percent prepared, and we’ve been working for the last month getting all of the [safety] protocols set,” said Yvonne Meyer, manager and co-owner of Somerset Jewelers on the Boardwalk.

“Of course, we had quite a few that were not happy, that felt like they had their rights taken away from them by having to wear masks in the inside, and you know you’re going to have some people, of course, who don’t want to follow the rules,” Bushnell said. “But like I said, the majority did, and the majority were grateful that we had what we did have in place and had no problems whatsoever.”

Regardless of the chaotic nature of last weekend, business owners expressed their gratitude for the income it provided, during months of economic uncertainty caused by the pandemic.

Unal urged visitors, however, to be responsible and respectful, and to do their best to prevent an outbreak that could shut down businesses again.

“We need this, we need our place open,” Unal said. “Just like everybody else — everyone needs financial guarantee. Imagine, if you can’t open the restaurant for one summer, we don’t know what to do. We have a lot of staff that we need to pay for, [and] we have ourselves obviously and the restaurant has to be going.”

However, a not-so-great weather forecast for this weekend may dampen the influx of guests to Ocean City.