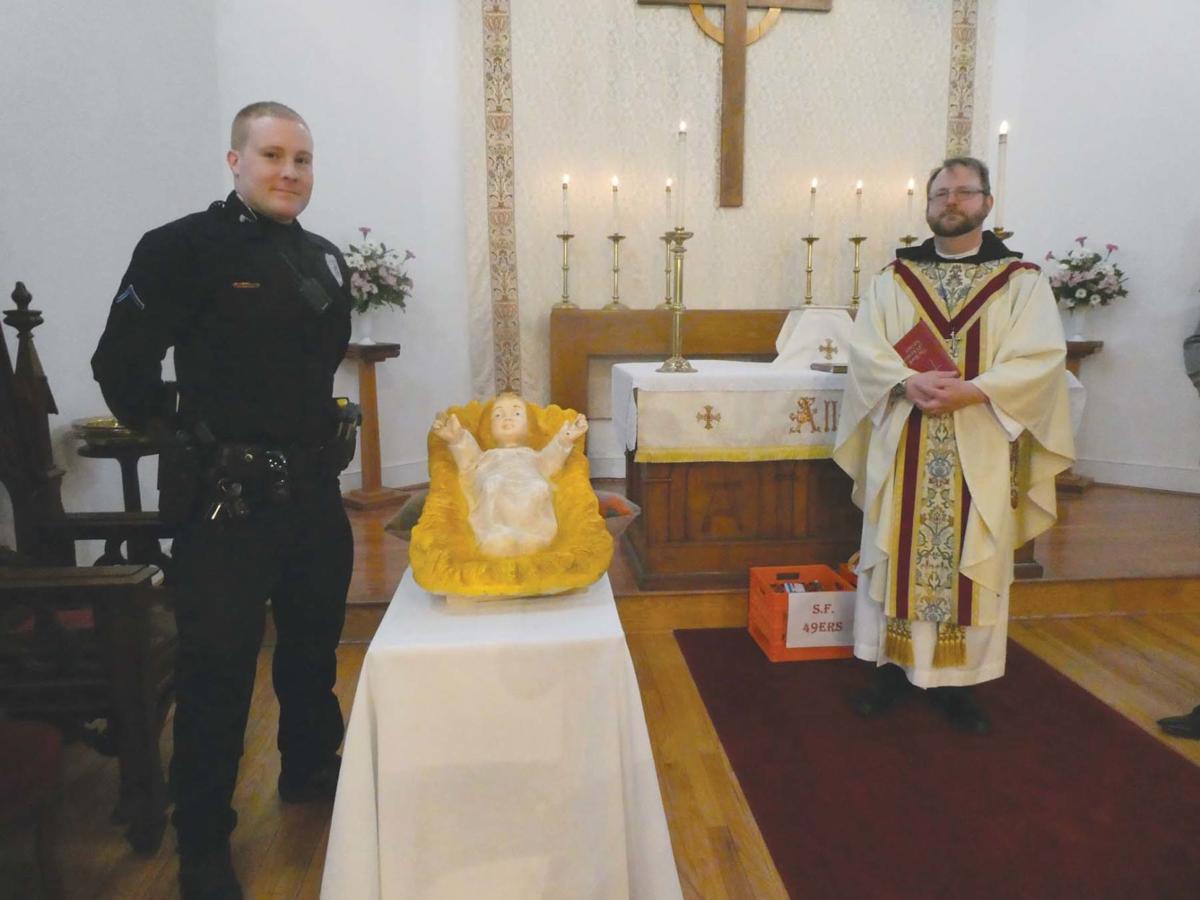 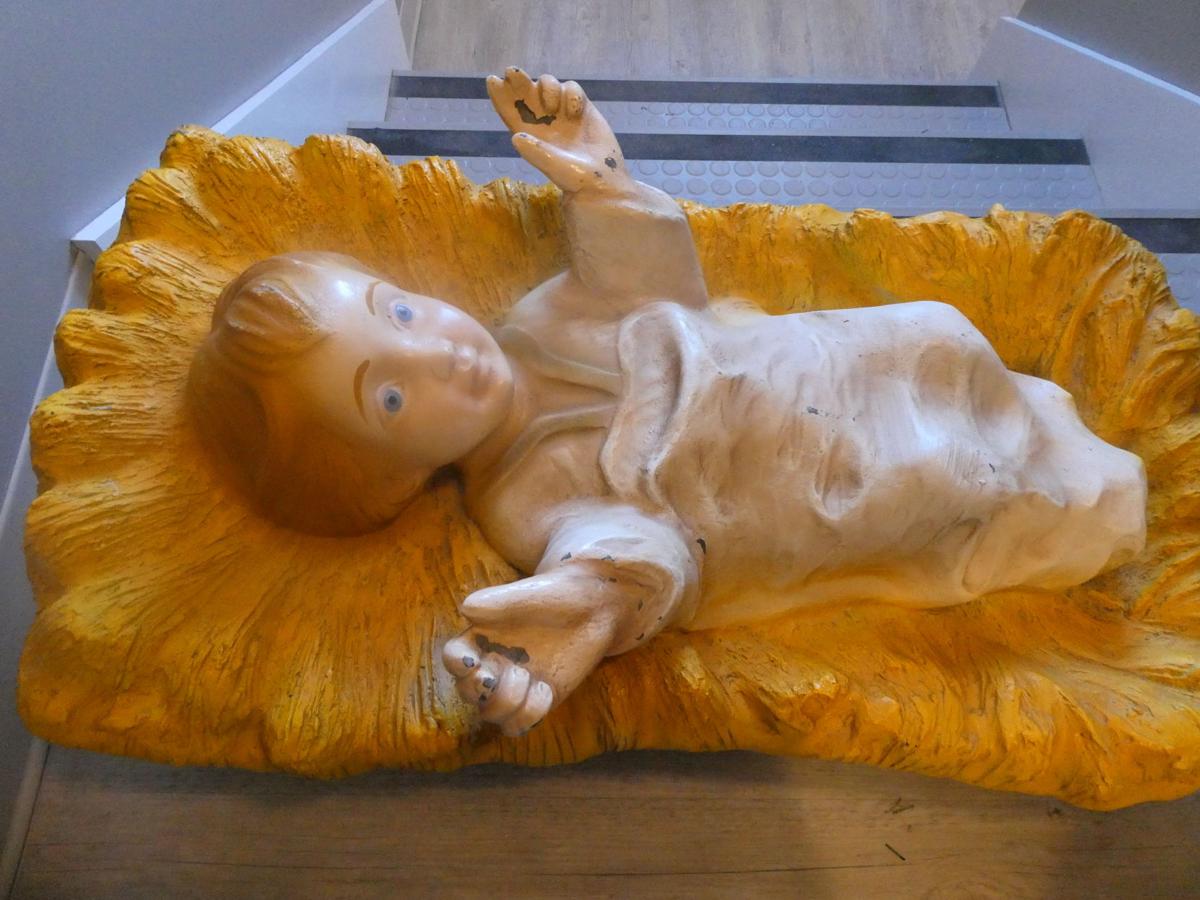 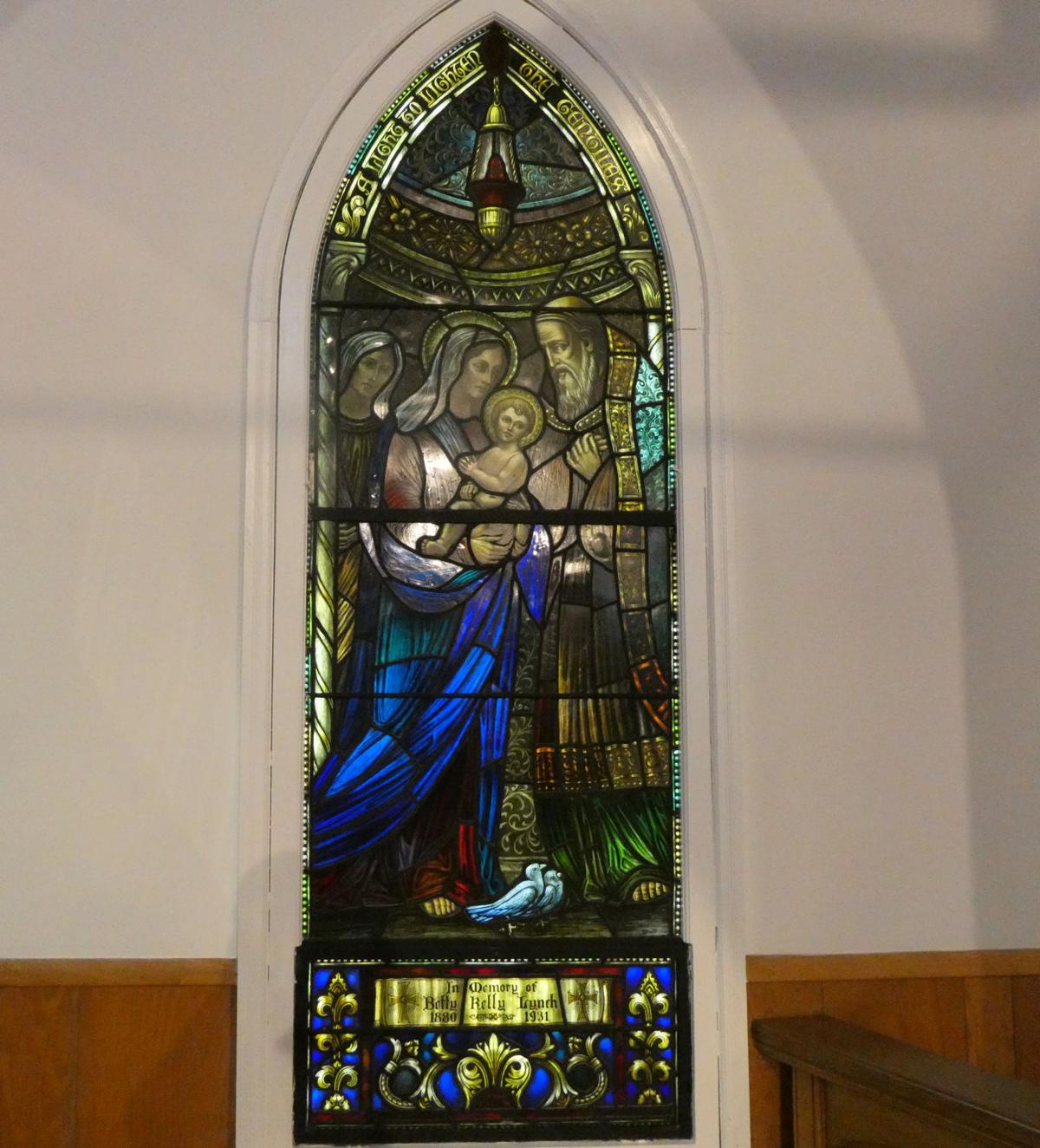 This stained glass window in St. Paul's by-the-Sea Episcopal Church depicts the celebration of the presentation of baby Jesus in the Temple. 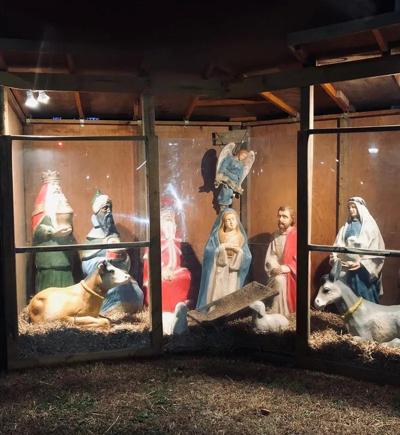 OCPD detective tracks it down after theft last year

(Feb. 7, 2020) It was a year ago in December that a mysterious person was caught on security footage stealing the baby Jesus figure from St. Paul’s by-the-Sea Episcopal Church’s annual Nativity installation.

But this past Sunday, Father Matthew D’Amario said before the service began, “I declare this baby Jesus statue restored to the use for which it has been dedicated and consecrated.”

The church, located on Third Street and Baltimore Avenue, puts up the manger scene around Christmas in tandem with the Ocean City light show. But goodwill apparently was in short supply in December 2018, as the infant went missing.

“We have plastic in front of the scene to protect the blow-up plastic figures in the manger,” D’Amario said. “We realized in late December, after Christmas, that the baby Jesus in the manger was gone.”

Footage recorded by a surveillance camera showed someone climb over the plastic, take the baby Jesus figure and disappear down Third Street.

Originally, the team published the photos to law enforcement sources, but came up dry.

The photos were then published on the Ocean City Police Department’s Facebook page, and, after local newspapers published the photos, police received a tip from a server.

“The waitress advised us that she waited on a group the night before the theft, which included the suspect,” Snyder said. “From there, we were able to obtain the person’s information who paid the tab, but from reviewing photographs of that person, it was obvious that this person was not the suspect.”

This stumped Snyder, who thought the suspect might get away with the theft.

But by conducting more witness interviews, he obtained a partial name and used police databases to find a match.

“I viewed the suspect’s past booking photographs and was confident that he was the same person observed in video surveillance of the theft,” Snyder said.

Police identified Cameron Coke, 43, of Towson as the primary suspect, and a trial was set for Jan. 8.

“Soon before Coke arrived at District Court, he was notified by his attorney that he was not needed for court that day because the case was going to be postponed,” Snyder said.

Coke then drove to the inlet parking lot, where police conducted a traffic stop because he had been driving erratically. Police reported he had been under the influence of narcotics, which Coke confirmed.

“The officers located CDS in Coke’s possession, arrested him and searched his vehicle. Within the bed of the truck they located the missing statue of baby Jesus,” Snyder said.

Coke admitted his involvement in the theft and said he had intended to bring the statue to St. Paul’s or the police department that morning.

“Like many investigations, the successful result of this one would not have happened had it not been for the assistance provided to me by the community,” Snyder said. “I appreciate the recognition that St. Paul’s by-the-Sea gave to me during its service on Feb. 2, but it was my pleasure solving this case and returning the stolen property to them. This incident should not have happened, but it did and the community provided whatever assistance its police department needed to solve it.”

Despite having the statue early last month, D’Amario, and other members in the know, decided to wait until last Sunday to reveal its return.

“Feb. 2, in the church, is the celebration of the presentation of baby Jesus in the Temple,” D’Amario said. “… Jesus, because he is the Son of God, goes into the Temple, which is his homecoming. So we thought Feb. 2, being a Sunday, would be an ideal day to re-present our statue to our congregation.”

The statue is a seemingly popular item to steal, as this was the second time baby Jesus was removed from the manger.

The first time occurred before D’Amario’s tenure with the church began in August 2016.

Then, somebody apparently had thrown it into the ocean, but like Moses coming out of the Nile River, the baby Jesus washed onto shore near the inlet, D’Amario said.

“The baby Jesus is the central figure of our manger scene, and frankly it’s the smallest item in the scene, as well,” D’Amario said. “We see these as pranks, not as a hate crime or not as a statement against the church, but as a crime of opportunity at the worst. We’re just glad nobody was hurt.”

Before Sunday’s mass, officer Harry Miller, flanked by Snyder and Capt. Ray Austin, carried the statue to the front of the cathedral and laid it down for D’Amario to conduct a Restoration of Things Profaned ceremony.

D’Amario thanked the trio, as well as the Ocean City Police Department as a whole for their efforts in returning the statue.

“We are very grateful to the police … [and] in the spirit of his [Jesus] teachings, we certainly want to extend forgiveness and reconciliation and our prayers to the suspect,” D’Amario said.