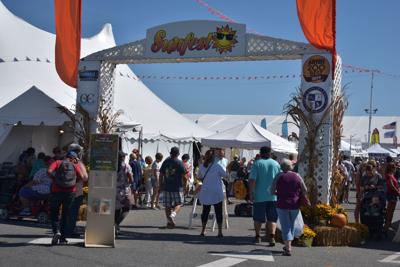 (Jan. 17, 2020) For more than four decades, Ocean City has hosted its Sunfest events on the third weekend after Labor Day in September. That will change in 2020, after resort officials announced last week that the signature event would be held in October, instead.

“Due to the leap year calendar in 2020, the event was scheduled to coincide with another large event,” City Communications Manager Jessica Waters said in a press release. “The City Council voiced concerns about combining Sunfest with the motor event, both which draw thousands of people to Ocean City each year.”

The event Waters is referring to is Ocean City Bikefest, which is slated for Sept. 17-20.

While the city has had its ups and downs with the bike event, perhaps more worrying was another, unsanctioned car event that arose out of the remnants of the “H2Oi” car rally following its relocation to Atlantic City.

The decision was made behind closed doors.

“It was regarding law enforcement deployment, which is why it was set for closed,” Office of City Solicitor Heather Stansbury said.

Councilman John Gehrig said the decision was the right move, and his only complaint about the situation was how long it took.

“People get why the decision was made,” Gehrig said. “There have been objections … [but] those are consequences of the core objection of why did it take so long.”

Gehrig had apologized for what he deemed the council’s inaction toward the unsanctioned event at a heated council meeting last October, and urged his peers to tackle the issue more aggressively.

Initially, there was buzz on social media following the city’s announcement last week, but overall the reaction has been mild, city department heads said.

“At first people were just questioning it and why the decision was made,” Ocean City Chamber of Commerce President Melanie Pursel said. “However, once it was explained, they were fine with the changes. It’s been pretty quiet the last few days, no guests are really complaining.”

Pursel said the business community did have concerns about being fully staffed in October, as most of the J-1 student employees would be gone by then.

Nonetheless, Pursel said with several months’ notice the issue should be resolved by then.

“Naturally, we have been receiving oodles of calls concerning moving Sunfest to the first weekend of October,” Jones said in a press release. “Change is never easy, though sometimes it turns out for the best.”

Jones went on to say City Special Events Superintendent Frank Miller was already in contact with Sunfest vendors, and that entertainment had yet to be completely booked.

She added the date change would also move the city toward its goal of extending the season and boosting the economy.

“Honestly, the feedback has been that members realize the need to adapt and that hosting two enormous events would be way too taxing on city services,” Jones told Ocean City Today. “Additionally, many folks like the fact that it will stretch the season by one more weekend — which was Sunfests’ original intention.”