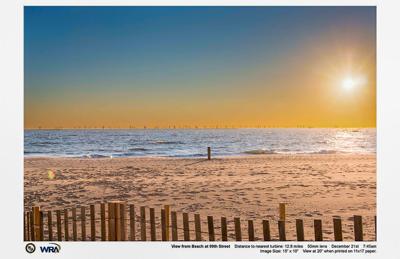 (Jan. 17, 2020) With the public hearing on the size of the offshore wind farm turbines just days away, a recent decision by the Maryland Public Service Commission allows the Town of Ocean City to play a more active role in the inquiry process.

The public hearing will be held on Saturday at noon in the Roland E. Powell Convention Center on 40th Street.

Up until now, the city has been more of an aggrieved spectator than a player in the offshore wind farm approval process, but the PSC’s decision will mean it can participate fully if additional evidentiary hearings are held. In that situation, the city would be able to file and present testimony, have the right to demand information, and the right to cross-examine witnesses.

What is scheduled to take place this Saturday, however, is not that kind of hearing.

It is part of a larger inquiry that will examine the decision by two prospective wind farm operations, Ørsted’s Skipjack Wind and U.S. Wind, to increase the size of their wind turbines, and its possible effects on Ocean City’s coastal aesthetic.

Residents, visitors, proponents, opponents, city leaders and stakeholders will have the opportunity to voice their opinions at the hearing.

City officials see this session as an opportunity to turn the tide on a project they contend will harm the resort’s economy.

Mayor Rick Meehan explained the city’s position in a letter distributed by the Ocean City Chamber of Commerce on Monday, Jan. 13.

“It’s no secret that our resort community is unlike anywhere else,” Meehan said. “Our 10-mile, beautifully maintained beach and historic Boardwalk often rank among the nation’s top beaches … Unfortunately, our natural viewshed is in danger of being changed forever.”

Meehan goes on to describe how the 12-megawatt turbines are as tall as the Chrysler Building in New York City — three times the height of the tallest building in Ocean City, with blades larger than the Statue of Liberty at 351 feet long.

“If this project is built as proposed, our current unobstructed views to our natural horizon will have wind towers impeding our clean coastal view,” Meehan said.

The wind farm project has been years in the making, with a state task force created in April 2010 to examine the possibilities.

The General Assembly then passed the Maryland Offshore Wind Energy Act in 2013, which would create an 80,000-acre wind energy area between 10 to 30 miles off the resort coast.

The wind farm area was divided into two lease areas, one near Delaware and the other near Ocean City.

In 2017, the Public Service Commission issued conditional approvals to U.S. Wind and Skipjack Wind to construct the turbines, and the two companies have been moving forward since.

The city had once been a wind farm development ally, voicing its support as early as 2013. But that changed when a rendering of the turbines was presented during a March 2017 public comment session held at Stephen Decatur Middle School.

Meehan said at the meeting that he had been shocked by the visual impact on the coastline view, which had been greater than he had anticipated.

“We need to find ways to mitigate the visual pollution,” he said at that meeting.

Thereafter, the city has fought to have the turbines pushed at least 30 miles off the coast, even though that distance would put them outside the federally established lease areas.

However, the bills faced pushback.

“There are two corridors of vessel traffic which converge just to the west of the [lease] area,” said James Bennett, Bureau of Ocean Management renewable energy program manager during a set of General Assembly hearings held in March that year.

He also said depths in the city’s proposed range increased significantly, which would create a poor foundation for the wind towers.

Perhaps most important was the fact that any distance beyond 24 nautical miles would place the turbines outside the leasing area U.S. Wind purchased in 2014 for $8.7 million.

HB1135 failed to pass in the House Economic Committee in 14-5 vote, effectively killing the two bills.

Early August 2019, a group known as the Lower Shore Progressive Caucus issued a press release hoping to draw attention, and support, back to the controversial wind farms.

“The offshore wind [project] brings two unique opportunities,” Caucus Chairman Jared Schablein said. “Number one, one of the biggest public policy issues that we are going to face for years … is climate change and sea level rise.”

Schablein told Ocean City Today that wind turbines would be a direct response to global warming, and would be needed to minimize the negative consequences of climate change, such as sporadic flooding.

“The second thing is, for decades here on the Eastern Shore we have struggled to bring good paying jobs and industries to the region,” Schablein said. “By bringing offshore wind here you have the opportunity to bring skilled labor back, good paying jobs and give a good reason for younger generations to stay.”

As reported by Ocean City Today, job creation was one of the main conditions set by the Public Service Commission when it approved the two wind companies’ projects.

The commission stated in a report that U.S. Wind was required to create at least 1,298 in-state direct development or construction period jobs, and 2,282 direct operating period jobs.

U.S. Wind must spend 19 percent of capital expenditures in the state, and Skipjack 34 percent.

Both projects were required to use a port facility in the state as the operations and maintenance port.

In addition, both agencies were required to submit ongoing, independently audited reports on job creation.

“If this project goes through, we would be the largest offshore wind in the country, meaning people would have to go to us, the Eastern Shore, for their green energy — we could finally be industry leaders again,” Schablein said.

Meehan and company have repeatedly said they support green energy and the job growth the project is expected to induce, but they also contend the potential growth will be offset by the harm done to the resort’s tourism industry.

“We support clean energy and the economic benefits associated with these projects, but not at the cost of our future,” Meehan said.