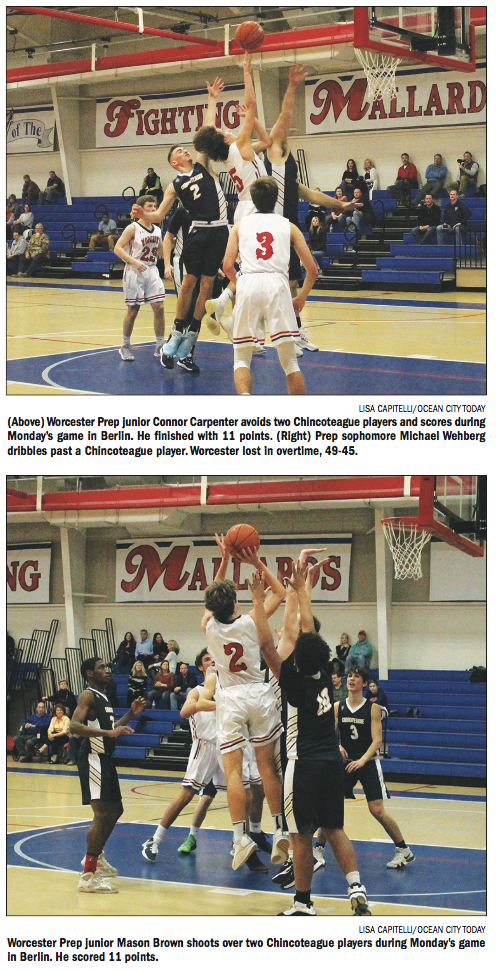 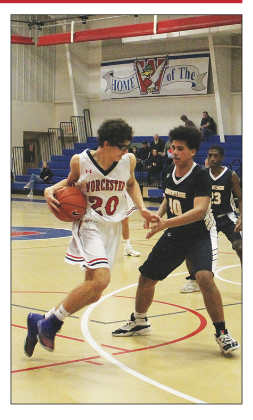 (Jan. 17, 2020) After falling in overtime on Monday to the Chincoteague Ponies, the Worcester Prep boys’ basketball team scored a big win two days later over the Salisbury Christian Jaguars.

Worcester hosted Chincoteague on Monday. After trailing most of the game, and by as much as 12 points in the fourth quarter, the Mallards started to chip away at the Ponies’ advantage.

Worcester junior Mason Brown hit a three with 51 seconds left in the game to tie the score, 38-38.

Points were traded in the overtime period, but Chincoteague came out on top, 49-45.

“The first quarter was bad. We were lethargic and didn’t really have the energy on offense or defense. The second quarter was a bit better, but really it wasn’t until the second half and especially the fourth quarter when we started to pick up the pace and get some confidence,” Prep Coach Keith Geiger said. “We fought back and showed some determination in the fourth quarter, but by then it was a little late. In overtime, Chincoteague made all their foul shots and made a key three pointer and that about sealed it.”

Worcester’s defense was solid on Wednesday in Salisbury, but the team struggled on offense. Geiger said the Jaguars’ man-to-man defense also gave his team some trouble.

“We kind of freeze up on man-to-man, because we don’t see it often,” he said.

The Mallards outscored the Jaguars, 6-2, in the first quarter. The home team pulled ahead in the second quarter. At halftime, Salisbury held a 15-10 advantage.

During the break, Geiger said he discussed with his players some way to get a few easy baskets.

Down 19-10 with just under four minutes remaining in the third, the Mallards started to battle back.

At the end of the third, Salisbury was ahead by just one point, 21-20.

“We got a couple layups off fast breaks and that sort of helped,” Geiger said.

“[Junior] Brugh [Moore] had a bunch of good shots and [senior captain] Ryan [Cronin] hit a three and those were the big shots of the game for us,” Geiger said.

Moore led Worcester with 10 points. He also have five rebounds and three assists. Brown scored eight and had three assists and two steals.

“Defense was good all game. They were trying hard and fighting, but we couldn’t get anything going offensively,” Geiger said. “We missed a ton of layups and we missed all our foul shots – we were 0-7.”

In addition to solid defense, Geiger said the Mallards’ energy was great and they played with intensity.

“It was an important conference game,” he said. “It was a good win.”

Worcester will host the Holly Grove Eagles, today, Friday, at 6 p.m. On Monday, the Prep team will play the Delmarva Christian Royals at 1 p.m. in Georgetown, Delaware.

Worcester students have semester exams next week, followed by a week off for winter break.

“We’ve been playing well,” Geiger said. “The things we can control – effort and enthusiasm – have been good so far.”