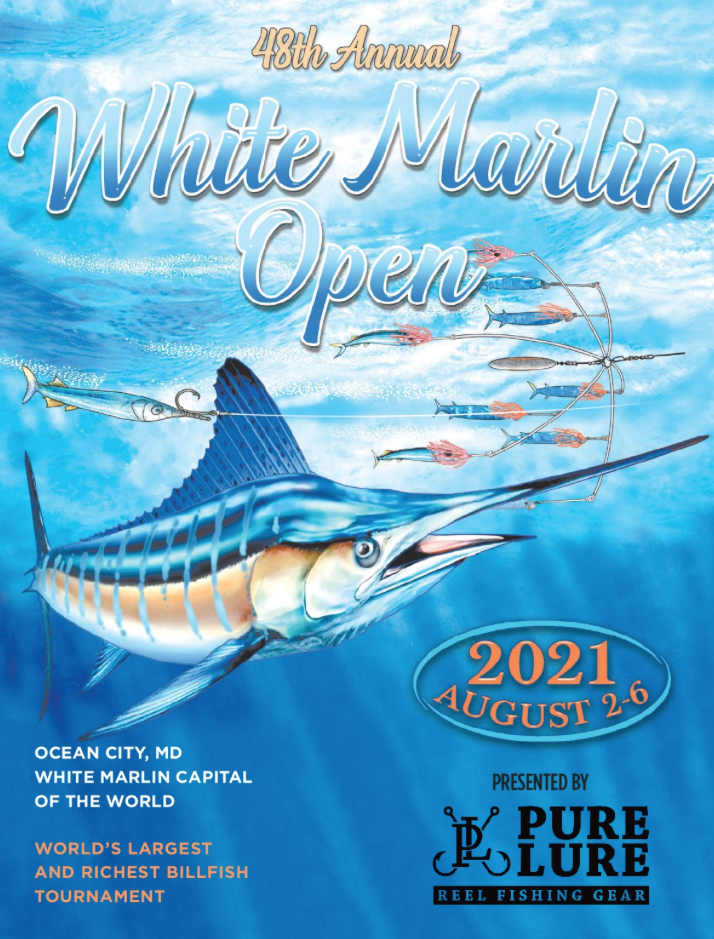 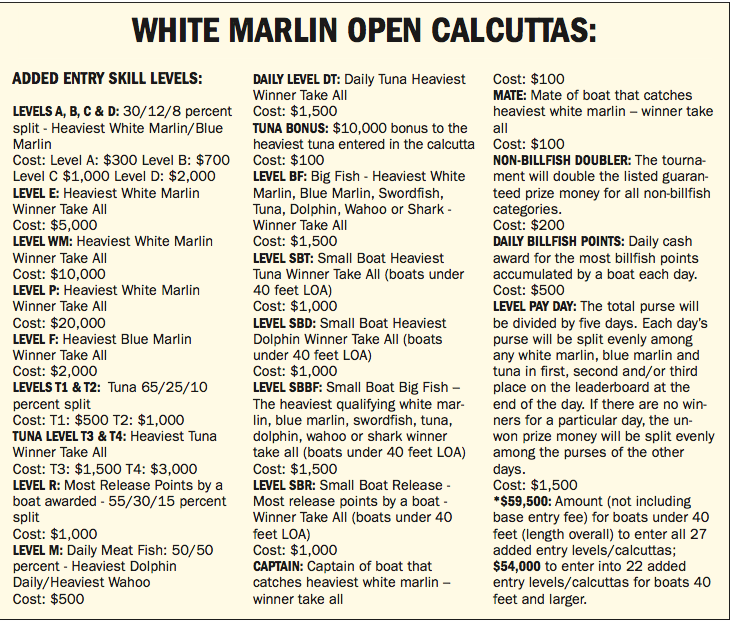 (July 30, 2021) Even during a pandemic and with a tropical storm rolling through early in the week, the 47th annual White Marlin Open in 2020 was one for the record books, and if the weather is good, organizers expect this year’s tournament to be even bigger.

A total of 433 boats entered last year, the second-highest participation in tournament history. The most was 449 boats registered in 2005. A record $6.8 million was distributed among tournament winners last year, breaking the previous record set in 2019 by over $600,000.

Jim Motsko, co-director and founder of the White Marlin Open, said that number could jump to $7.5 million this year, especially with the addition of two new added entry level calcuttas, or wagering pools.

“It seems like every year prize money keeps going up,” Motsko said. “The goal is to have more boats than last year. If the forecast is good, we should have more. The record is 449 boats; 450, I think that’s within our reach to do.”

To date, the Open has paid out more than $83 million.

Anglers on hundreds of boats will head offshore during the tournament next week in search of the coveted billfish.

“People have mostly been tuna fishing, but we’re starting to see more going marlin fishing this week (to prepare for the Open). It seems like [marlin are] starting to show up right now,” Motsko said on Monday.

Teams were encouraged to register in advance, and as of Wednesday, 220 boats had already signed up.

If teams registered on or before June 1 the base entry fee was $1,200. Pre-registration numbers are ahead of last year, Motsko said.

Most just turned in the basic entry fee, bus some have already signed up for added entry level calcuttas.

Though most crews wait until the final days to register so they can keep an eye on the forecast, typically about 65 percent of the boats traditionally return each year. Most of the anglers on those boats are the same, while there are also some changes and additions.

The base entry fee is $1,450 per boat (after June 1), which makes teams eligible for $50,000 in guaranteed prize money. There is no limit to the number of anglers on each boat.

There are 27 added entry level divisions (wagering pools or calcuttas) this year, which range in cost from $100 to $20,000 to enter.

An overwhelming majority – about 98 percent – of the teams sign up for at least one calcutta. The more calcuttas entered, the greater the possible return.

The cost to enter every calcutta this year for boats under 40 feet long is $59,500, not including the base entry fee. Boats 40 feet and larger are eligible to enter 22 calcuttas at a total cost of $54,000.

Eighty-eight boats went across the board last year.

There are two new calcuttas this year.

The Level P Heaviest White Marlin Winner Take All calcutta was added and costs $20,000 to enter.

“After they get into everything, we’ve been asked numerous times, ‘Don’t you have anything else,?’ so we’ve been adding every year,” Motsko said. “People wanted more so we put in a $10,000 winner take all (a few years ago), then we added this.”

As of Wednesday, 13 of the preregister boats had already signed up for their added entry level calcuttas. Six of them entered the $20,000 level, and are across the board.

“I have a feeling 20 or more boats will get into it,” Motsko said.

The second new calcutta is Level SBR - Small Boat Release - Most release points by a boat - Winner Take All. It is for boats under 40 LOA. It cost $1,000 to enter.

“We have a lot of boats under 40 feet that fish our tournament. They don’t feel they can compete with the larger boats, so we added another one for them,” Motsko said.

It takes a combination of luck and skill to catch a white marlin.

First, captains and anglers must know how and where to find them. From that point on, luck comes into play, as there’s no way to know whose bait might attract the interest of a big fish.

Anyone can get lucky, and that is why the Open is so popular. Novice anglers have won the tournament.

Teams may fish anywhere within 100 nautical miles of the Ocean City inlet sea buoy, but certain areas hold favor. Most boats will head to the offshore canyons — Poor Man’s, Baltimore and Washington — where large fish and Open winners have been caught in the past.

Billfish conservation is emphasized every year, as more than 90 percent of white and blue marlins are released.

A total of 816 white marlin were caught during the 2020 tournament; just 57 of them were boated.

All of the 48 blue marlin hooked were released. Seven spearfish and three sailfish were caught. None were boated.

To be a contender in the white marlin division this year, Motsko thinks a fish will need to weigh about 85 pounds.

Several 70-plus-pound billfish were weighed during the 2020 tournament.

“We had a run of big fish,” Motsko said after the event. “A vast majority weighed were round scale spearfish and cookie cutters (of each other.) We group them as one [with white marlin], but they’re two different species.”

The tournament minimum is 70 pounds, and this year the length minimum was increased from 68 inches to 70 inches.

“Hopefully it will keep the skinny fish from getting landed,” Motsko said.

To have a chance at prize money in the blue marlin division, Motsko thinks the fish will need to weigh at least 650-700 pounds. The minimum length for blue marlin is 114 inches. There is no weight minimum.

Boats can leave from any inlet between Rudee Inlet in Virginia and Barnegat Inlet in New Jersey.

All anglers will be searching for the same species: white and blue marlin, tuna, wahoo, dolphin and shark.

While the white marlin division is the most prized, there are also large payouts in the blue marlin and tuna categories. Cash prizes are also awarded for billfish releases.

Weigh-ins will take place daily at Harbour Island from 4-9:15 p.m. and are free and open to the public.

The weigh-ins will be streamed live on www.whitemarlinopen.com. Daily activity and updates will also be posted on the website and Facebook.

In addition, Marlin Fest will take place at the Third Street ballfields. The weigh-ins will be broadcast live on a jumbo screen and more than 20 vendors will be on hand.

The first White Marlin Open took place in 1974 with 57 boats registered and a guaranteed $20,000 in prize money.

The largest white marlin to come to the Harbour Island scale was a 97-pounder, caught by Brandon Golueke of Chester, Maryland, aboard Canyon Blues. It measured 77 inches in length and had a 31-inch girth. It’s the third largest in tournament history.

Crisdel angler Frank Griscola (Bedminster, New Jersey) also reeled in a 77-pounder, but since the fish was brought on board with the assistance of a gaff – a pole or stick with a hook on the end used to stab the fish and lift it into the boat – it finished in third place.

According to the White Marlin Open rules, “in the event of a tie in the weight of a white marlin, the fish that is not gaffed will be considered the winner of the two.”

This rule was implemented years ago to prevent fish from being needlessly killed and to conserve the species.

Two swordfish were weighed, the largest tipped the scale at 273.5-pounds, caught by Kyle Gagliardi of Vineland, New Jersey, on the boat Jersey Boy.

The Sentient crew took first place in the tuna division, with Frank Whirley’s (Cambridge, Maryland) 121-pounder. The fish was worth $99,000.

Even though the Restless Lady II team came in second place with Travis Ort’s (York, Pennsylvania) 114.5-pound tuna, the crew cleaned up for participating in two big added entry-level calcuttas. The fish earned the team more than $1.4 million.

The group entered the new Level Pay Day, which cost $1,500 to enter. A total of 253 teams register and the calcutta pot totaled $341,550. Each day’s purse was split evenly among those on the leaderboard in first, second or third place for white marlin, blue marlin and tuna that day for those entered into the calcutta.

In addition, Restless Lady II entered the Level F (Heaviest Blue Marlin Winner Take All) added entry calcutta. Since no qualifying blue marlin were weighed and each of the three white marlin winners as well as the first-place tuna did not enter the Level F, the money in that calcutta went to the Restless Lady II.

Not only did Matt Wagner’s (La Plata, Maryland) 73.5-pound dolphin take first place in the division, but it was also a new tournament record. The previous record was 71 pounds set in 1986.

He caught the fish, worth $22,000, aboard the Backlash. It was one pound off the state record.

No qualifying sharks were brought to the scale.