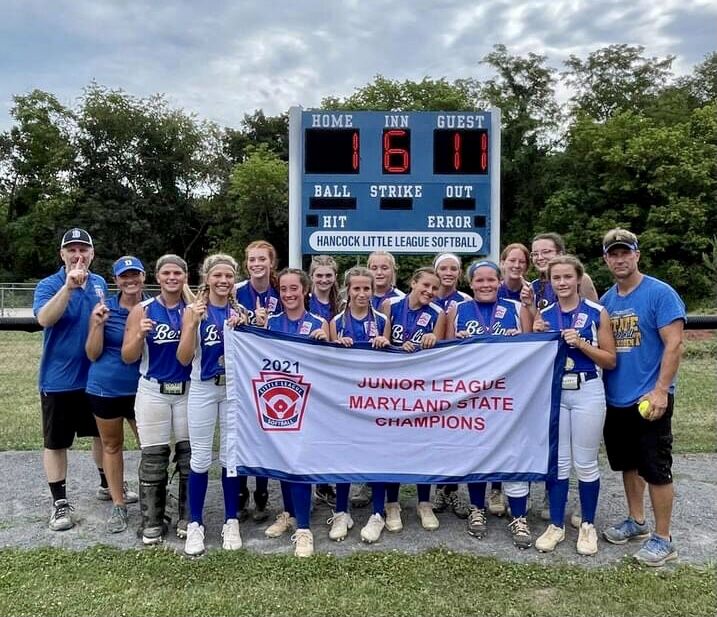 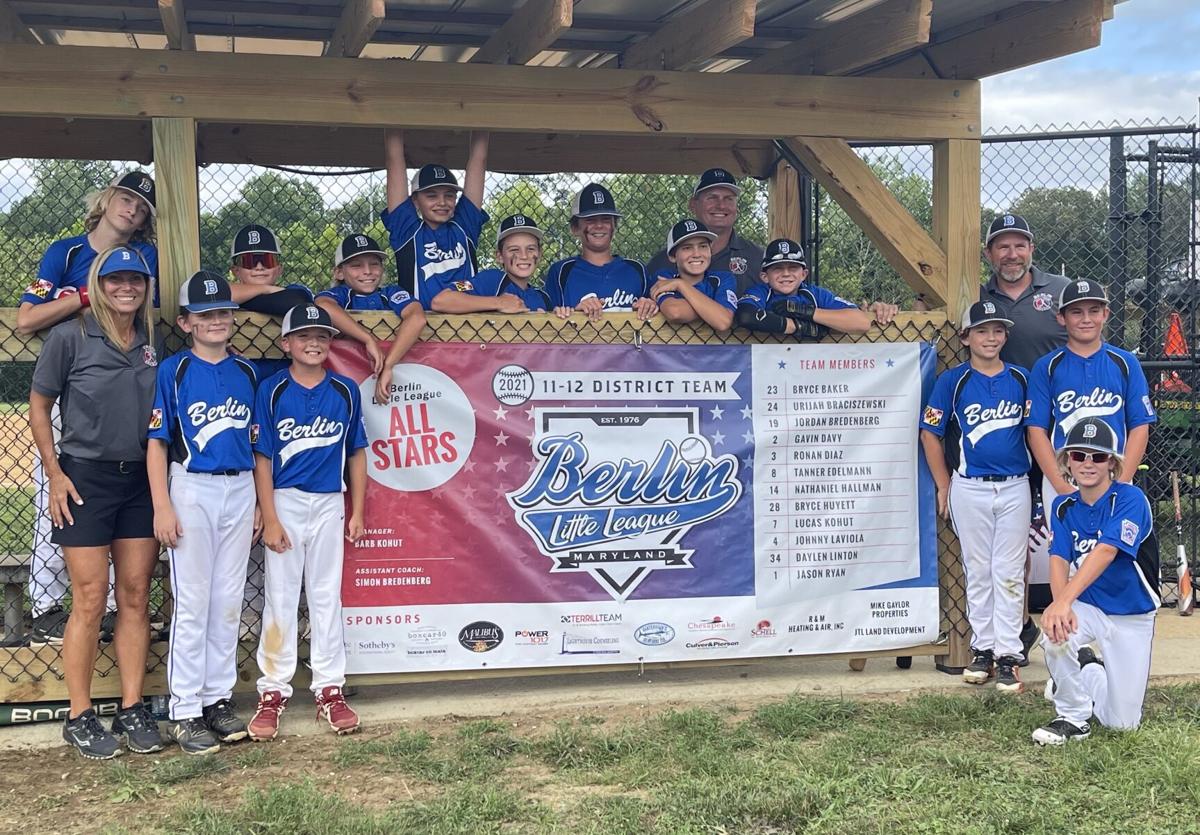 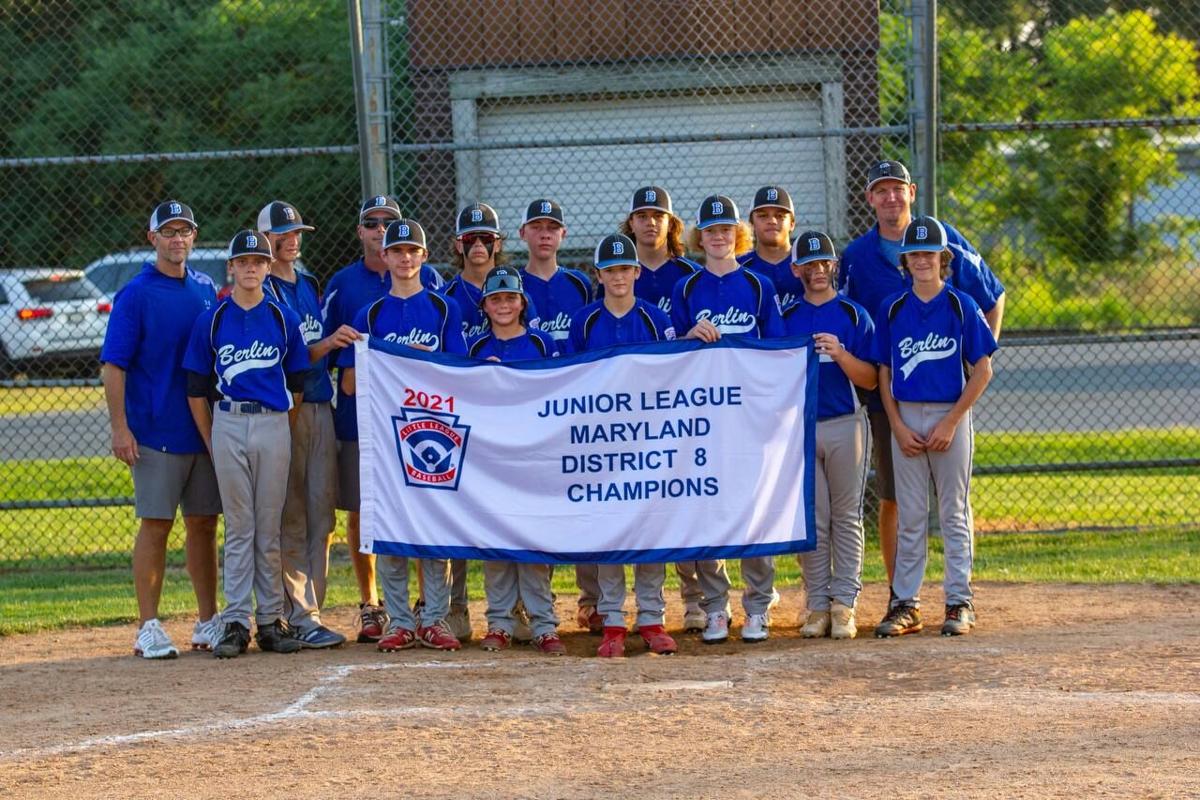 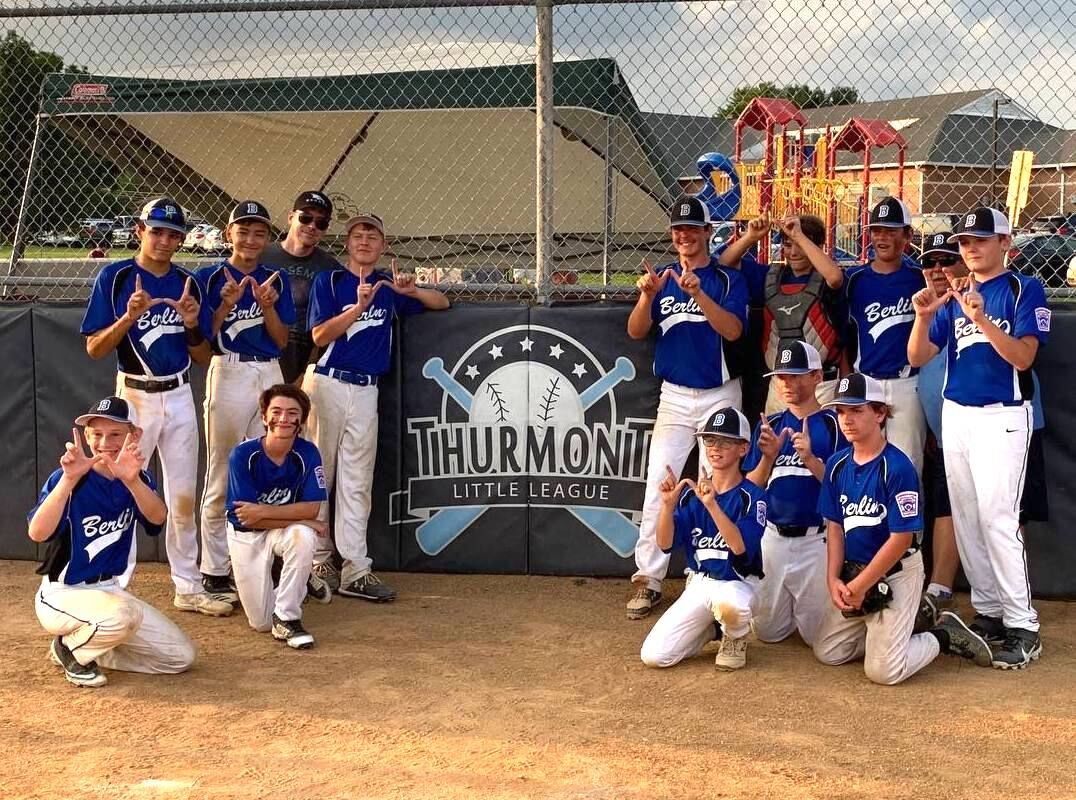 The Berlin Intermediate All-Star team battled back from a first-round loss to finish in the top two in the state in its division last week in Thurmont, Maryland.

The Berlin Little League 10-11-year-old All-Star team is all smiles during the state tournament in Salisbury last week. The boys finished runner-up in their division.

The Berlin Intermediate All-Star team battled back from a first-round loss to finish in the top two in the state in its division last week in Thurmont, Maryland.

The Berlin Little League 10-11-year-old All-Star team is all smiles during the state tournament in Salisbury last week. The boys finished runner-up in their division.

(July 23, 2021) One Berlin Little League All-Star team has already captured a state title, and two other squads are hoping to finish the season with the same success.

“They played well. We hit the ball well, we used three different pitchers and they all worked together to hold them to one run, and we had some really nice defensive plays,” said Manager Katie Griffin.

Ryleigh Smith help get things going for Berlin, hitting a two-run home run in the first. It was her second home run of the tournament.

The team also earned the championship title in 2019. There was no 2020 season because of covid. Nine of the 13 girls on this year’s team were members of the 2019 squad.

Griffin said the win was extra special with former teammate, Ali Terrill, there to cheer the girls on.

Terrill was a member of the 2019 team. She lost her mom, Brandy, to cancer this past winter and didn’t play softball for the 2021 season.

Griffin’s husband, Stan, traveled back to the shore for work between games and brought Terrill back with him as a surprise.

Katie Griffin, who also didn’t know Terrill was coming, said the girls screeched with excitement and cried when they saw her at the hotel.

“It was a special moment to have her there,” Griffin said.

She added that one of the parents made temporary tattoos that featured angel wings with the initials “BT” for Brandy Terrill. The girls wore the tattoo during the game on their left arms, Griffin said.

“It was nice to have Ali there. It made it more special to have her be a part of it,” Griffin said.

“These girls are just a special group of talented ball players,” Griffin said.

The Berlin contingent of 13 girls range in age from 12 to 14. A core group of them have been playing together since they were 6, 7 and 8 years old.

Griffin said it will be exciting to watch the girls play school softball together over the next few years. A few girls are already in high school. About half will move up next year and the rest the year after.

The Berlin Major League team is 3-0 in state tournament play in Davidsonville.

“They hit the ball very well and played great defense,” said Manager Barb Kohut. “If they were nervous, they didn’t show it. I think they’re confident and, because we practice so hard, they’re comfortable playing with each other. They’re jelling very well.”

Jordan Bredenberg “was on fire on the mound,” Kohut said, and was 3-for-3 at the plate.

Daylen Linton and Nathaniel Hallman both hit home runs in the fourth inning. They went 3-for-3 with four RBIs each.

The game was scoreless until the fourth inning when MoCo LoCo got on the board with a home run.

Hallman hit a triple in the sixth and Bredenberg scored to tie the game, 1-1. Hallman then scored on a Tanner Edelmann pop fly to end the game.

“We played perfect defensively. We turned three double plays in the game. That doesn’t happen in Little League,” Kohut said. “I’ve never seen a Little League team play defense as well as they did. It looked like they have been playing for years together in one short month.”

In order to stay under the 35-pitch count per pitcher so they can be used sooner rather than later in the tournament, Kohut used three in the game – Lucas Kohut, Jason Ryan and Linton.

“We’re so fortunate the kids can play multiple positions,” Kohut said. “They’re true athletes. They love the game and they don’t give up.”

Berlin battled District 1 Conococheague on Tuesday and pulled out at 5-4 victory.

Conococheague put two runs on the board in the first. Berlin scored one in the third and another in the fourth to tie it, 2-2. The Berlin squad added three runs in the fifth to take a 5-2 lead.

Conococheague made it 5-4 in the top of the sixth, but Berlin held them to secure the win.

“It was a rollercoaster of a game,” Kohut said. “I always preach that they’ve got to think positive and pump each other up, and they did. They have drive and a never-give-up attitude. We’re 7-0 (districts and states combined) and we’ve come back in how many of those games? It ain’t over till it’s over.”

Berlin was scheduled to play MoCo LoCo, yesterday, Thursday, for the state championship.

“We practice all the time and they put in the work and it’s carrying them through these games. They’re just really having fun and it’s showing,” Kohut said. “It’s been such a ride. I’m trying to stop and savor the moment.”

Berlin will host the Junior League state championship tournament beginning this Saturday at its complex off Route 113.

Berlin won the District 8 championship to advance to the state competition.

The squad received a first-round bye. The team hosted West Salisbury on July 14, and won, 18-3 in five innings (10-run rule).

“I was pleased with their composure and their attitude,” Gaylor said. “They’re like my kids. I’ve coached these kids since they were 7 years old. I’ve told them there’s two things they can control: attitude and hustle.”

Berlin took down Delmar in four innings. Berzonski and Edelmann combined for nine strikeouts in the no-hitter.

The team had 13 hits, with big games offensively from Jackson Cheung, Spencer Gaylor, Cameron Boston, Loring, Edelmann and Berzonski, who each had multiple RBIs, the coach said.

“They were excited to win on my birthday. That was the present they gave me,” Gaylor said. “Before the game they told me, ‘We’re going to win this for you.’”

The victory earned the team the District 8 title.

“I’m glad for the kids that they won the district title,” Gaylor said.

The 13-player team consists of four 14-year-olds and nine 13-year-olds.

“We had the youngest team in the district (tournament) and during the regular season,” Gaylor said.

Most of the boys played together during the regular season, when they went 12-0. A few players were added to the roster for the all-star competition.

All of the Berlin Little League organization is excited to host the state tournament.

“It’s a big deal for Berlin and a big honor to host a tournament like this,” said Gaylor, who has been a Berlin Little League coach and organization board member for seven years. “We have a beautiful field [complex] and I like to show it off.”

Berlin will play the winner of the 10 a.m. District 4 Talbot County and District 6 Laurel game at 7 p.m. on Saturday.

If Berlin wins, the team won’t play again until Tuesday. If the squad loses, it will compete on Sunday and have to battle back in the double-elimination tournament to earn a spot in the championship game.

“The goal is definitely to win, but we know it will be difficult because we have a young team. There’s a big difference between a 13- and 14-year-old,” Gaylor said. “I know we’re the underdogs, but we feed off that.”

To be successful, Gaylor said the boys need to stay focused, and “do what I’ve been telling them since they were 7 – keep a good attitude and always hustle,” Gaylor said.

Gaylor encourages everyone in the community to come out and cheer on the Berlin team this Saturday.

Before competing last Thursday in Thurmont, Maryland, Berlin Intermediate All-Star Team Manager Mike Moseley said he was just excited to advance to the final two in the state tournament.

Berlin was going up against the undefeated District 1 Maugansville team and would have to win twice in the double-elimination tournament to bring home a state title.

Too many mistakes proved to be costly for the Berlin squad, and Maugansville came out on top, 14-0.

“I knew it was going to be tough,” Moseley said. “They were nervous. I kept telling them to settle down.”

All in all, Moseley said it was a good experience for the boys.

“No one expected us to get where we were,” he said. “We lost the first game and battled back to get to the championship. That’s a big achievement.”

Berlin kicked off the tournament on July 10 against District 5 Rising Sun. Berlin gained an early 4-1 lead, but Rising Sun took advantage of some mistakes and came from behind to win, 21-8.

The local team bounced back the next day to top the District 2 Montgomery County team, 19-11.

Berlin had a rematch with Rising Sun last Wednesday, and this time, the squad came out on the winning end, 13-2. The victory set up the contest with Maugansville.

“It was a great season. For us to lose the first game and battle back with the players we have – we have nine 13-year-olds and three 12-year-olds, I really thought the kids did excellent,” the coach said. “To fight back and play for a championship is a big accomplishment.”

The 10-11-year-old team also had a successful all-star season.

Berlin scored a 7-2 victory on July 10 over District 1 West End Little League of Hagerstown in Salisbury. The Berlin squad fell to the District 2 Brunswick team, 11-1, on July 12.

Berlin battled Brunswick for the state championship the next day. Berlin only trailed 9-8 in the fifth inning, but Brunswick added 11 runs to win.

The Berlin squad advanced to the state tournament by winning a three-game series over Fruitland Little League, to capture the District 8 title. Berlin took the first game, 8-7, in Fruitland and won the second, 7-5, on its home field in Berlin on July 5.

“I thought the season went great. It was very competitive and I thought they handled it well,” said Manager Ron Calloway. “It was a lot of fun and bottom line, that’s what it’s all about.”

Before the season began, the group of 11 11-year-old players and coaches got together and set a goal to win the state championship. Despite coming up a bit short, Calloway was pleased with his players’ performance and the way they came together in a short period of time.

“The kids came close. I thought they accomplished a lot,” he said. “They have nothing to hang their heads about. For most of them it was their first experience playing in a state tournament. It was a great experience.”

Calloway said he appreciates the community and parents’ supports and the dedication of his assistant coaches, Rob Smith and Ray Clymire.

Some clouds this evening will give way to mainly clear skies overnight. Low 59F. Winds NW at 5 to 10 mph.

Some clouds this evening will give way to mainly clear skies overnight. Low 59F. Winds NW at 5 to 10 mph.