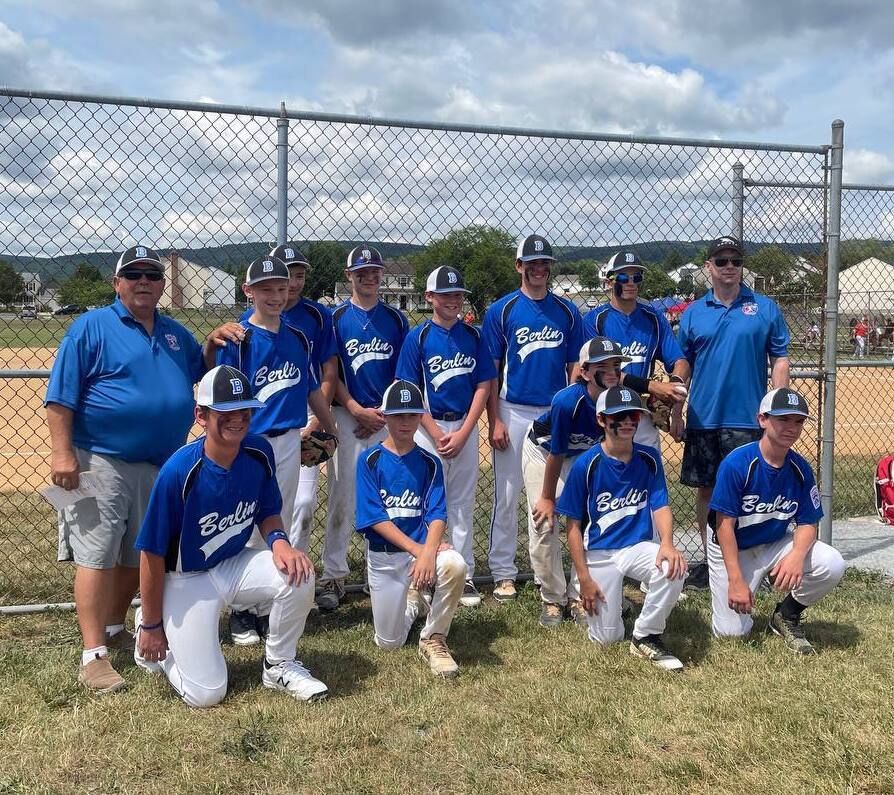 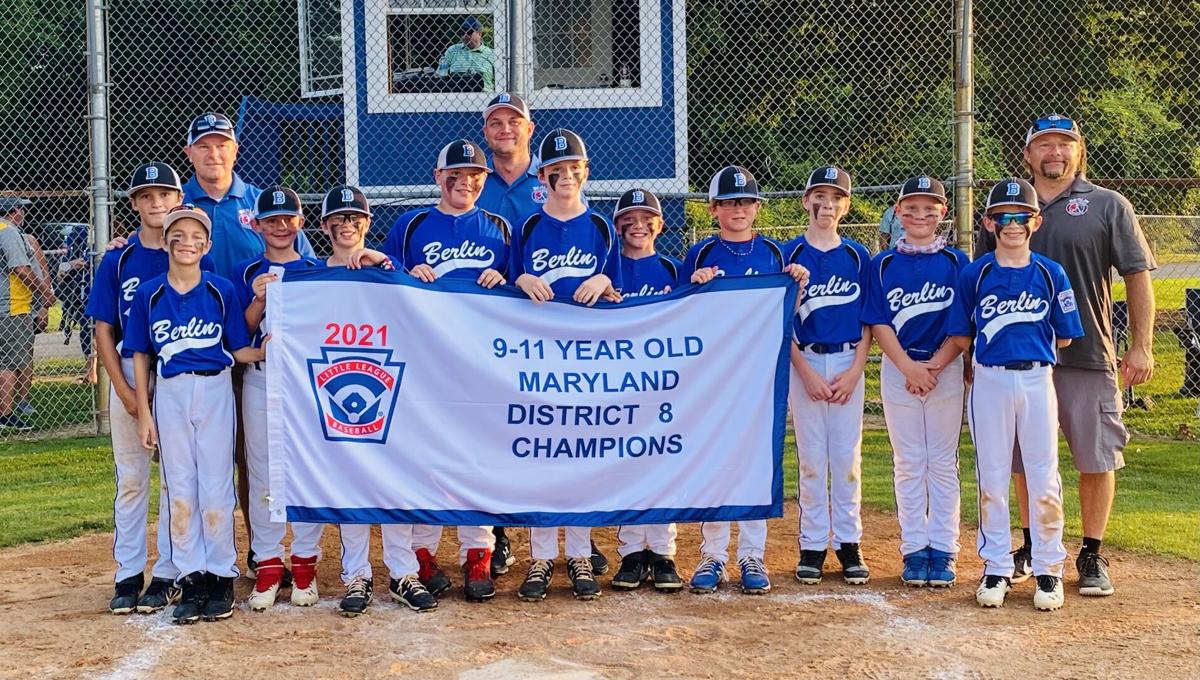 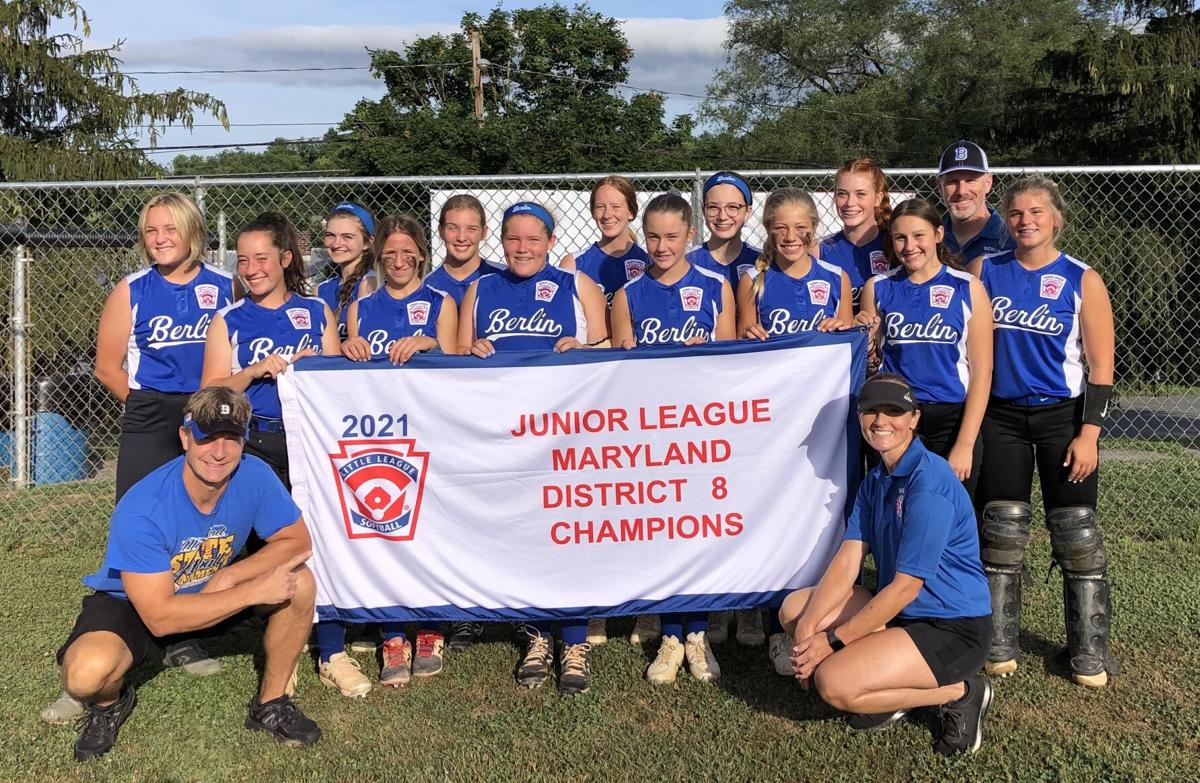 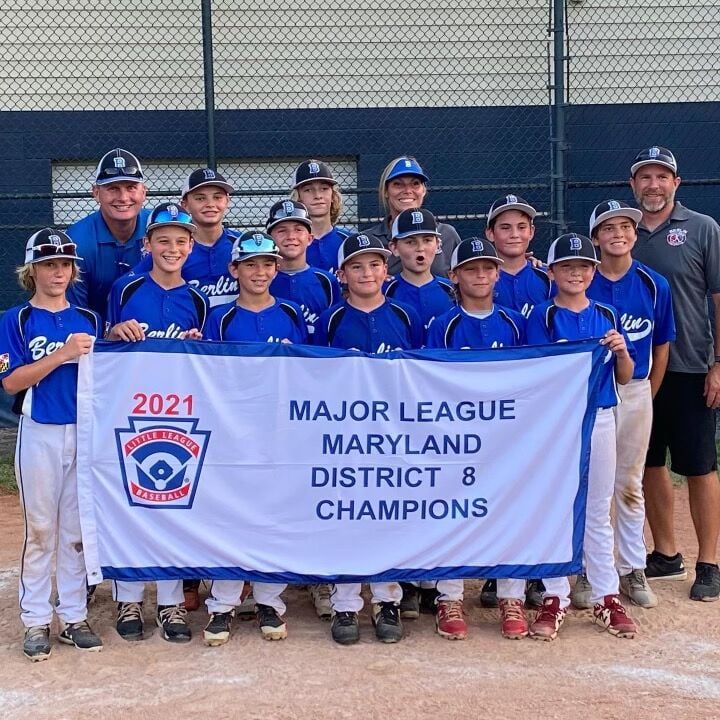 The Berlin Major League All-Star team won 5-4 over Delmar in extra innings to capture the District 8 title on Sunday.

The Berlin Major League All-Star team won 5-4 over Delmar in extra innings to capture the District 8 title on Sunday.

The District 8 Berlin Intermediate All-Star squad kicked off its title run on Saturday in Thurmont, Maryland, against Rising Sun.

Berlin gained an early 4-1 lead, but Rising Sun of District 5 took advantage of some mistakes and came from behind to win, 21-8.

Berlin bounced back the next day, topping the District 2 Montgomery County team, 19-11.

While Manager Mike Moseley said everyone contributed in Monday’s victory, Seamus Orth, was a “big help,” hitting two home runs with runners on first and third.

“We were down 4-1 in the second. We [then] had a rain delay and after that, our bats woke up,” Moseley said. “My pitcher, Ryder Bodis, shut them down. It was a really good game.”

During the game, Gage Pettit had a two-run, in-the-park home run, scoring Kenny Moseley from second.

“We’re playing really well so far. We have a really good team,” Moseley said. There are 12 players on the team, ages 12 and 13.

The Berlin team faced Rising Sun again on Wednesday evening and this time came away with a victory.

“We smoked them today,” Moseley said after the 13-2 win. “The infield played well and the outfield never missed a ball. Seamus was on fire. He threw 93 pitches and then Tim McCormick finished it for us in 21 pitches.”

Moseley said the difference between the first game and the second against Rising Sun was that the boys are now more comfortable playing with each other.

“The first game was our first time playing together, and there could have been some nerves,” he said.

The Berlin team was scheduled to play the undefeated District 1 Maugansville team, yesterday. Berlin, who has one loss in the double-elimination tournament, will have to beat its opponent twice to win the state championship. If Berlin won Thursday, the two teams will again meet today, Friday.

“I’m excited we made it this far,” Moseley said.

The 10-11-year-old squad earned a 7-2 victory on Saturday over District 1 West End Little League of Hagerstown in Salisbury.

The Berlin squad fell to the District 2 Brunswick team, 11-1, on Monday.

“We lost because we made mistakes early and they took advantage of that. They are a team you can’t make mistakes against,” Calloway said. “It was our first loss as a team. We just have to pick up the pieces and learn from our mistakes.”

“They played great. Defense was excellent and we hit the ball well,” Calloway said. “We were down by one going into the second inning and the boys started a rally of eight runs over four innings. West End made a late rally in the bottom of the sixth but we were able to hold them off.”

Berlin went head-to-head with Brunswick for the state championship on Wednesday. Berlin only trailed 9-8 in the fifth, but Brunswick added 11 runs to win.

The Berlin squad advanced to the state tournament by winning a three-game series over Fruitland Little League, to capture the District 8 title. Berlin won the first game, 8-7, in Fruitland and the second, 7-5, on its home field in Berlin on July 5.

The team consists of 11, 11-year-old players. Calloway is assisted by Rob Smith and Ray Clymire.

“I’m proud of the boys, the way they’ve come together over the summer,” Calloway said. “We’ve been practicing three to four days a week since the beginning of June. They’ve put in a lot of work. I also want to thank the parents for their help and support.”

The Junior League Softball All-Star team is 3-0 in the state tournament in Hancock, Maryland.

“They’re playing very well. We’re hitting the ball well and we have some aggressive base running,” said Manager Katie Griffin. “This is a special group of girls. A core group of them have been playing together since they were 6, 7, 8 years old.”

“The girls played awesome. We hit the ball really well. We had two home runs” Griffin said. “Everybody contributed.

Emily Blume and Ryleigh Smith both hit home runs in the game.

The girls will face either Harve de Grace or Hagerstown, who will go head-to-head today, Friday, on Saturday morning at 9 a.m. for the state championship.

“It’s really exciting. We won it two years ago,” Griffin said. “It’s a good group of girls. I’ve coached them for a few years now and they’re such fun to be around.”

While the softball and intermediate squads didn’t have district tournaments, because of lack of participation, the Berlin Major League All-Star team joins the 10-11-year-old squad as champions.

The major leaguers scored district wins over Fruitland, 10-3, Snow Hill, 13-0, and then West Salisbury, 12-2, in the semifinals.

Berlin faced Delmar on the road on Sunday, and pulled out a 5-4 victory in extra innings.

“It was a battle. It was a crazy, nail-biter game,” Kohut said.

Berlin won the coin toss, and took the option to be the home team.

Delmar scored two in the third and one in the fourth to take a 3-0 lead. Berlin got on the board with one run in the bottom of the fourth.

Delmar made it 4-1 in the top of the fifth, but Berlin answered with one run in the bottom of the inning and two in the sixth, to tie it, 4-4.

“They kept plugging away, and little by little they came back,” Kohut said. “We had the bases loaded two times and we just couldn’t get a run in, but the kids never gave up. I was confident they had what it takes ... they just had to execute.”

In the bottom of the seventh, Bryce Huyett had a “textbook bunt,” Kohut said. Tanner Edelmann – who was 4-for-4 on the day – scored on an error, when the Delmar third baseman couldn’t handle the catcher’s throw.

Multiple kids played in games with their travel teams earlier in the day, Kohut said, but they couldn’t miss competing in the District 8 championship.

“They know Berlin bleeds blue and the game was a big deal,” Kohut said. “They hadn’t been tested before. I was proud of them for coming from behind. They coped and dealt with it. It was impressive to watch. They wanted it. It was a true team effort. It was great to see.”

The team – made up of 12 11- and 12-year-olds – will kick off its double-elimination state competition on Saturday in Davidsonville. The Berlin squad will take on the District 6 champs, South Caroline (Preston), at 5:30 p.m.

The squad’s next game will be at 2:30 on Sunday. Opponent yet to be determined.

“The boys just need to keep doing what they’re doing and believe in themselves,” Kohut said. “They have all the tools, they just need to put it together and execute. They’ve played classy and clean, and have had fun doing it.”