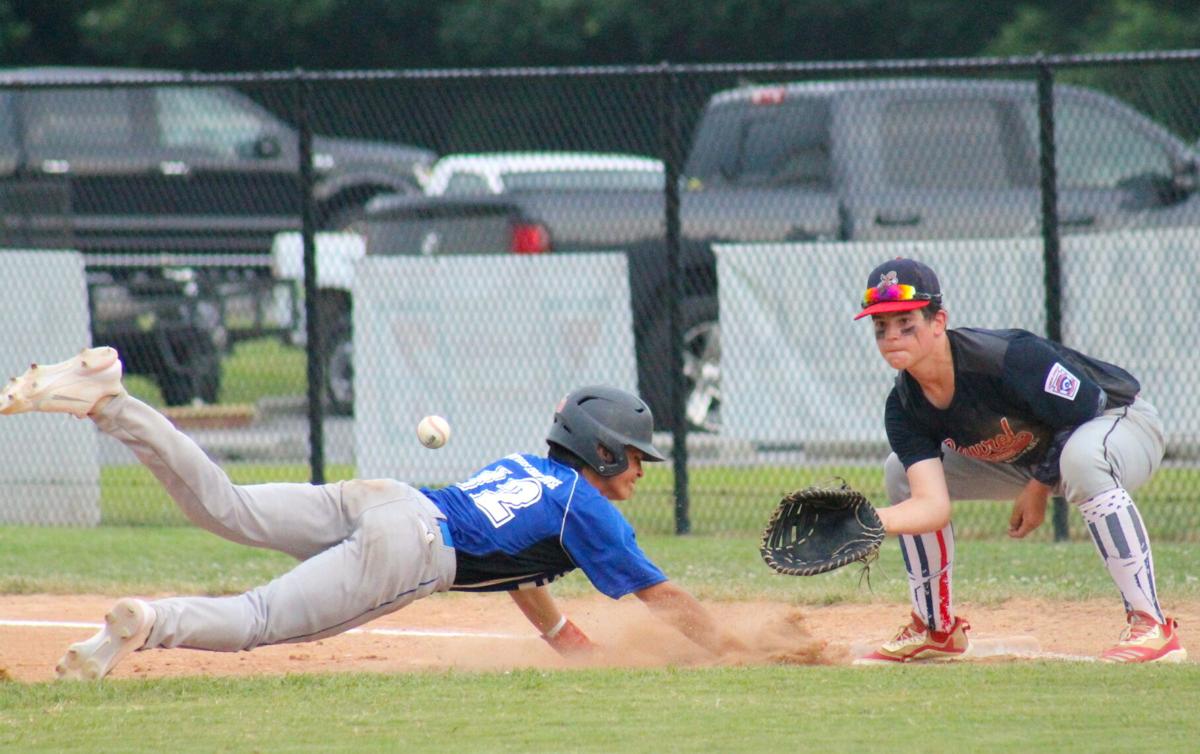 Jackson Cheung dives back to first base during the Berlin Little League Junior League All-Star team’s state tournament game against Laurel Little League on Monday in Berlin. After three half-hour delays due to lightning, Berlin won 13-2. 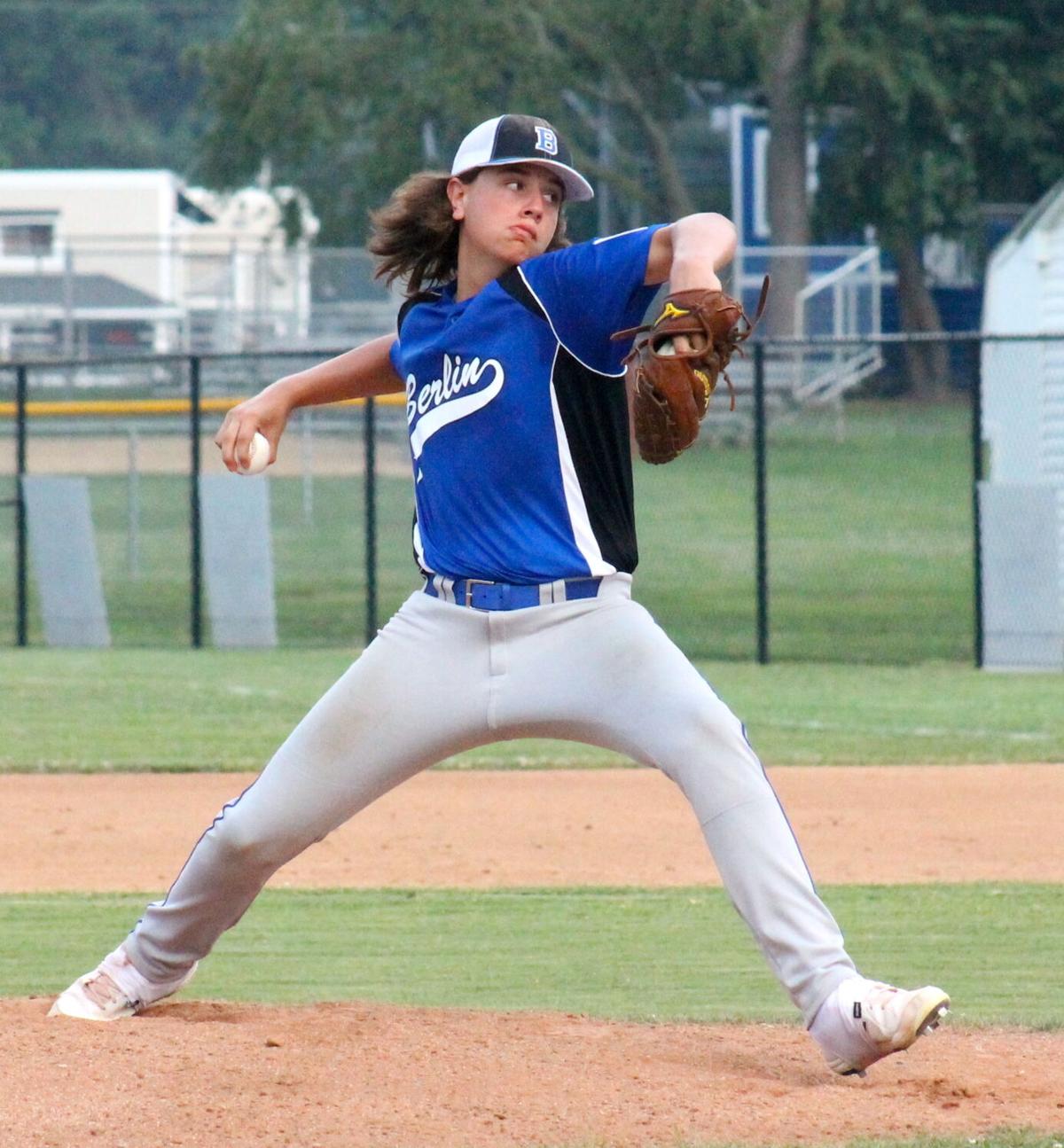 Nate Berzonski starts on the mound for the Berlin Little League Junior League All-Star team during its state tournament game against Laurel Little League on Monday in Berlin.

Jackson Cheung dives back to first base during the Berlin Little League Junior League All-Star team’s state tournament game against Laurel Little League on Monday in Berlin. After three half-hour delays due to lightning, Berlin won 13-2.

Nate Berzonski starts on the mound for the Berlin Little League Junior League All-Star team during its state tournament game against Laurel Little League on Monday in Berlin.

(July 30, 2021) With a 3-1 record, Berlin’s Little League Junior League All-Star team was still in contention for a state title as of Thursday morning.

Berlin, the District 8 champions, is hosting the state tournament this year. The local squad opened double-elimination tournament competition on Saturday against Talbot Little League of District 6.

Berlin scored one in the first, but Talbot answered with five in the second. Berlin plated six in the bottom of the second to pull ahead, 7-5. The team added another run in the fourth to take an 8-5 lead.

Talbot scored two in the fifth, three in the sixth and two in the seventh to gain a 12-8 advantage.

Berlin made it 12-9 in the bottom of the seventh, but was unable to regain the lead.

“It was a great game. Back and forth,” said Manager Mike Gaylor. “Ethan Cowder, our left-handed pitcher, pitched phenomenal. We had them rattled all night. It was just one of those games; timely hits on their part, and we couldn’t score.”

Berlin battled back with a vengeance the next day, trouncing District 5 representative, Rising Sun, 20-1, in four innings.

Berlin scored six in the first, nine in the second and five in the third to take a 20-0 lead. Rising Sun knocked in its lone run in the fourth.

“We had a meeting before the game and I told them, ‘I’m not done. Let’s show everybody what we can do,’” Gaylor said. “The boys fed off that.”

Tony Martin only allowed two hits in the game and struck out four.

“He threw 40 pitches in four innings,” Gaylor said. “We hit really well. The whole team, from top to bottom, everyone hit.”

Berlin’s game on Monday against Laurel of District 4, was a marathon, with the first inning lasting about 45 minutes.

Laurel put two runs on the board in the top of the inning. Berlin answered with three in the bottom of the first.

“We were a little flat at the beginning,” Gaylor said. “I told them, ‘The game is important. You play until you lose.’ That woke them up and they put it together.”

Berlin tacked on five in the second to pull ahead, 8-2.

The game, which started at 6 p.m., was then stopped three times for lightning. Each stoppage was 30 minutes, so when the game was finally over – with Berlin coming out on top, 13-2 – it was about 10:30 p.m., Gaylor said.

The contest ended in the fifth inning, because Berlin had a 10-plus-run lead.

Nate Berzonski, Cheung and Edelmann combined to hold their opponents in check, allowing no hits. They had two, three and two strikeouts, respectively.

Berlin had Tuesday off and played District 7 St. Mary’s on Wednesday, and won 12-4.

St. Mary’s scored one in the first, then Berlin drove in four in the second and two in the third to take a 6-1 lead.

St. Mary’s added three in the bottom of the inning.

Berlin tacked on one run in the fourth, fifth and sixth innings and three in the seventh.

“We played rock solid,” Gaylor said. “They played with heart and grit.

Berzonski had two hits, and Edelmann chipped in with two hits and three RBIs.

The team was slated to battle Talbot yesterday, Thursday, for the state title.

Berlin advanced to the state tournament by winning the District 8 championship. The squad received a first-round bye, then hosted West Salisbury on July 14. Berlin earned a 18-3 victory in five innings (10-run rule). On July 16, Berlin outscored Delmar, 19-1, in four innings on the road to claim the title.

MoCo LoCo won 6-0. Since Berlin hadn’t lost a game in the double-elimination state tournament, the two teams met again on Friday. MoCo LoCo came out on top, 11-3, to win the state title.

“In the first game, they got a quick lead, and we just didn’t hit,” said Manager Barb Kohut. “On Friday, MoCo LoCo came out and tore it up. They just hit better than us. They just fielded better than us. We made more errors in that game (four) then we had all season. We had some opportunities, but it was too late and the lead was too large to overcome.”

Despite the two losses, the Berlin squad has a successful all-star season.

“It was a spectacular season,” Kohut said. “They fought hard, they played hard and we won a lot of games. It was not an easy road. We won a lot of hard games. The kids worked hard and it showed on the field.”

The team finished with a 7-2 record.

“Second in the state is nothing to hang their heads about,” she said. “As much as I wanted to be in Bristol [Connecticut, for the regional tournament], second is a pretty big accomplishment.”

During state competition, Berlin shut out District 6 champs, South Caroline (Preston), 10-0, then edged out MoCo LoCo, 2-1. The team then outscored District 1 Conococheague, 5-4, to set up the championship match-up with MoCo LoCo.

The Berlin team advanced to the state tournament after winning the District 8 title. During district competition, Berlin earned wins over Fruitland, 10-3, Snow Hill, 13-0, and West Salisbury, 12-2. Berlin pulled out a 5-4 victory in extra innings to clench the district title.

“We have a lot of 11-year-olds on the team and they’ll get a second chance at the Little League World Series next year,” Kohut said. “There’s more in their future, and the future looks bright … Berlin will still be solid, no matter what level.”