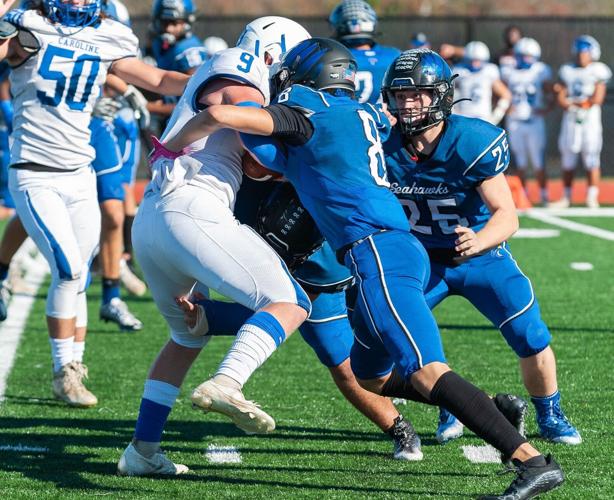 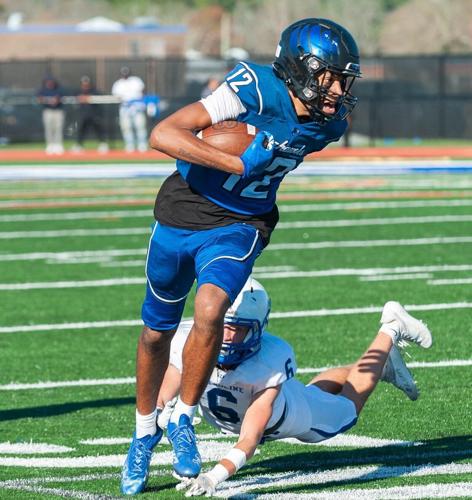 (Nov. 18, 2022) When the Stephen Decatur football team hosted the North Caroline Bulldogs on Oct. 7 – the Seahawks’ homecoming night – they came from behind to win the battle, 16-14.

When the two teams met again in Berlin last Saturday in the MPSSAA 2A East Region second round, Decatur dominated – even in the unseasonably warm weather and with the flu bug going around the team – coming out on top, 43-27.

“Most guys were sick all week. Quite a few lost body weight and it was hot, so it was a challenge,” Decatur Coach Jake Coleman said. “They fought through it and battled. Sometime you have to go to work when you don’t feel well. North Caroline gave us everything. I was pleased with the guys and how they fought.”

Decatur, the No. 3 seed, got on the board first with a touchdown by junior quarterback Brycen Coleman. Junior Brogan Eastlack’s kick was good.

The seventh-seeded Bulldogs made it 7-6 with one minute left in the quarter.

Senior Luke Mergott and sophomore Trybe Wise scored in the second quarter and Eastlack was successful on his extra-point attempts to boost Decatur’s advantage to 21-6 at halftime.

North Caroline scored early in the third quarter, but Decatur answered with touchdowns by Mergott and Wise.

The visiting Bulldogs scored with about three minutes left in the third quarter.

Coleman ran into the end zone with just over a minute to play, then Mergott was successful on the two-point conversion. After three quarters, Decatur led 43-19.

North Caroline made it 43-27 with just under nine minutes remaining in the game, but the Decatur defense held off any more charges.

“The big difference between the two games is both sides made adjustments from game to game. When you play a team twice you’re going to see different things,” Coleman said. “Offense did a great job, special teams was key in this game – it was a huge advantage for us – and defense only gave up 21 yards rushing in the first half. We just have to make sure we finish. We can’t let a team back in.”

Eastlack was 5-for-5 on extra points.

“It was huge win. It puts us one more round deeper,” Coleman said. “I’m proud of the kids. It’s amazing to be sitting here 9-2. They’ve really done a phenomenal job.”

The remaining eight 2A teams were reseeded for the state quarterfinal round.

Fifth-seeded Decatur will take a trip to Oxon Hill in Prince George’s County on Friday to face the No. 4 Potomac Wolverines at 6:30 p.m.

“Making it to the third round two years in a row is a big accomplishment. The next goal is this game,” Coleman said. “We don’t want this ride to end … They only have one loss on the season and they’ve only given up 33 points in 11 games. We have to give our best effort, we have to bring our ‘A’ game and we’ve got to play to win. We have to come out and do all the little things well – catch the ball better, win one-on-ones, tackle in open space, have another great effort by special teams, offense has to get it going and defense has to be lights out.”

Fans planning on attending the game should purchase tickets online at https://gofan.co/app/events/790744?schoolId=MD24822&amp;fbclid=IwAR0MqxkKNEg6jxl6IMNdMPazZGUNqfW5plII-nj5SVD3s4QvAz_P3Qiste8.