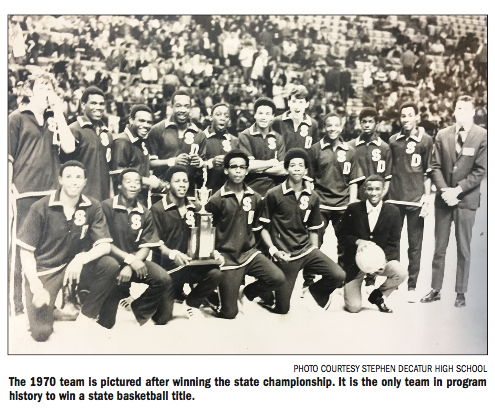 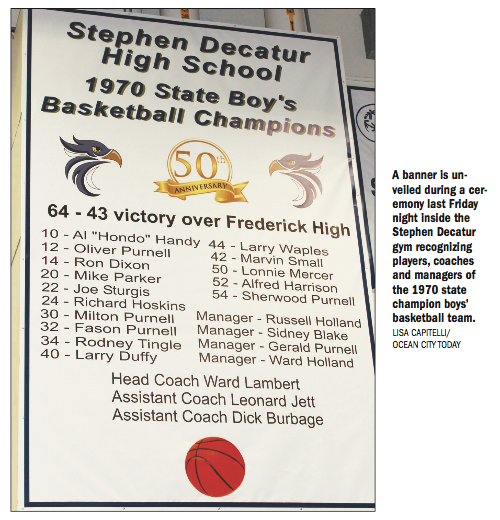 Nearly two dozen men, traveling from as close as Berlin to as far away as California, attended the event to celebrate the 50th anniversary of their big win.

“They’ve come from all around to be here tonight,” Lou Taylor, superintendent of Worcester County Public Schools and former Stephen Decatur High School principal, said. “To talk to them, to see the pride they still have in this high school is just awesome. It’s just so special.”

The 1970 squad is the only basketball team in the program’s history to capture a state championship.

“Ten years old, I remember standing in line for hours with my father and mother trying to get into the gym so we could see the games. If you wanted to get in to see this team play back in 1970 you had to be in line between 3 and 4 o’clock or you wouldn’t get in,” Taylor said. “They sold out every night and they were just unbelievable athletes, but more importantly, they’ve all become great men.”

Players, coaches and team managers gathered in the school’s cafeteria first, where they enjoyed some food and had a chance to catch up.

While some see each other on a regular or semi-regular basis, others haven’t been together since high school.

“Just think about it, we had not been all together as whole in 50 years,” said former player, Al “Hondo” Handy, of Berlin, who recently retired from the Ocean City Recreation and Parks Department after nearly 40 years. “It was exciting for me, especially learning that the guys were really interested in coming back. Hopefully, it was exciting for the community.

“There’s a lot of people that talk about our team, but after awhile, they didn’t know who we were,” he continued. “At least now, they know who we are [and can put faces to names]. I think the crowd learned a lot.”

Handy said being a member of the team was an honor. He was a junior when the team captured the title. The team went 20-1 that year, only losing to Washington High School, he said.

“Back then, it was a sense of pride to be on the basketball team,” he said. “Coach Ward Lambert made us feel like we represented the school, and he’s probably the greatest coach we ever had. I can probably say that for all 22 of us.”

Toward the end of the Decatur JV boys’ basketball game, the group was led into the gym, where they were seated in a special section behind one of the baskets.

Decatur Principal Tom Sites kicked off the ceremony during halftime of the varsity team’s game against Pocomoke. Taylor then told the crowd a little bit about each player, coach and manager.

“This is one of the nicest events that I’ve been associated with at Stephen Decatur High School. The reason for that is because as a 10-year-old kid living and growing up in this area, this team, this special team at Stephen Decatur, brought our community together,” Taylor said. “It was a time of integration … and when they all got together and played on this basketball team everybody just rallied around them and our community rallied around each other. To see them come back really kind of gives me goosebumps, because it’s history. It really is.”

The special guests received a shirt and plaque with a photo of their 1970 team on it. Family members of some of the players who have died where on hand to represented their loved ones.

After each was recognized, a large banner was unveiled in the gym that has all of their names on it.

“I’m just proud of everybody that played. Everybody that came tonight, our team was together when we won the state championship and we’re here together again,” Handy said.

“It’s really great. I guess you can say time’s been good to us,” said former player, Sherwood Purnell. “It doesn’t seem like 50 years. I’m able to appreciate what we did looking back, and it’s just great to see these guys.”

Purnell, who lives in Wilmington, Delaware, said he remembers the team as a close-knit group.

“We had been through elementary school to high school here and we all had each other’s back,” he said. “We lost the year before and going back to win it the next year was really great. I’ll never forget the people were here waiting at the school to meet us when the bus got back [to celebrate the victory].”

Decatur went to the state championship in 1969, 1970 and 1971. Purnell was a senior when the team won the championship. The squad edged out Frederick High School, 64-63.

“The one thing I’d say about our team, all of the guys when they graduated the next year they went to college,” he said. “Not everybody completed it, but we all headed that direction.”

“When you see these guys, it’s just a remarkable feeling. It just kind of brings you back,” he said. “I just can’t believe it was 50 years ago. It feels more like 20. This is just wonderful.”

Purnell, who lives in Delray, Florida, retired about five years ago from coaching. He was a head basketball coach for 28 years. He has been coaching – either as an assistant or head coach –  for about 40 years, leading teams at Clemson University, Dayton, Old Dominion, Radford, University of Maryland, and most recently, DePaul in Chicago.

Some of his family still lives in Berlin and he said he visits from time to time.

“This is just a humbling, wonderful feeling. It gives you a feeling of accomplishment that we did something that’s never been done, but also for this generation and this group of administrators and teachers and coaches and players to think it’s important is pretty wonderful,” he said.

“It made me believe, just like our coach had been saying, that if you’re together and working extremely hard you can accomplish anything. It’s a wonderful time that can’t be duplicated. It’s something I’ll remember forever,” he said. “We grew up together and we were so much like a family. Most of us had know each other for 10 years before that ever happened, playing together on the playground and on dirt courts.

“One thing that sticks out to me is that we lost the state tournament my sophomore year and we got mugs that said victory is always sweeter when you taste defeat, and that’s so true,” he continued. “That’s a huge lesson in life implanted right there. Anytime you struggle to do something and you finally accomplish it, it’s far more gratifying.”

Head Coach Ward Lambert was also in attendance. He was shocked and pleasantly surprised to see so many of his former players, managers and coaching staff attend the event.

“I can’t believe all the people that came back. It’s super,” he said. “I would never dream it would be anything like this. I thought it would be a few people.”

Lambert coached at Decatur for five years. His last was 1970, when the team won the title.

“Because of them I got a job coaching in college, he said laughing.

He went on to coach at Salisbury University for 30 years, retiring in 2000. He now lives in Bel Air, Maryland.

“I coached 38 years and of all the teams I coached, this team has more desire and drive and that’s why they won it,” he said. “Those kids, they pulled down deep. It looked like we were out of it but they pulled it out [and won the championship.]”