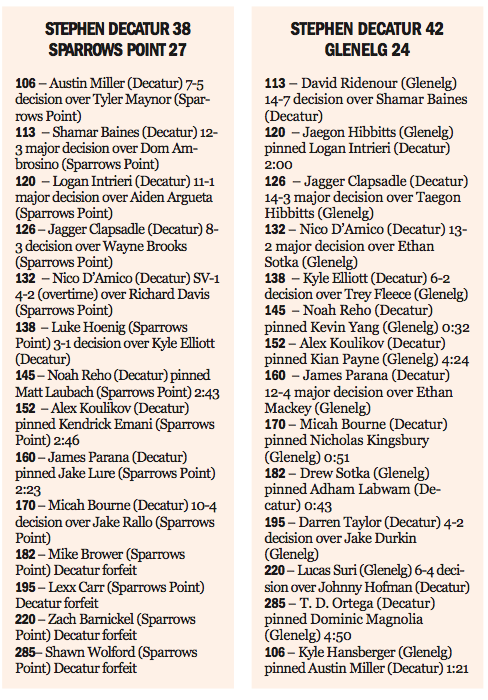 The undefeated Decatur squad was seeded No. 1. The team faced fourth-seeded Sparrows Point in the semifinal round.

The Seahawks went up 38-3 so Martinek decided to forfeit the last four matches to rest his wresters for the finals.

“It was a great win. They were all close matches,” Martinek said.

Decatur had about two hours between the semifinals and final round so the boys left the gym, got something to eat and just relaxed to clear their heads and not think about wrestling, Martinek said.

Third-seeded Glenelg topped second-seeded LaPlata, 36-30, to advance to the finals against Decatur.

Martinek said he felt confident going into the finals match. He told his wrestlers to “just do your job and just wrestle your best match.”

“Everybody did their job,” he said. “It was our closest dual meet all year. Glenelg did a good job of not getting pinned.”

Martinek said his team is strongest from the 132- to 170-pound weight classes and opponents have a difficult time against his grapplers in those spots.

“There are some good wrestlers, but our wrestlers are extremely good and they score a lot of bonus points,” he said.

Martinek said it was exciting for the team to win the 3A state dual title last year, but this year it was more of a relief to bring home the 2A championship.

In the past 50 years, Stephen Decatur sports teams have won six state championships. The wrestling team now holds three of those titles.

The first wrestling championship was earned in 2008. The second was achieved last year.

The unbeaten Decatur squad will now compete in the Bayside Conference championship meet, today and Saturday, in Cambridge.

To prepare for the competition, Martinek said on Monday that the Seahawks would be working on addressing their weaknesses and fine-tuning this week.

The Berlin squad bulldozed through its conference competition this season and Martinek is confident the Seahawks can bring home another title.

To challenge his wrestlers and keep them motivated, Martinek set a goal to win the tournament by 100 points this year. Another goal is for all 14 wrestlers to finish in the top six in their weight classes. Martinek hopes to have nine or 10 in the final of their divisions.

The top four in each weight class will advance to next weekend’s regional tournament. Martinek said the goal is to have 12 Decatur wrestlers qualify for regionals.