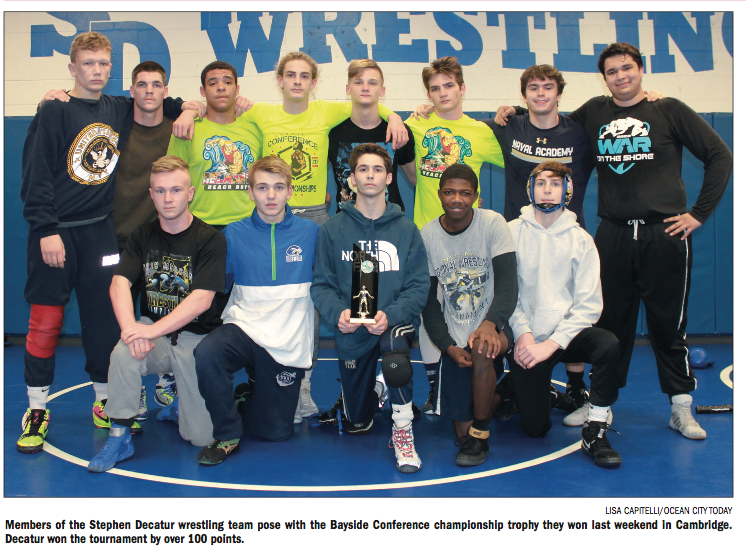 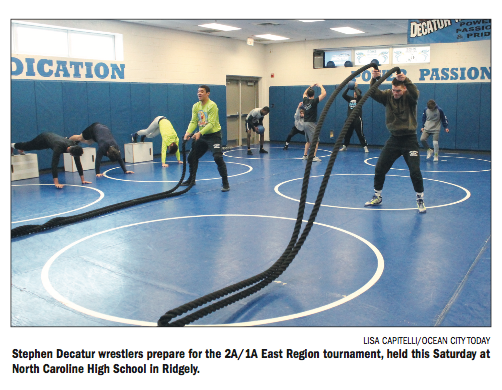 (Feb. 28 2020) The Stephen Decatur wrestling team dominated its Bayside opponents all season, and the Seahawks’ performance during last weekend’s conference championship tournament was no different.

“I was real happy with it. We set a team goal of winning by 100 points and we did that. We set a goal of trying to have more than nine finalists and we had 10,” Decatur Coach Todd Martinek said. “I thought we were aggressive. Sometimes you can wrestle down to your competition, but we didn’t do that. We made some mistakes, which was fine. When you wrestle that many matches you’re going to see some mistakes. Monday we spent time fixing those mistakes.”

A Decatur wrestler placed top-three in 12 of the 14 weigh classes to advance to the 2A/1A East Regional tournament, held this Saturday at North Caroline High School in Ridgely. Five wrestlers won their Bayside divisions.

Baines pinned his first opponent, then won his second match, 5-4. He pinned his opponent in the finals.

“I think I did well in the finals and my first match,” Baines said. “I just don’t like how I wrestled my second match. It wasn’t the best match. I won by a point, but I should have won by more.”

He earned the No. 1 seed for regionals. Baines’ goal is to win his division, but said he will also be happy to just qualify for states.

To accomplish his goal, Baines (28-6) said he needs to “be prepared mentally and physically and go there and wrestle smart.”

D’Amico received a first-round bye. He pinned his first opponent, then won by tech fall (16-0) in the next round. He outscored his opponent in the finals, 12-5.

“I think I wrestled pretty good,” he said. “I was on my offense a lot and I’m feeling really good on the mat.”

“I’m feeling pretty good going into it, and healthy. I’ve been looking forward to this,” he said. “I won Baysides, now I want to win regionals and then states. I need to stay on my offense, keep my head right and stay healthy.”

Reho was awarded a first-round bye. He then pinned his next three opponents.

“I feel like it was a turning point for me this season,” Reho said. “This year I don’t feel like I’ve wrested to my capability, but this weekend I feel like I destroyed everyone and wrestled the best I could. I’ve won a lot more matches than I’ve lost this season, but at the same time, I just didn’t feel like I wrestled my best until that point.”

Reho (31-3) said he is excited for the regional tournament. He is seeded first in his division.

“I get to prove myself, see where I am and work from there,” he said.

His goal is to pin all of his opponents like he did at Baysides.

“Whenever I’m on my shots, whenever I work from my offense, I always wrestle aggressive and I always win,” he said. “That’s just what I want to go for.”

He was awarded a first-round bye. He pinned his first two opponents then won his final match, 11-2.

“I’m pretty happy,” he said. “I was out all last year and this year I’ve been just doing pretty good.”

He is happy to be back on the mat and said he is both nervous and excited for regionals.

With a 34-2 record, Koulikov said his goal is to win his weight class.

It will take “practicing hard, keeping my weight under control and try to just treat every match the same.”

“It will be tough competition,” he added.

Junior James Parana is a two-time champion at 160 pounds.

He had a first-round bye, then pinned his three opponents.

“I felt like I did well,” he said. “My goal was to just take it to everyone I wrestled and get in there and get it done and I feel like I did that.”

“My goal is to do the same thing as I did in Baysides and make my way to states,” Parana said. “I definitely need to look at what I did wrong over the past weekend, improve where I can and just keep pushing the pace, working hard and doing my best.”

Those 12 wrestlers are headed to regionals along with their teammate, senior DJ Taylor.

Taylor finished in fifth place in the 182-pound weight class at Baysides, but he accumulated enough points during the season to advance to regionals.

“Thirteen out of 14 [going to regionals], that’s great … I think six champs is legitimate,” Martinek said. “The school record is 10 to qualify for states and our goal is to beat that. I think certainly we can get 11 or more, which would be a big accomplishment … I’m looking forward to seeing how many guys we can get on the podium at states, but they got to perform this weekend [at regionals] or they’re not going to get there.”

The top four finishers at regionals will advance to next weekend’s state championship.

In addition, freshmen Jenna Danner (112) and Mia Stubblebine (180) will join their teammates, participating in the inaugural girls’ regional tournament.