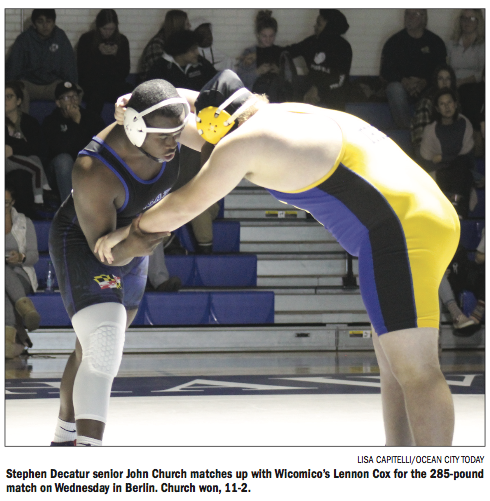 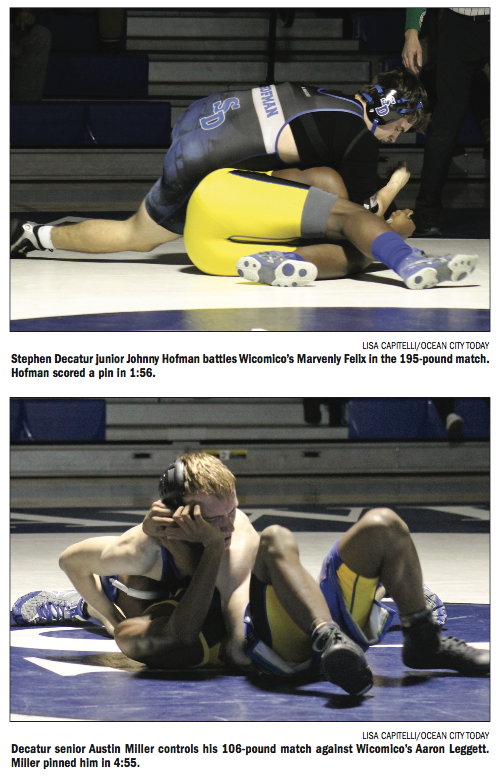 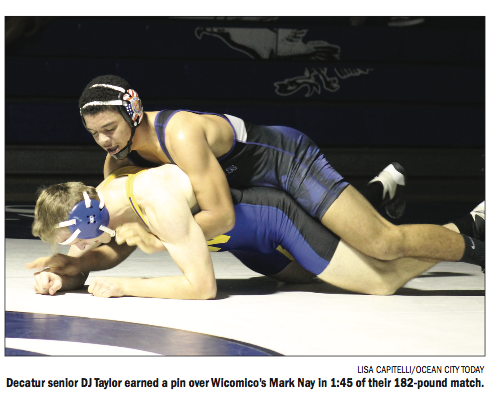 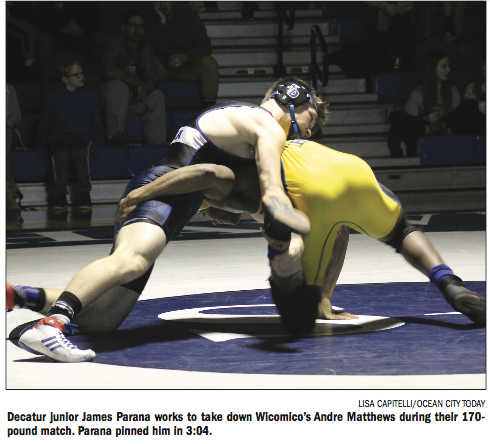 Prior to the tournament, Decatur Coach Todd Martinek said the team had participated in event for about seven years, but never won it. The goal this year was to finish in first place, and that’s just what the Seahawks did.

“I was ecstatic with the weekend. To come out winning the tournament, and coming out healthy, you can’t ask for more than that,” he said. “And we were impressive. We really didn’t have a close dual meet.”

The 15 teams were divided into two groups. Decatur was in Group B. The Seahawks earned victories against all their opponents.

The Berlin squad then battled the first-place team in Group A - South Carroll. Decatur came out on top, 57-23, to win the tournament.

“People kept telling me we were dominant. I felt like we wrestled well,” Martinek said. “Looking back on it, I guess we were dominant. We had a lot of pins and we didn’t get pinned very much. We had a solid lineup, which is good, and that’s what you’ve got to have to win a state championship.”

Junior James Parana finished with a 7-0 record. Six of his wins were by pin.

“We just try to get the best competition to keep them a little bit humble and hungry and working hard,” Martinek said.

Decatur was back to Bayside Conference competition this week, hosting the Wicomico Indians on Wednesday in Berlin.

Senior Austin Miller started things off with a pin in the 106-pound weight class.

Wicomico then forfeited the next eight matches.

Senior Jonathan Church finished the meet with an 11-2 major-decision victory at 285 pounds.

“I think overall, the kids wrestled well,” Martinek said. “I was really happy with the JV kids. It was nice to get some matches for the program … I was really happy with John Church at the end. He had to bump up to heavyweight and ended up giving up 60 pounds – he was 210 and the other kid was 270. He’s been wrestling well.”

Decatur will compete in a tri-meet with the Colonel Richardson Colonels and St. Michaels Saints today, Friday, in Federalsburg, Maryland, at 5 p.m.

On Monday, the Seahawks will take a trip to Camden, Delaware, to face the Caesar Rodney Riders at 6 p.m.

“Right now we have a solid lineup. We’re wrestling well, we’re healthy, we’re making weight, so if that can continue, we’ll be in good shape,” Martinek said. “I like where we’re at. We just got to keep working hard and get better every day.”

Some clouds in the morning will give way to mainly sunny skies for the afternoon. High near 35F. Winds NNW at 10 to 20 mph.