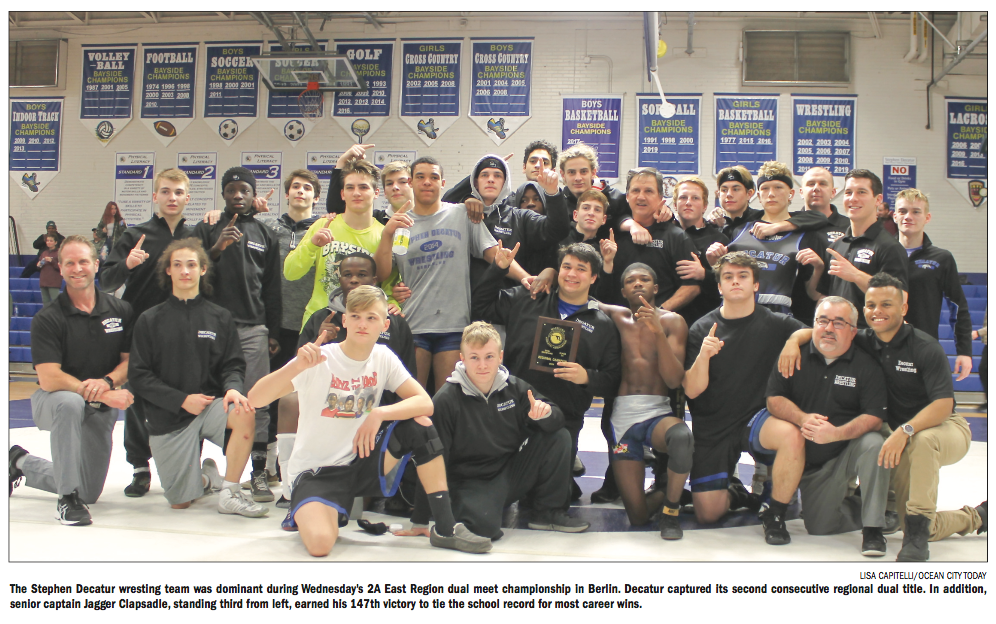 (Feb. 14, 2020) The Stephen Decatur wrestlers again showed their strength and power on the mat, easily winning their second consecutive regional dual title on Wednesday in Berlin.

“Dominant. They were just dominant,” said Decatur Coach Todd Martinek. “We really set the tone from the beginning to the end.”

The undefeated Decatur squad was seeded No. 1. The Seahawks faced the fourth-seeded Queen Anne’s Lions in the semifinal round and won, 62-12.

Decatur and Kent Island battled for the 2A East Region dual title, but it was no contest. The Seahawks came out on top, 57-6.

Clapsadle started it off for Decatur, winning his 126-pound match, 13-7.

“It’s really exciting. I’m still working toward my ultimate goal of being a state champ,” Clapsadle said. “I just try to wrestle hard every match.”

“He’s got a lot of matches still to go this year. He’ll beat it pretty good,” Martinek said.

“I’m really proud of the team. They really stepped it up,” Clapsadle said.

“We looked good. We just got to stay healthy for a few more days [and] make weight again,” Martinek said. “I don’t think there’s many teams that really want to wrestle us. I wouldn’t.”

Decatur will compete for the 2A state dual championship on Saturday at North Point High School in Waldorf.

Decatur is the No. 1 seed and will face No. 4 Sparrows Point in the semifinal round at noon. Second-seeded LaPlata will battle No. 3 Glenelg in the other semifinal round.

The winners will go head-to-head for the championship at 4 p.m.

“We’ve just got to keep focusing on what we need to get better at and make weight,” Martinek said. “If everybody does their job, hopefully we come home with another state title on Saturday. That’s our goal. I’m excited. I’m looking forward to Saturday. I’d like to go right now.”

Decatur captured the 3A East Region dual meet championship – the team’s first since 2011 – last year. Decatur also won the 3A state dual title. The last time the squad had won a state dual championship title was in 2008.

A mix of clouds and sun early, then becoming cloudy later in the day. High 56F. Winds SSE at 5 to 10 mph.