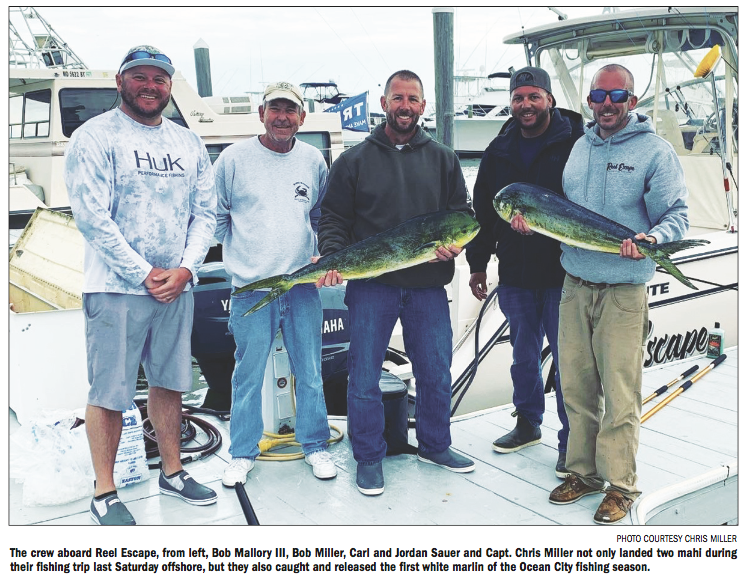 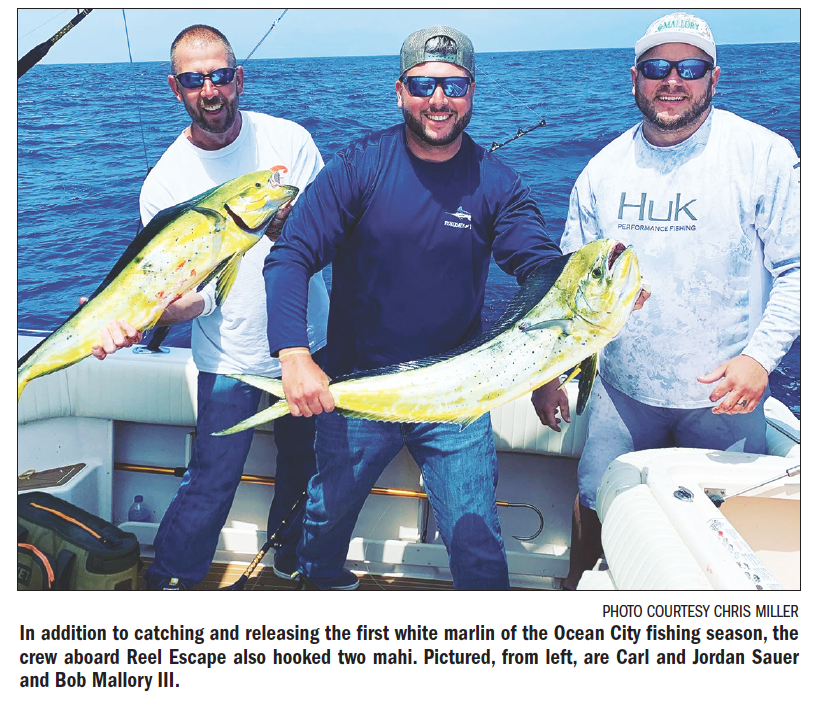 Crew aboard Reel Escape catches, releases billfish while out fishing for tuna

(May 29, 2020) The plan for the five-man crew aboard the Reel Escape was to go offshore and catch some tuna last Saturday. Well, they didn’t boat any tuna, but the group – to their surprise – did land the first white marlin of the Ocean City fishing season.

“It’s an awesome feeling, but I’m kind of in shock because we weren’t looking for it,” Capt. Chris Miller said. “We were like, ‘did that just really happen?’ I feel thankful and blessed.”

Miller purchased the 33-foot 330 Grady White Express last August and had been working on it to get it ready for the 2020 fishing season.

The group, which included Miller, his father, Bob; Carl Sauer and his son, Jordan; and Bob Mallory III, were originally slated to go offshore the weekend before, but they canceled the trip because of poor weather conditions.

Last Saturday’s weather was also less than stellar. The group, fishing together for the first time, left Pines Point Marina in Ocean Pines around 5 a.m. It was Miller’s first time taking the boat offshore.

It was foggy and rainy and the water was rough, but they continued on. It was pouring rain for a majority of the ride out, Miller said.

Miller, of Bowleys Quarters, Maryland, said he kept saying to himself, “please make this trip worth the ride.”

“We were all on the same page,” he said. “It was a great way to break the boat in. Everything ran smoothly.”

“We gave up going the first time. We couldn’t give up twice,” Carl Sauer said. “It wound up being a good decision.”

It took about four and a half hours to arrive at their destination, the southern side of the Washington Canyon, about 85 miles offshore, where the water temperature ranged from 68-72 degrees.

The crew put their eight lines in the water and began trolling for tuna.

Since it was Carl Sauer’s first fishing trip offshore, he was handed the rod to fight whatever was on the other end. The rest of the lines were cleared while Sauer battled the fish.

“There was a rush to get the lines in. There was just a lot of commotion,” he said. “I was just hanging on for dear life. The fish was running and taking a lot of line.”

When one of the guys asked if he was OK, Sauer said he answered, “it feels like I have a Volkswagen on the end of this rod.”

When the fish stopped running, he reeled and reeled. The group wasn’t sure what was hooked until it was next to the boat. They saw it was a white marlin.

“Everyone was shocked, but there was a lot of excitement,” Sauer said.

Jordan Sauer grabbed the leader – which cut his hand up a bit – so the marlin would not go under the boat. In the process, the line got chafed on the side of the boat and broke, but not before it was deemed an official catch and release because Sauer had touched the leader.

“The fish realized it was hooked then darted down,” Miller said. “It never jumped. It was tangled in the spreader bar the entire time.”

Sauer fought the fish for about 20 minutes, but he said it felt like an hour and a half.

“It was like no other fish I’ve caught, and I’ve caught some good-size fish in the bay, but nothing like this,” Sauer, who lives in Fair Hill in Cecil County, said. The 49-year-old has been bay fishing for at least 30 years, he said. “It’s my first white and I hope it’s not my last.”

“It’s a hell of an accomplishment for his first time offshore,” Miller said.

Miller estimated the fish, from the tip of the bill to the tail, to be about 6.5 to 7 feet.

“It was a nice-size fish,” he said. “Everything happened so quick. It took a few minutes to process what took place because we weren’t expecting it. We were kind of in shock that we had a marlin this time of year.”

Miller said he sent a text his friend, Rusty Daub, at noon that they had just released a white marlin. The group had no idea it was the first white marlin of the season.

“We didn’t think anything of it because we were just out fun fishing,” Miller said. “We didn’t put two and two together. We had no idea about the white. It’s funny how that all played out.”

They celebrated the release for a few minutes then put the lines back in the water and continued to fish. About 20 minutes later they caught two mahi. Miller said they weighed 25-30 pounds each.

The group fished until close to 2 p.m. They decided to head back to shore because of a shift in the wind and the sea was supposed to get rougher.

As they got back to the dock there was a buzz around the fishing community about their catch.

It is a tradition when someone catches their first white marlin that they jump in the water. When the group got back to the marina, Sauer went for a swim.

“It was a surreal experience for me,” Sauer said.

Miller said it finally set in later that night that they had just landed the first white marlin of the season “when our phones started blowing up.”

“It’s a surreal kind of feeling,” Miller said. “It will probably never happen again in my lifetime.”

He has been fishing offshore for about four or five years and bay fishing about 15 years. His father has been bay fishing 50-plus years and occasionally in the ocean, Miller said.

Miller and Jordan Sauer work together and have fished together before. It was his first time fishing with Carl and Mallory, who was the “designated gaffer.”

Miller and the Sauers had discussed going offshore fishing months earlier while sitting in a blind duck hunting this past winter, Carl said.

The Ocean City Marlin Club also offers a $5,000 prize to the club member who catches the first white marlin of the season. Since no one on board Reel Escape is a Marlin Club member, the money will go to the crew aboard Talkin’ Trash, which released a marlin shortly after the Reel Escape last Saturday.

At least four white marlin were release on May 23. The Ocean City Marlin Club has been keeping detailed catch records since 1936. May 23 is the earliest a white has been released in Ocean City.

The previous earliest catch and release was in 2015, when Dale Downey and Got-R-Done Capt. Rick Schafer landed a marlin on May 24.

Partly cloudy. A stray shower or thunderstorm is possible. High 79F. Winds NE at 10 to 15 mph.