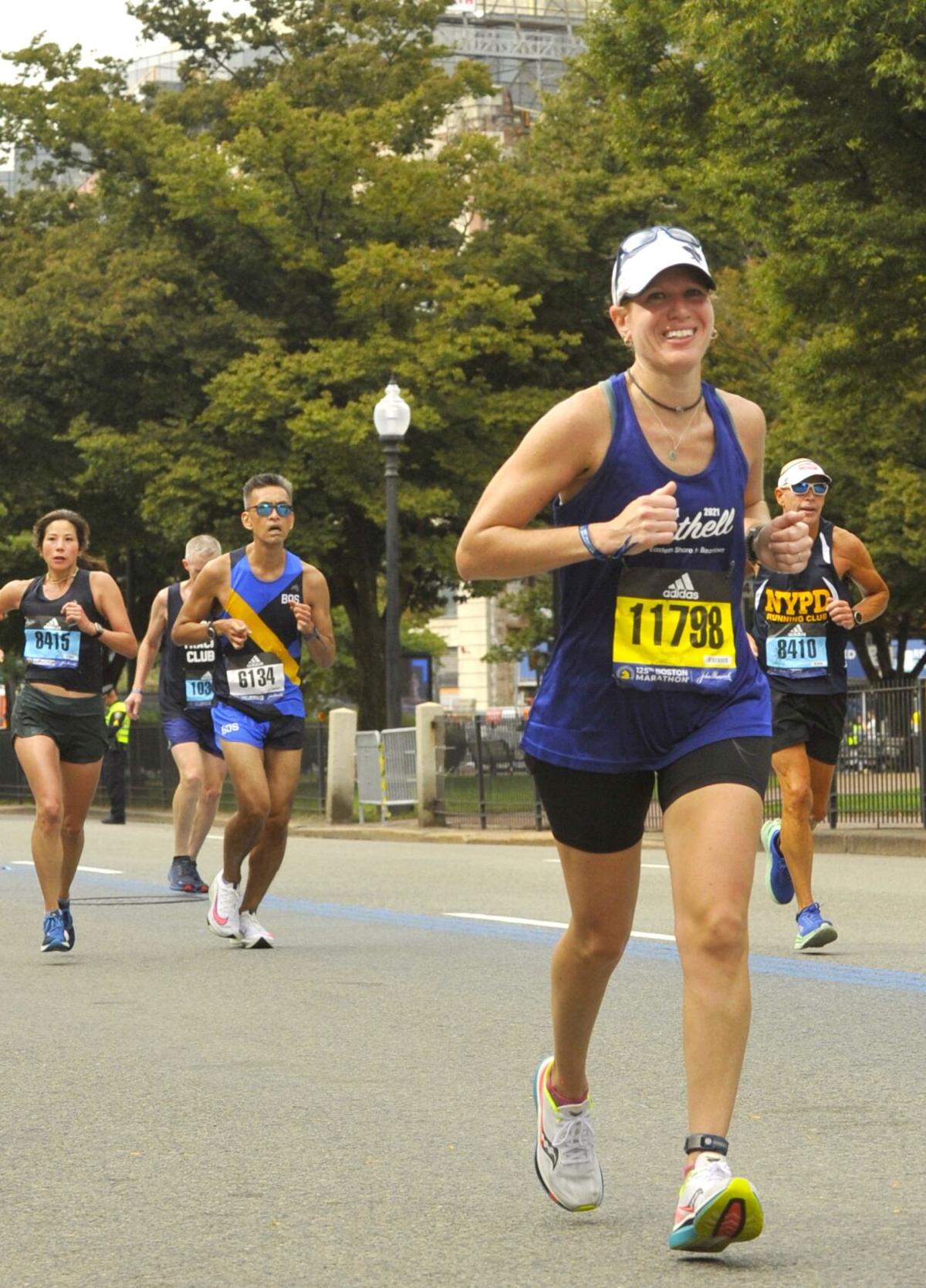 Berlin resident Karen Cathell participated for the first time in the Boston Marathon on Oct. 11. 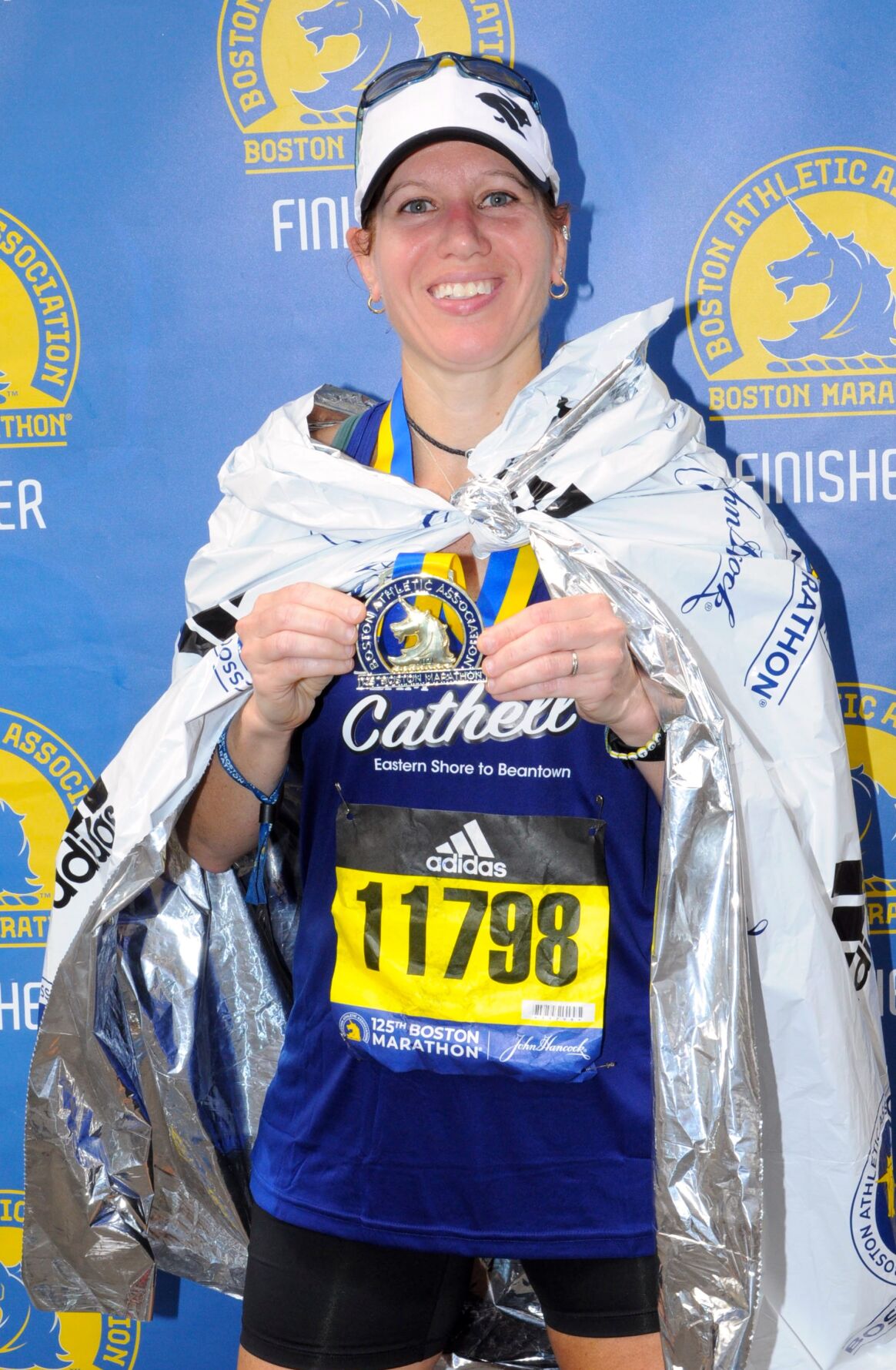 Karen Cathell shows off her medal after finishing the 125th Boston Marathon on Oct. 11. She completed the race in 3:34:26.

Berlin resident Karen Cathell participated for the first time in the Boston Marathon on Oct. 11.

Karen Cathell shows off her medal after finishing the 125th Boston Marathon on Oct. 11. She completed the race in 3:34:26.

(Nov. 12, 2021) Berlin resident Karen Cathell fulfilled a lifelong dream when she competed in the Boston Marathon for the first time on Oct. 11.

“Since the fall of 2017 I was chasing my dream to qualify,” Cathell said. “The crowd support was the most I’ve ever experienced in any of my races. All 26.2 miles were lined with spectators cheering, screaming, hooting and hollering. The town shuts down, businesses aren’t open along the course.”

Just over 15,000 runners participated in the Boston race, she said.

“A smaller field size was held this year due to covid restrictions (typically 30,000 run), which then made for a harder/faster qualifying time needed to be accepted,” the 40-year-old said. “Just because you run a qualifying time does not mean you will be accepted. From that pool of those who registered, the fastest are accepted. This year you needed to run your qualifying time, plus 7 minutes 47 seconds faster.”

November 2019 Cathell ran the Philadelphia Marathon to qualify for Boston in a time of 3:31:08. For women 40-44 years old, runners needed 3 hours 40 minutes or faster to qualify.

Her training period for Boston was an 18-week plan, averaging 40-50 miles a week, which included running five days a week during the heat and humidity this summer.

“Rob ran the entire race with me. This was much appreciated company. David is faster than us, so he ran ahead,” she said.

The temperature was warmer than ideal marathon weather, she added, and many people cramped up after mile 18.

“I ran another Boston Qualifying (BQ) time of 3:34:26. I was very pleased with my time. I ran evenly-paced splits,” she said. “The first half is mostly down hill, which is very tough on the legs, second half of the course is hilly. The course is considered a challenging marathon with four hills in the second half. One at mile 20.5 [is] famously known as ‘Heartbreak Hill.’”

This recent trip to Boston was a family affair, Cathell said. She was joined by her husband, James; two daughters, Mackenzie and Brooke; her two brothers, and their parents, Janice and Joseph Stevenson; and Rob’s wife, Megan.

“Nine of us celebrated this historical moment,” Cathell said.

“My dad ran the 100th anniversary Boston in 1996. He’s inspired me through the years to run marathons, and set a goal to run one in every state. One of the greatest memories I’ll hold close to my heart is getting the family photo of my dad, myself and both brothers standing on the finish line in Boston,” Cathell said. “My mom is, of course, our greatest cheerleader and supporter.”

The 2022 Boston Marathon is a strong possibility for Cathell.

“Boston had always been held in April on Patriots’ Day. This year’s 125th anniversary race was the only time it was ran in October,” Cathell said. “Next year’s 2022 race will return to Patriots’ Day. Stay tuned … you may just see me there in April.”

Some clouds this evening will give way to mainly clear skies overnight. Low 29F. Winds NW at 10 to 15 mph.

Partly cloudy skies in the morning will give way to cloudy skies during the afternoon. High 44F. Winds N at 5 to 10 mph.