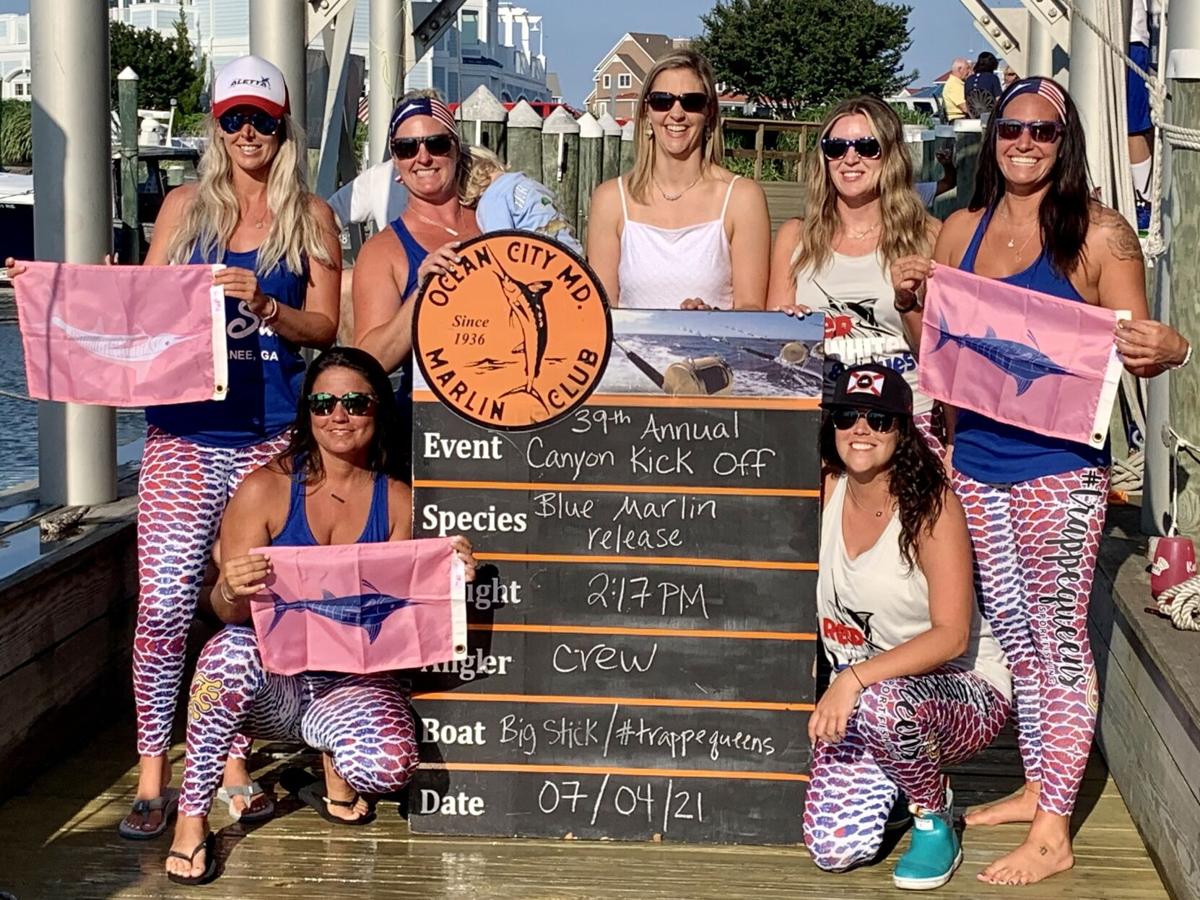 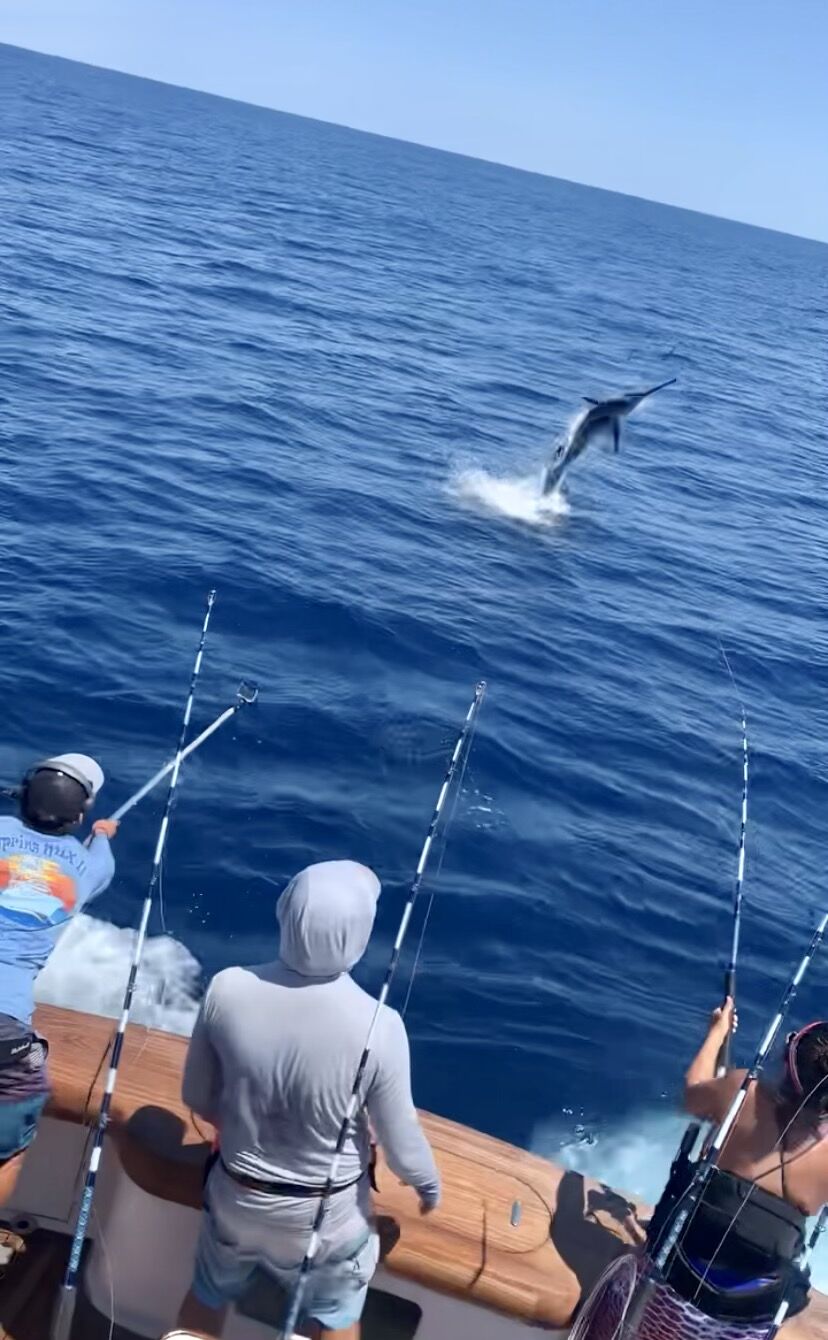 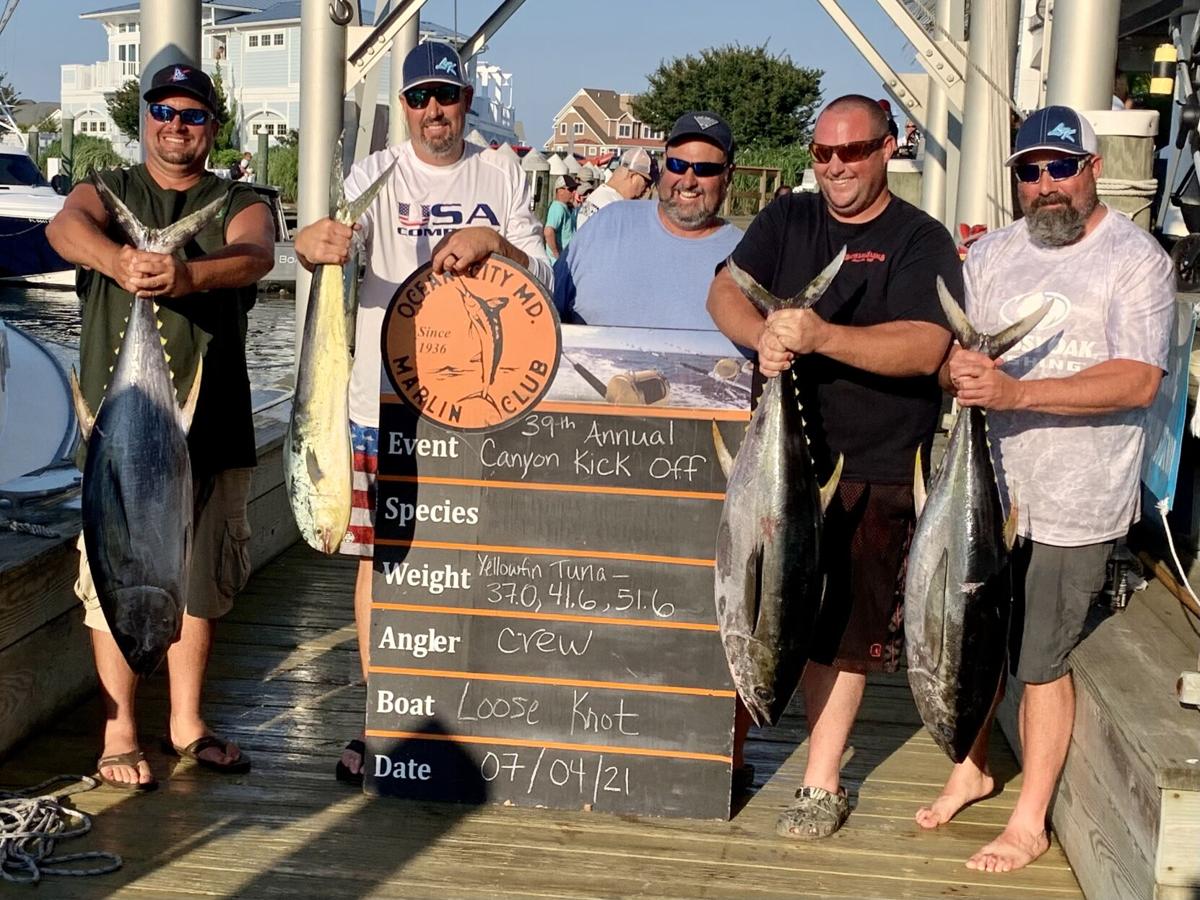 (July 9, 2021) The Big Stick/#trappequeens team released two blue marlin and one white to win the billfish release division of the Ocean City Marlin Club’s 39th annual Canyon Kick Off Tournament last weekend – and the anglers, they are all female.

“We enjoyed it a lot. We always have a great time together,” said team captain Jackie Tenuto of Berlin. “We want to show that the girls can do it just as good as the boys. Four of the girls are moms, so it’s something the kids can look up to. They have strong, independent moms that can [fish] too.”

Tenuto has fished in the Canyon Kick Off for several years. This was the first time with an all-female crew.

The group has competed in several ladies-only tournaments, but now they want to branch out and “try to fish with the big boys,” Tenuto said.

Tenuto met nearly all of her team members through fishing. Most of the ladies fish together often, while some do a few tournaments here and there.

They traveled from along the coast to Ocean City for the competition. The seven on the team for the Canyon Kick Off were: Tenuto, Allison Wigley and Rachel Wehrle both of Stuart, Florida, Natalia Frost (Morehead City, North Carolina), Kristin Lewis (Ocean City), Heather Hourihan (Hunt Valley, Maryland), and Megan McNamara (Lehigh Valley, Pennsylvania).

On Saturday, Wigley fought a blue marlin for more than three hours. Unfortunately, they had to cut the fish loose before officially recording a release in order to get their daily catch report in on time. Tenuto had already released a blue marlin that day, and the team didn’t want to lose its 150 points.

The next day there was another blue marlin bite, and this time, after a 45-50-minute fight, Wigley was able to record an official release.

“She got her redemption,” Tenuto said.

“We started as a ladies team, but we wanted to show we can compete with the boys too, and that we’re just as good as the boys are,” Tenuto said.

Tenuto and Frost are the original members of the team, then several women joined in, starting with Wigley and then Wehrle.

The team name came about during a fishing tournament in Costa Rica in February 2019. Tenuto and Frost were fishing on the boat Tuna Trappe, and the group needed a team name. Tenuto took the word Trappe from the boat and after hearing the song, “Trap Queen” by Fetty Wap, came up with #trappequeens.

“It’s the first boat we ever fished on together as a ladies team,” she said.

The team now uses that for every tournament it competes in. The group also has an Instagram page, @trappequeens_sportfishing.

Tenuto said for 2021 she plans to participate in eight tournaments, including ladies-only events, the Marlin Club’s Heels and Reels and Bahia Marina Tournaments’ Poor Girls Open, with some of her teammates. She will also compete in the White Marlin Open and The MidAtlantic Tournament.

The Big Stick/#trappequeens team won $5,886 for placing first in the Canyon Kick Off.

“For me personally, it was extra special to win this with my best girls in the cockpit and my boyfriend [Capt. Ronnie Fields] driving the boat,” Tenuto said. The mates were Brad Wilson and Marshall Freng.

The Fish On team came in second place with one blue marlin release. The crew was awarded $1,224. The Brenda Lou team released one white marlin to finish in third place.

The only qualifying dolphin was caught aboard Kilo Charlie. The 14.6-pound dolphin was worth $8,280.

The turnout for the tournament was lower than usual because of less-than-stellar offshore weather and rough seas. A total of 23 boats were entered and overall payout to the winners was $23,670.

“It turned out well for the small amount of participants,” said Marlin Club President Boz Jefferson. “We probably would of had 60-plus boats if the weather was better, but $20K-plus is not bad considering the number of boats. They still caught fish and everybody had a good time.”