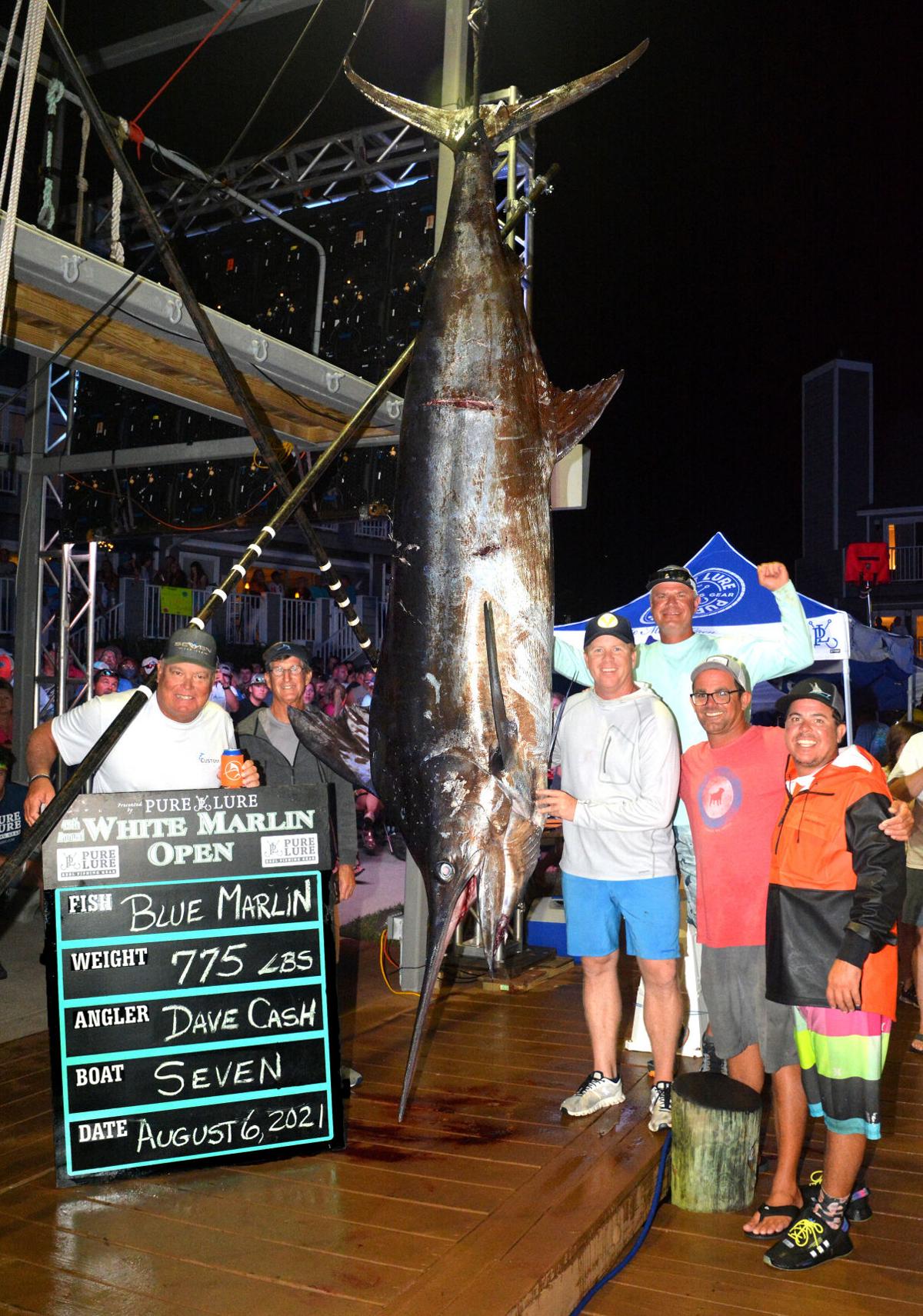 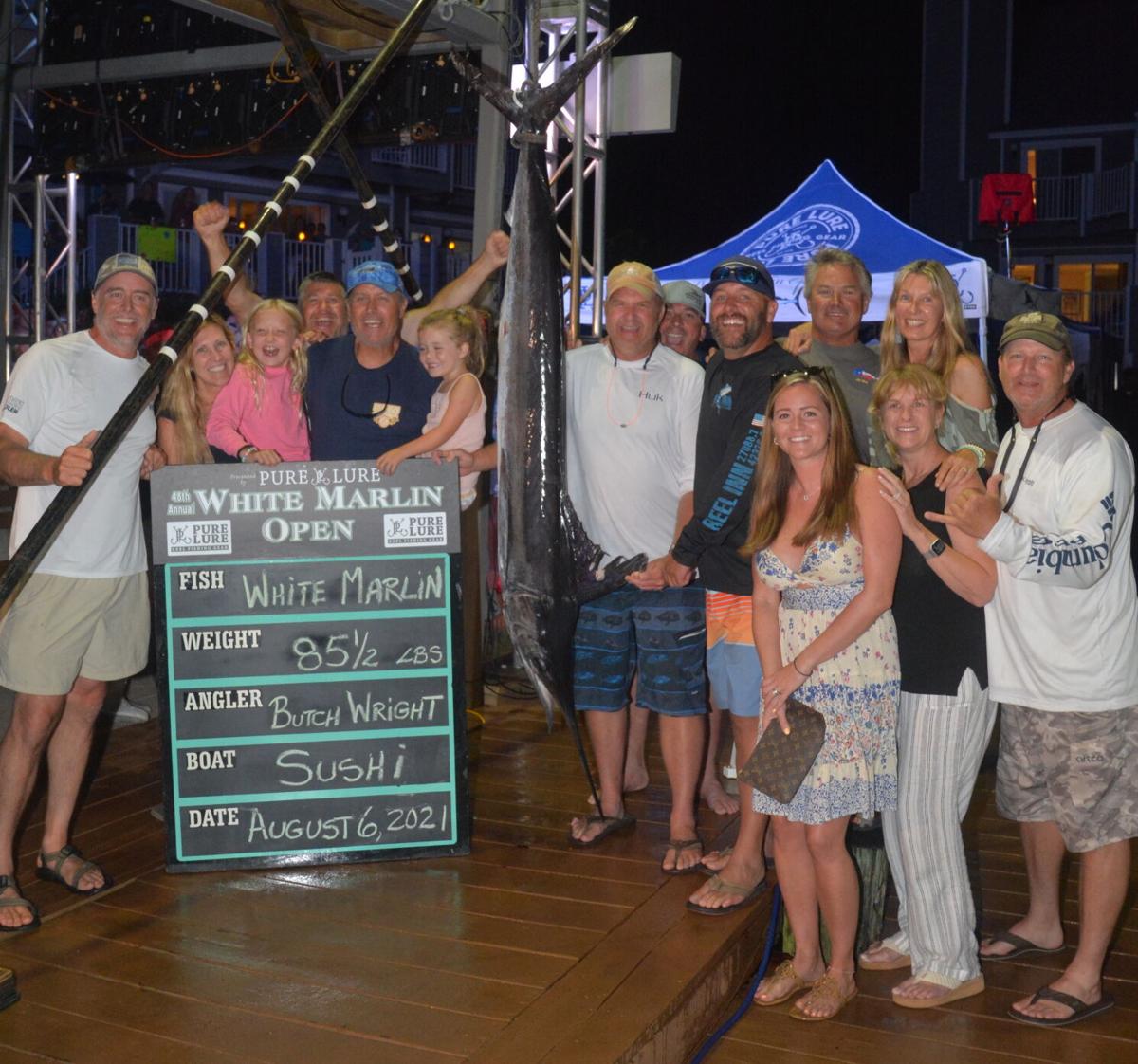 The crew of the Sushi is joined by family as the group weighed Butch Wright’s 85.5-pound white marlin last Friday, the final day of the White Marlin Open. The billfish took over first place and was worth more than $3.2 million. 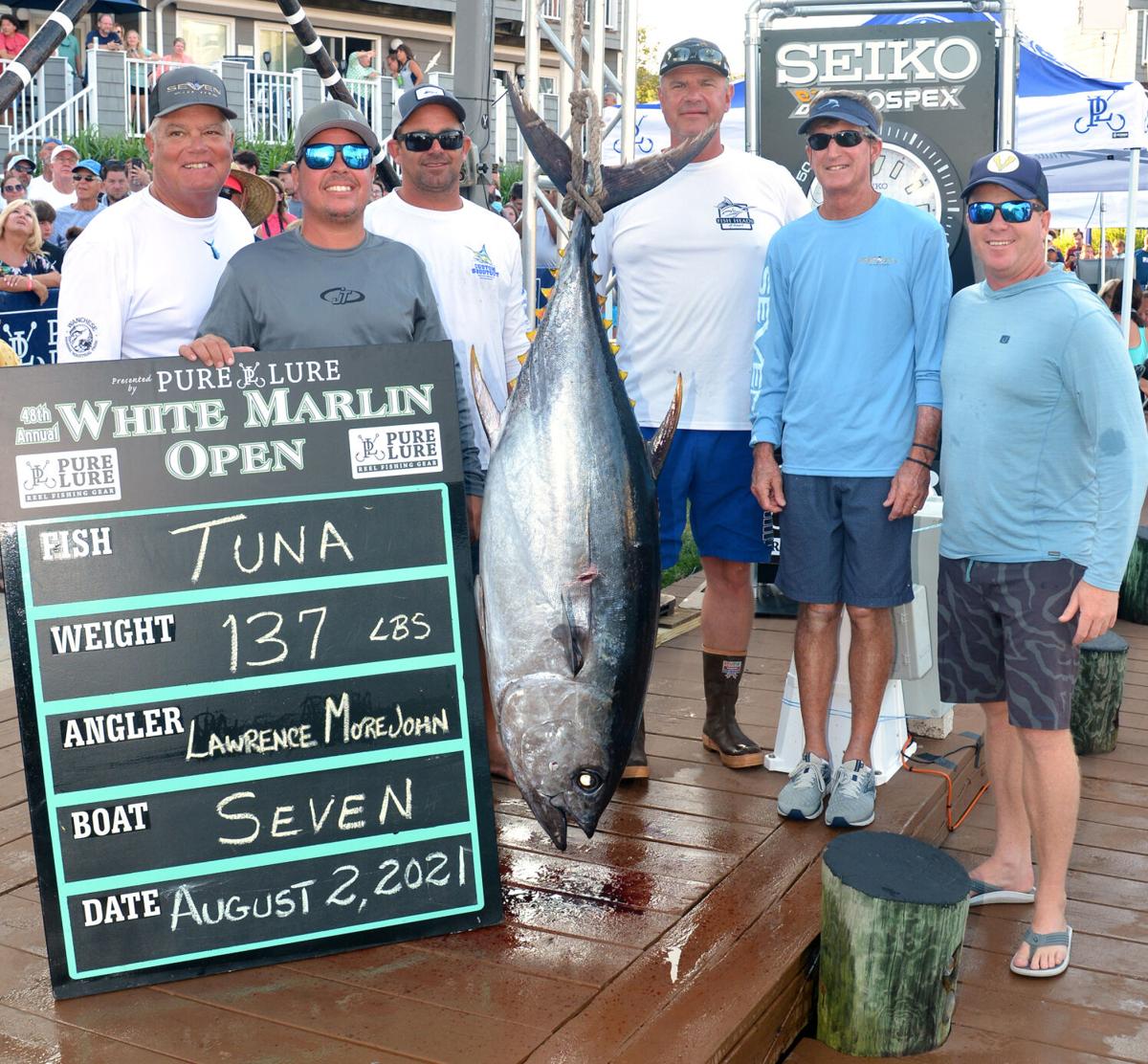 The Seven crew pose with Lawrence Morejohn's 137-pound tuna, the first-place fish in the division.

The crew of the Sushi is joined by family as the group weighed Butch Wright’s 85.5-pound white marlin last Friday, the final day of the White Marlin Open. The billfish took over first place and was worth more than $3.2 million.

The Seven crew pose with Lawrence Morejohn's 137-pound tuna, the first-place fish in the division.

(Aug. 13, 2021) With over 400 boats heading offshore last Friday, the final day of the 48th annual White Marlin Open, there was expected to be some shakeup on the leaderboard, and there was.

There were new first-place fish weighed in several divisions of the tournament, and four teams won $1 million or more for their catches.

The tournament paid out over $9.2 million, a new Open and world record.

As of last Thursday, only one qualifying white marlin had been weighed. Mike Atkinson of Virginia Beach, caught an 82.5-pound white while fishing on Fender Bender on Monday. It was the very first fish weighed of the tournament and was worth $5 million going into Friday, the final day of the Open.

Late Friday evening, the Sushi was one of the last boats to weigh a fish. Butch Wright’s marlin tipped the scale during the final minutes of weigh-ins at 85.5 pounds to take over the top spot.

The team was also entered into Level WM, also a winner take all for white marlin. A total of 179 boats entered the calcutta, which brought the payout to $1,611,000.

The Fender Bender finished in second place and was awarded $1,980,910. Most of the money came from the new Level P Winner Take All for white marlin, which cost $20,000 to enter. The Fender Bender received this money because the Sushi team did not participate in the calcutta. Ninety-six boats entered and the pot totaled $1,728,000.

“We’re totally surprised,” said Jim Motsko, founder and co-director of the tournament. I thought 20 boats at the most would enter it and we ended up with over 90. Nobody expected that.”

The Billfisher team brought a 78.5-pound white marlin to the scale on Friday to come in third place. Angler Billy Gerlach of Jupiter, Florida, and his Billfisher teammates won $106,216.

The tournament minimum for white marlin is 70 pounds, and this year the length minimum was increased from 68 inches to 70 inches. A total of 502 white marlin were released and just 13 were boated.

The Hall Pass team won the new Small Boat Release - SBR pot of $23,400 – 26 boats entered – for releasing one white and one blue marlin.

The Seven team came to the scale with a white and blue marlin on board. The white, caught by Paul Vriesema of Palm Beach Gardens, Florida, weighed 77 pounds, and held third place for a few minutes, until the Sushi’s fish bumped it down to fourth place.

The blue marlin drew excitement as it was hoisted out of the boat. The billfish, landed by David Cash of Palm Beach, Florida, weighed 775 pounds, and took over first place in the division.

The team was awarded $1,107,260. Most of the money came from the Level F Winner Take All for blue marlin.

Canyon Lady angler Scott Zurawski of Avalon, New Jersey, hooked a 511-pound blue on Friday. The fish was worth $105,216.

Sixty-six blue marlin were released and three were boated.

*(Payouts fluctuated in several of the divisions because of participation in added entry level calcuttas).

A total of 444 boats entered into this year’s tournament - the second largest in the event’s history. The most is 449 boat, which were entered in 2005.

“That’s fantastic. It’s more than last year [433 boats with a $6.8 million payout]. [The Open was] excellent. I’m very happy,” Motsko said. “It was essentially a three-day tournament [because of weather] – Monday, Tuesday and Friday.”

On Monday, 421 boats headed offshore. On Tuesday, 420 fished. Wednesday was a slower day, with 36 crews going offshore. On Thursday, 51 teams went fishing. A total of 402 boats took to the ocean on Friday.

In addition, the new swordfish state record was achieved during the tournament. Jacob Bertonazzi caught a 318.5-pound swordfish while fishing on Jersey Boy last Friday. The team was awarded $118,800 for participation in the Small Boat Big Fish added entry level calcutta.

The crew on Knot Stressin, which took on water on Monday while they were fighting a blue marlin and eventually sank – they were rescued from their life raft by tournament boat Fishbone – was able to get in a fishing day on another vessel on Friday. Captain and owner Bryan Martz caught a 52.5-pound tuna.

“From where it started to now, it’s become it’s own thing,” he said. “It’s just kept growing and growing … I just want to thank everybody who participated. We appreciate the participants. We can’t have it without them.”

While weigh-ins at Harbour Island Marina on 14th Street drew thousands of spectators over the five-day event, the new and improved Marlin Fest on the Third Street ballfields was well received.

The weigh-ins were broadcast live on a jumbo screen and more than 20 vendors were on hand at Third Street.

“It’s catching on. I didn’t hear anything negative,” Motsko said. “It was all positive and we’re happy with the way it went. We hope to keep it going for a while.”