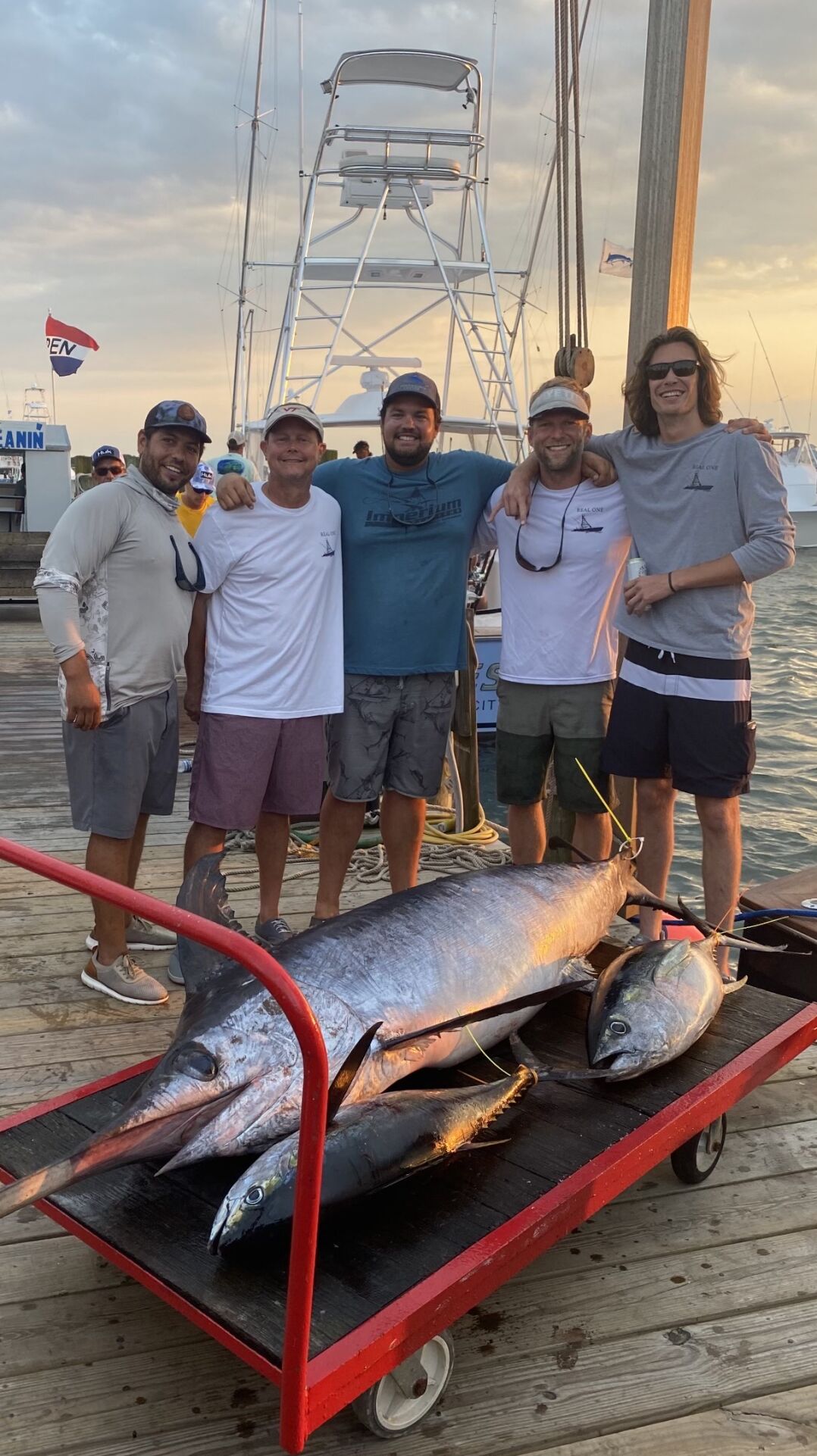 The 301-pound swordfish caught by Peter Schultz on the Real One last Friday is a new state record. Pictured, from left, are Ahmad Rush, Capt. Doug Rollins, Spencer Talbot, Schultz and Adam Gray. 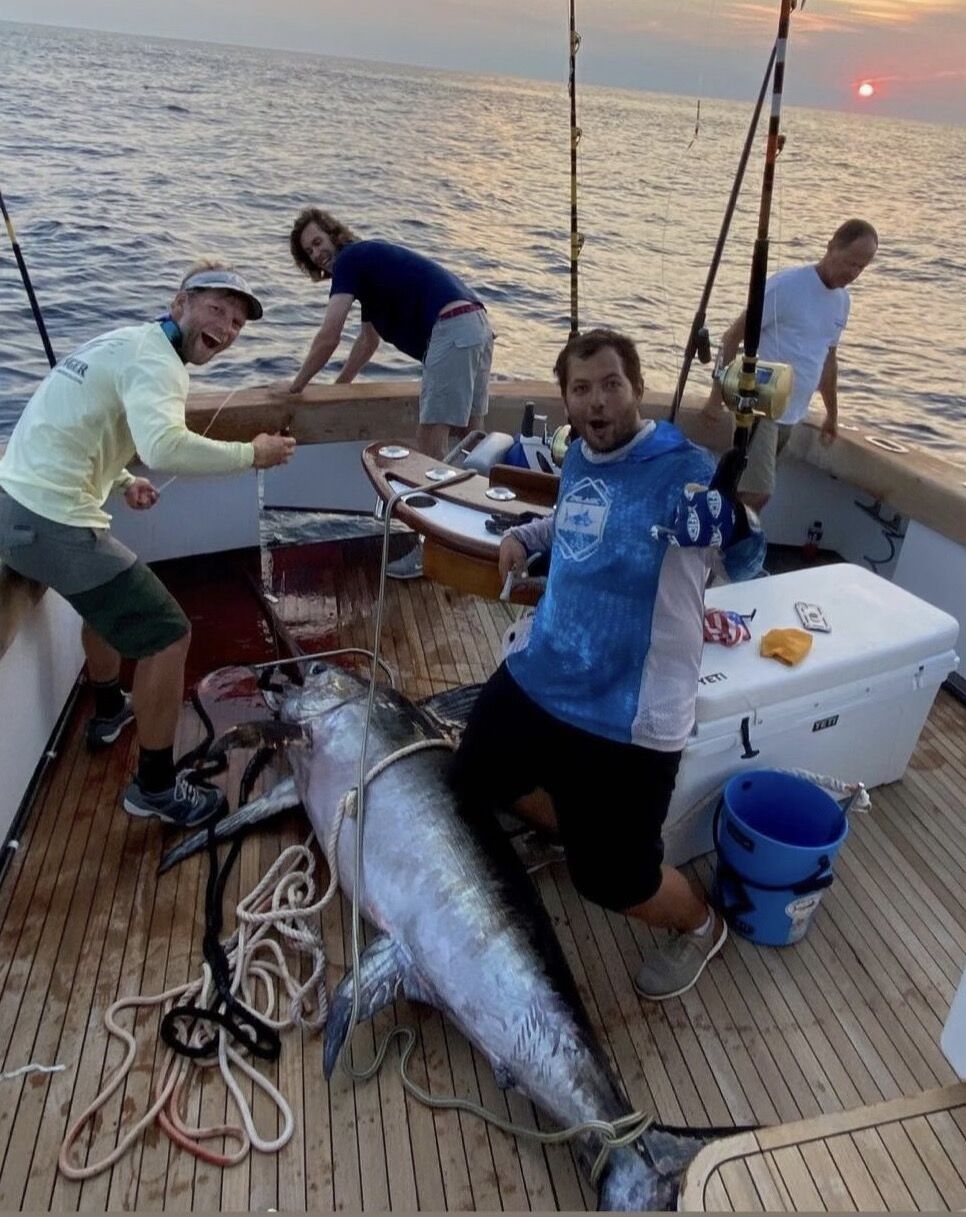 The 301-pound swordfish caught by Peter Schultz on the Real One last Friday is a new state record. Pictured, from left, are Ahmad Rush, Capt. Doug Rollins, Spencer Talbot, Schultz and Adam Gray.

The day before fishing in the Huk Big Fish Classic, Peter Schultz stopped to chat with a friend, who told him his son’s boat was broken down about 45 miles offshore.

Schultz offered to deliver the water pump and other parts to the man’s son. In the process, he was informed that the commercial fisherman had hooked a 600-pound swordfish earlier in the week and its location. So, when Schultz and his team headed out for the tournament last Friday they went to that area around the Washington Canyon.

At around noon, they had a swordfish bite. Schultz, who owns the boat, Real One, said he’s typically in the cockpit and doesn’t usually reel in fish, but he happened to grab the rod this time.

“We have a small crew, so because it’s an overnight tournament we took shifts,” Schultz said. “Everybody on the boat is capable. Everyone on the team is awesome. I just happened to be on the reel at the time.”

Within the first hour, the fish was close to the boat to harpoon, but that was against the tournament rules. The fish needed to be gaffed (a pole or stick with a hook on the end used to stab the fish and lift it into the boat).

“Then it dove back down and came back up for several hours,” Schultz said. “We had to use the gaff, so it needed to be closer. The last few feet, he just didn’t want to give us.”

So, the fight continued on … and on … and on. One of his boatmates joked that he would take over when Schultz got tired, but he was determined to bring the fish in himself. He was up for the challenge, despite his arm cramping and some muscle spasms at times.

“That’s what makes it epic. Part of it is adrenaline. It’s a legit fight and a mental battle,” he said. “You’re connected to the fish and you’re trying to feel each other out. It’s almost like you’re in the ring.”

Eight hours later, at 8:04 p.m. the fish was finally boated.

“People don’t realize how much of a team effort goes into catching a fish like that. We don’t fish together often, so it shows how skilled everyone is,” Schultz said. “A million things can go wrong, but everyone was calm and cool. We were all saying, ‘We’re getting this fish.’”

The group celebrated briefly, jumping up and down, high-fiving, hugging and smiling ear to ear, then, they started tuna fishing.

“Every minute of the tournament counts,” Schultz said.

The crew fished until 3 p.m. on Saturday then headed back to Ocean City and arrived at Talbot Street Pier, where the Big Fish Classic weigh-ins were taking place, around 6 p.m., Schultz said.

As the large swordfish was hoisted out of the boat, it drew the attention of many onlookers. It was carted to the scale and everyone watched in anticipation to see how much it would weigh.

Earlier, the FFMD (Fishing For Muscular Dystrophy) weighed a 239.5-pound sword, which Schultz said was caught overnight and only took 11 minutes to reel in. It was 87 inches, while Schultz’s was 86.

As the number climbed, it stopped at 301 pounds. It was then announced it was a possible new state record.

After the weigh-ins the crew took the fish and headed back to Sunset Marina where the boat has a dock slip.

They took the swordfish to the cutting station, where it was going to be inspected by Erik Zlokovitz, with Department of Natural Resources. He made the trip from Annapolis and arrived after midnight. Paperwork was filled out and the record was pending, until Thursday morning when it was announced it was official.

Schultz is the first record holder for the Atlantic division – Swordfish (Xiphias gladius).

“It’s super exciting,” Schultz, who lives in Annapolis but also has a home in West Ocean City, said. “The karma gods kind of blessed us with this.”

Larger swordfish have been caught in Maryland, but on electric or hydraulic reels, which disqualifies them from state record consideration.

Schultz’s fish was caught using a dead eel rigged by Zack Wilson at the Fisherman’s Center in Florida, on a circle hook; Talica 50-foot hand-crank reel with 65-pound braid Cortland line; and a 25-foot, 150-pound leader.

The 301-pound swordfish combined with Spencer Talbot’s 41.5-pound tuna earned Schultz and his team first place in the tournament and $542,648. Also on the boat with Schultz and Talbot was Capt. Doug Rollins, Adam Gray and Ahmad Rush.

“The prize money is another added bonus, just like the state record,” he said.

“It’s the first time we’ve paid out half a million to a team,” said Brian Roberts, co-Director of the Big Fish Classic.

Rounding out the top-five prize winners, the Rebel crew received $42,930 for a 61-pound wahoo. The group also boated a 21.5-pound dolphin, and a tuna stringer weight of 163.5 pounds.

The full list of winners is available at bigfishclassic.com.

A record 110 boats participated in the eighth annual Big Fish Classic. In addition, the tournament broke the million-dollar payout mark, awarding $1,224,740 to the winners.

“It was amazing. Great weather, everyone had a great time and the fishing was good,” Roberts said. “I want to thank all the staff, sponsors and participants.”

In addition to the successful tournament, several hundred pounds of fish was donated to Ocean City Baptist Church. And, more than $16,000 was raised over the weekend for the Raymond A. Wood Foundation, which provides quality of life support for childhood brain tumor survivors and their families (www.rawoodfoundation.org); the Ocean Research Project, which tracks sea level rise and temperature change (www.oceanresearchproject.org); and the Ocean City Fire Department.