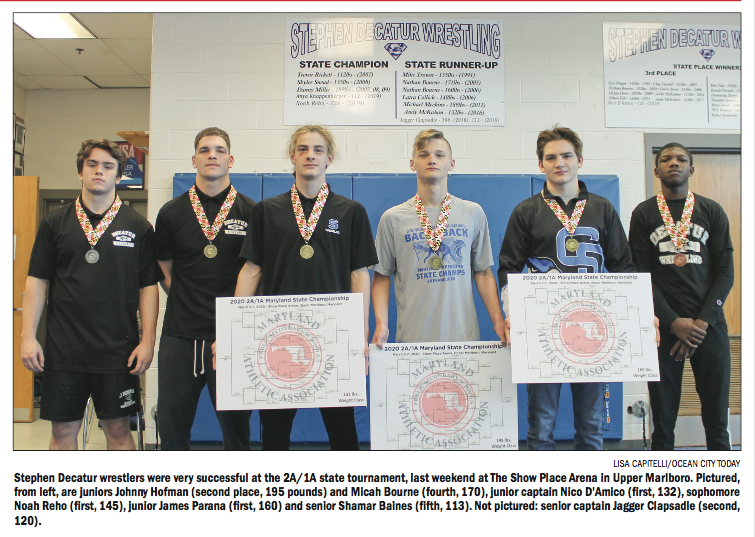 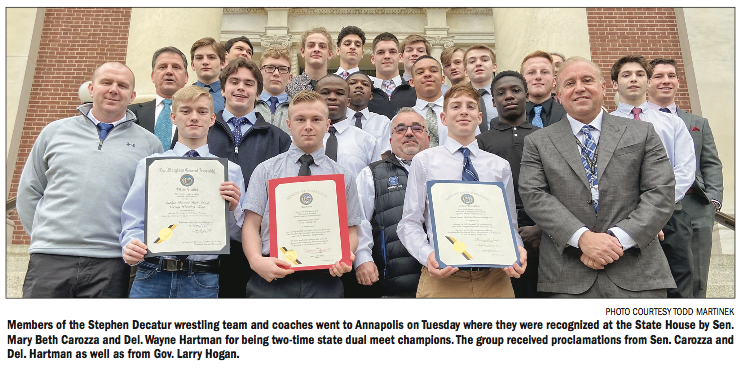 (March 13, 2020) The Stephen Decatur wrestling team capped off its season with 11 boys and two girls qualifying for the state championship, held last weekend at The Show Place Arena in Upper Marlboro.

Sophomore Noah Reho won the 126-pound division last year as a freshman. He came in first place in the 145-pound weight class this year.

“I pinned everyone, except for the same kid I couldn’t pin at regionals. Besides that, I feel like I wrestled pretty flawlessly,” Reho said. “I didn’t give up any points and got a pin in the finals, which I really wanted.”

Reho pinned his first two opponents, then earned a 10-0 major decision in the semifinal round. He pinned his opponent in the finals in 2:30.

“Every kid that I wrestled they knew that they weren’t going to beat me. The kid I beat in the finals, he told me, ‘everybody in the bracket was shooting for second,’” Reho said.

Reho said he felt calm and confident throughout the tournament.

His goal is to win four state titles during his career at Decatur.

Reho finished the season with a 38-3 record. He won his second regional title this year and also was a Bayside Conference champion in his weight class.

“I had a pretty good season, but I don’t feel like I wrestled to my capability until Baysides,” Reho said.

He will compete in the National High School Coaches Association (NHSCA) national tournament in Virginia Beach, March 27-29. Reho said he went 3-2 last year and he wants to win it this year.

“It’s the only tournament I haven’t placed in since I was in fourth grade. I just want a bit of redemption,” he said.

“I wrestled pretty good. In three of my matches I was losing, but I kept my composure and came out on top,” he said.

D’Amico pinned his first opponent. He outscored his quarterfinals opponent, 8-7. He won both his semifinals and finals matches, 4-3.

“In the quarterfinals, I slipped up and was losing 4-0, then I scored eight straight points,” he said. “In the semifinals, I was down by two – I wrested a kid who was quick on his feet then when we got top and bottom I slowed him down a little bit and wrestled my match. Then in the finals match, I was losing 2-0 and I came back and won.”

Keeping his composure was key to his come-from-behind victories.

D’Amico said it was exciting to accomplish his goal of winning a state title.

“I want to thank my coaches, my wrestling partners,” he said. “I mean, my partners are Noah Reho and Jagger Clapsadle, state champion and state finalist, no one in the state has better partners than that.”

He finished the season with a 42-1 record. He won his second consecutive Bayside title this year and took home a regional championship.

“I won a lot of matches – some of them were closer than I would have liked them to be – but I finished with one loss and that’s pretty close to perfect, so I think I did pretty good,” he said.

D’Amico hit the 100-win mark this season. He currently had 115 career victories.

D’Amico will also compete in the NHSCA national tournament. He went 2-2 last year.

“It was an amazing feeling that I won. I was really proud with this weekend,” he said. “I felt like I wrestled well and smart and gave it my all.”

Parana pinned his first opponent. He earned a 9-4 win in the quarterfinals and 3-2 decision in the semifinals.

Parana scored a 12-4 major decision in the finals.

“It felt great to win. I wasn’t that surprised, because I know that I put all the work in and I was either going to win or make a mistake, and I didn’t make a mistake,” he said. “I was a little nervous, but I was able to control it and keep my cool.”

Parana won 37 matches and only lost one this season. Parana is a two-time 160-pound Bayside champion. He also won a regional title this season.

“I felt great this season,” he said. “It was my first full season and I only had one loss, so that’s pretty good.”

“I think I could have done better, but I feel like for me it was a huge accomplishment to make it to the state finals,” he said. “Considering that three weeks ago before Baysides and everything I was ranked like 25th in the state. I feel like I kind of proved people wrong. It was a good tournament for me. I feel like I wrested really well.”

Hofman finished the season with a 37-7 record. He won the regional title in the 195-pound weight class.

“I think my season went really good overall, compared to last year with me being like 7-14, to this year being 37-7 is a huge step up for me,” he said. “I’ve got lots to work on for next year.”

“I don’t think I wrestled to the best of my ability. I just came up a bit short,” he said.

Clapsadle finished the season with a 41-4 record. He won the regional title in the 120-pound weight class.

He took over the top spot on the most career victories list at Decatur. His four-year career record is 158-18.

Clapsadle attended and wrestled for South Carroll his freshman year before transferring to Decatur.

“I really enjoyed wrestling at Stephen Decatur,” he said. “Being a three-time state finalist is pretty amazing and winning two team state championships at Stephen Decatur is also special to me. I’ll never forget my time here.”

“I think I did all right. I worked hard, but I feel like I came up a little short,” Bourne said. “Once I lost my first match [the quarterfinals] I wrestled a lot different. I did come back and win my next three to go into the third and fourth finals [where] I lost [3-2].”

Bourne went 35-7 this season. He became a regional champion in the 170-pound weight class.

“I was fighting little injuries, but I think it was a good season. It was awesome to win another [team state dual] title for sure,” he said. “I’ve got a lot of goals for next year set in mind and just to get better from here on out.”

“I’m happy with fifth place. I wanted to win it, but I had a pretty tough bracket,” he said. “I had two returning state finalists in my bracket and a two-time state champion in my bracket so it was pretty tough.”

He finished the season with a 34-8 record. Baines won the regional title in the 113-pound weight class.

He also captured his second straight Bayside title. He won the 106-pound weight class last year and came in first place in the 113-pound division this season.

“I think I had a pretty good season,” he said. “I avenged a loss. In the first round of state, I had lost to that kid at state duals and I beat him 5-0 at states. I was pretty nervous for that match.”

Baines will also compete in the NHSCA national tournament. His goal is to place top eight in his division.

Coach Todd Martinek was pleased with his wrestlers’ performance during the state championship.

“It was outstanding. It couldn’t have been much better,” he said. “We set a couple school records.”

This was the first year for a girls-only state tournament. Freshmen Jenna Danner (112) and Mia Stubblebine (180) represented Decatur. Stubblebine finished in third place and Danner came in fourth.

“They did a good job. They wrested well,” Martinek said. “The girls’ tournament was very successful. I think it will pick up next year with the number of girls.”

The Decatur wrestling team dominated its competition this season.

“It couldn’t have went any better,” Martinek said. “To go undefeated as a team and have all the success we had individual … now that it’s done, it’s pretty dramatic to do all that. It’s super impressive.”

He attributes the success to the boys’ hard work and his assistant coaches.

In addition to wrestling, the team also did yoga and group fitness workouts this year among other things.

“We did some things we haven’t done in the past. Trying to think outside the box a little bit and it paid off,” Martinek said.

In the past 50 years, Decatur sports teams have won six state championships. The wrestling team holds three of those titles.

“You can coach a long time and not have five [state finalists] in your career. To have five all at once is pretty incredible,” Martinek said. “That’s attributed to those kids’ work ethic and their desire to get better.”

Earlier this week, the team went to Annapolis where the wrestlers were recognized at the State House by Sen. Mary Beth Carozza and Del. Wayne Hartman for being two-time state dual meet champions.

The group received proclamations from Sen. Carozza and Del. Hartman as well as from Gov. Larry Hogan.

“It was a cool experience for them,” Martinek said.

The team will graduate starters in four weight classes, but a strong core group is expected to return next year. Martinek is also looking forward to the addition of JV and junior league wrestlers joining the program.

Partly cloudy this evening, then becoming cloudy after midnight. Low 56F. Winds NE at 5 to 10 mph.