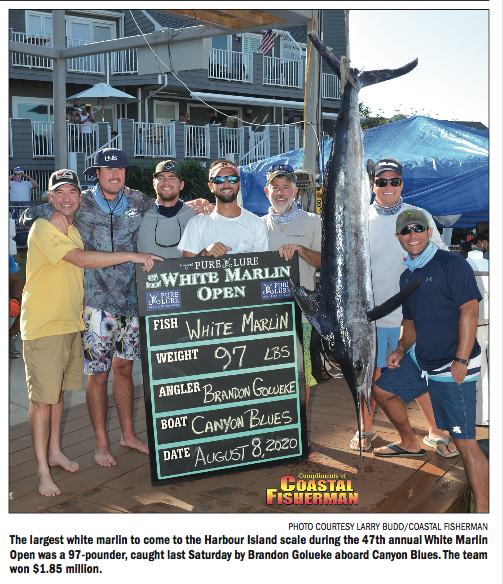 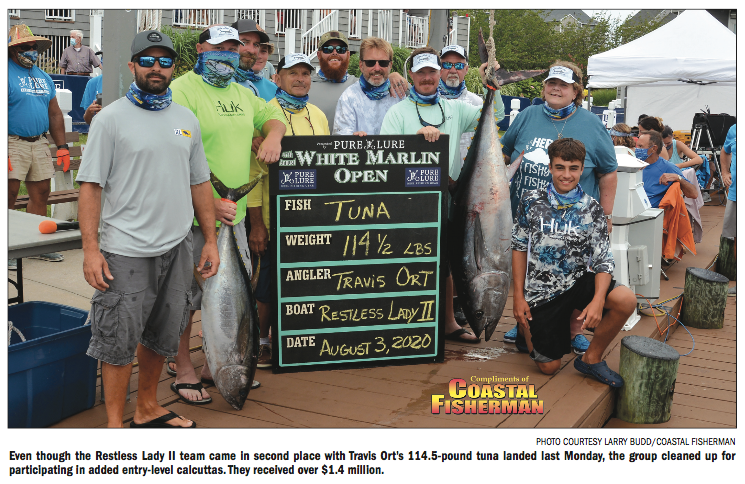 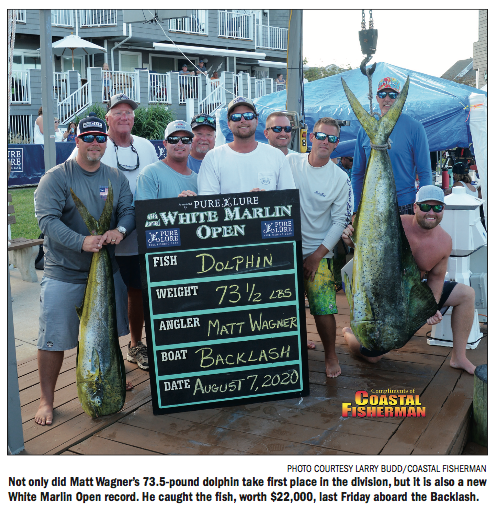 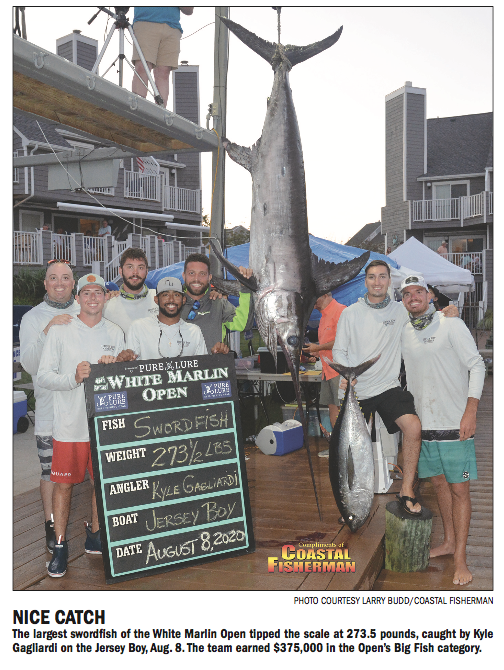 (Aug. 14, 2020) Even during a pandemic and with a tropical storm rolling through early in the week, the 47th annual White Marlin Open was one for the record books.

“It was excellent,” said Jim Motsko, co-director and founder of the tournament. “We had some really big fish – some big marlin and some big dolphin this year.”

The tournament normally runs Monday through Friday, with teams fishing three of five days. It was extended to Sunday because of Tropical Storm Isaias that move through on Tuesday.

“It worked out well,” Motsko said. “An overwhelming majority were happy with the decision. We made some good decisions along the way to make it happen.”

Motsko said in March when he saw a pro golf event was scheduled for late June, Open organizers decided the tournament would go on.

The second good decision was to add the new Pay Day added entry-level calcutta, which proved to be very successful.

And the third good decision was to extend the tournament two extra days.

“These three decisions, the way they worked out, these things made us able to pull it off,” Motsko said.

A total of 433 boats entered this year, the second-highest participation in tournament history. The most was 449 boat registered in 2005.

Three fish were worth more than $1 million each this year.

Several 70-plus-pound billfish were weighed during the tournament.

“We had a run of big fish,” Motsko said. “A vast majority weighed were round scale spearfish. We group them as one [with white marlin], but they’re two different species.”

The largest white marlin to come to the Harbour Island scale was a 97-pounder, caught last Saturday by Brandon Golueke of Chester, Maryland, aboard Canyon Blues. It measured 77 inches in length and had a 31-inch girth. It’s the third largest in tournament history.

Captain and boat owner David Grossman of Reisterstown, Maryland, said Tuesday afternoon that it was still a bit surreal.

“It’s awesome. Off-the-chart exciting in so many different ways,” he said. “It hasn’t sunk in. I’m still a little numb. I’m on cloud nine, I guess.”

Golueke said there was “a lot of excitement and a lot of adrenaline” while fighting the fish, but it wasn’t too difficult a battle.

The billfish was hooked around 1 p.m. and it was on the boat in 16 minutes.

“It was one of the biggest I’ve seen in a long time,” Motsko said. “It was definitely a nice highlight.”

The Canyon Blues crew did not enter the Level WM (White Marlin Winner Take All) calcutta, which cost $10,000 to enter, but the Drillin & Billin team did.

Crisdel angler Frank Griscola (Bedminster, New Jersey) also reeled in a 77-pounder, but since the fish was brought on board last Saturday with the assistance of a gaff – a pole or stick with a hook on the end used to stab the fish and lift it into the boat – it finished in third place.

According to the White Marlin Open rules, “in the event of a tie in the weight of a white marlin, the fish that is not gaffed will be considered the winner of the two.”

This rule was implemented years ago to prevent fish from being needlessly killed and to conserve the species.

A total of 816 white marlin were caught during the tournament; just 57 of them were boated.

All of the 48 blue marlin hooked were released.

A few years ago the minimum length for white marlin went from 67 to 68 inches. Motsko said next year organizers may increase the minimum to 70 inches.

Seven spearfish and three sailfish were caught. None were boated.

Two swordfish were weighed, the largest tipped the scale at 273.5-pounds, caught by Kyle Gagliardi of Vineland, New Jersey, on the boat Jersey Boy.

No qualifying blue marlin were weighed.

The Sentient crew took first place in the tuna division, with Frank Whirley’s (Cambridge, Maryland) 121-pounder hooked last Thursday. The fish was worth $99,000.

Even though the Restless Lady II team came in second place with Travis Ort’s (York, Pennsylvania) 114.5-pound tuna landed on Monday, the first day of the Open, the crew cleaned up for participating in two big added entry-level calcuttas.

The group entered the new Level Pay Day, which cost $1,500 to enter. A total of 253 teams register and the calcutta pot totaled $341,550. Each day’s purse was split evenly among those on the leaderboard in first, second or third place for white marlin, blue marlin and tuna that day for those entered into the calcutta.

In addition, Restless Lady II entered the Level F (Heaviest Blue Marlin Winner Take All) added entry calcutta. Since no qualifying blue marlin were weighed and each of the three white marlin winners as well as the first-place tuna did not enter the Level F, the money in that calcutta went to the Restless Lady II.

Boat owner and captain Sean Welsh of West Ocean City, said being awarded over $1 million for a tuna “still hasn’t totally sunk in.”

Restless Lady I had two tuna bites, but both were lost. Despite rough sea conditions, Restless Lady II crew was able to boat their catch.

“A great game plan came together. It paid off quite nicely,” Welsh said. “We got paid every day [for the Pay Day calcutta] and there was no qualifying blue so we got the money in that category, and we were in the daily tuna. A couple of guys on that boat, I changed their life, for sure. I’m happy for everyone.”

Both of Welsh’s boats are docked at Talbot Street Pier in downtown Ocean City.

Not only did Matt Wagner’s (La Plata, Maryland) 73.5-pound dolphin take first place in the division, but it is also a new tournament record. The previous record was 71 pounds set in 1986.

He caught the fish, worth $22,000, last Friday aboard the Backlash. It is one pound off the state record.

No qualifying sharks were brought to the scale.

Thousands of spectators of all ages visit Harbour Island annually each of the tournament days to watch the weigh-ins. Because of covid-19, safety concerns and social distancing guidelines and regulations, Harbour Island was closed to the general public this year.

Instead, there was a new family friendly viewing location at the Third Street ballpark on St. Louis Ave., Monday through Friday. A large Jumbotron was set up live streaming the weigh-ins.

Rain hampered attendance a bit, but overall, Motsko through having the Third Street location went well overall. Motsko said he would like to offer the Third Street ballpark to weigh-in spectators next year and will meet with Town of Ocean City officials to discuss.

For more information about the tournament, visit www.whitemarlinopen.com.

Generally cloudy. Slight chance of a rain shower. High around 65F. Winds SW at 10 to 15 mph.