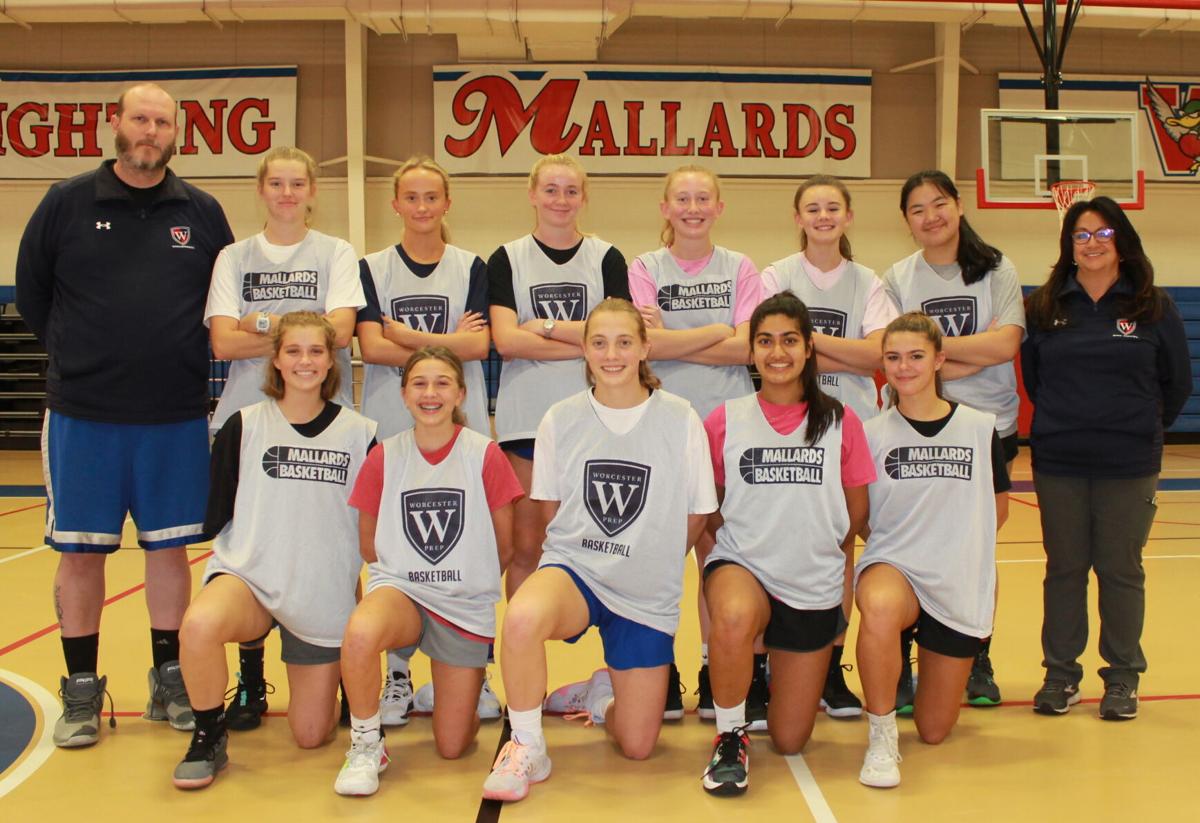 “We have a deep bench. It’s a really strong team. It puts us in a good position to have a successful season,” said Worcester Prep girls’ basketball team Coach Mike Kelley. 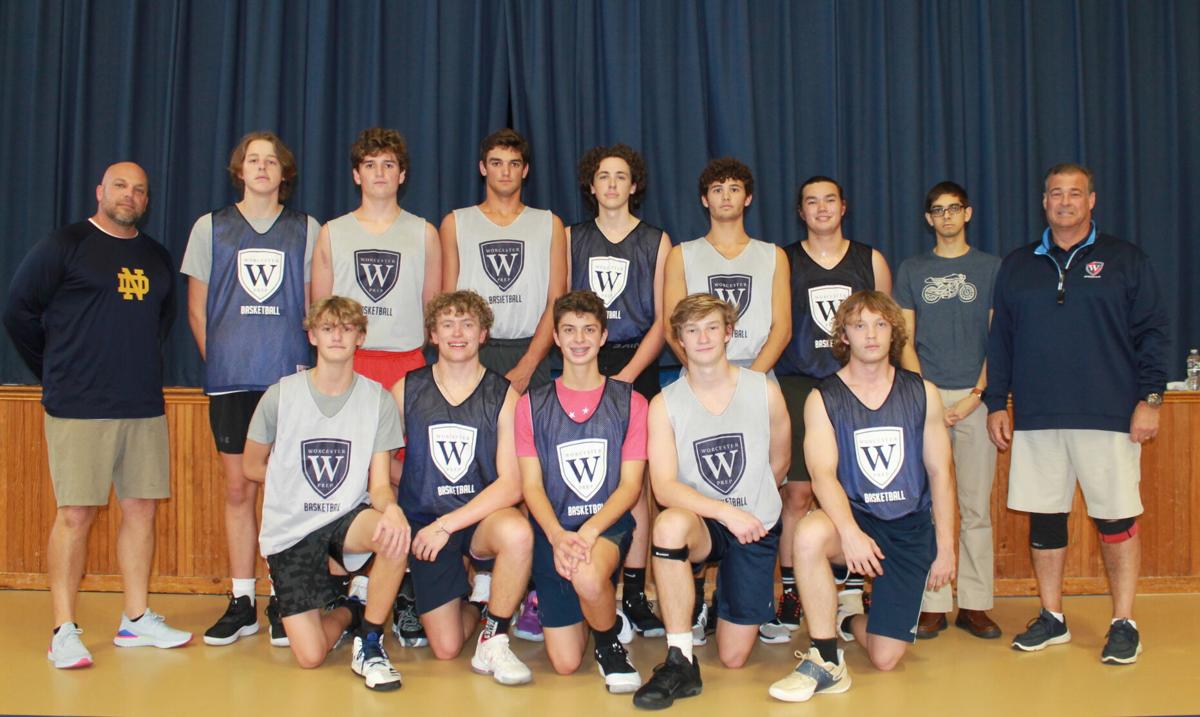 “The returners are pretty solid [and] some of the new guys will help out,” Worcester Prep boys’ basketball team Coach Pat Moylan said. “They’re very good athletes and very competitive.”

“We have a deep bench. It’s a really strong team. It puts us in a good position to have a successful season,” said Worcester Prep girls’ basketball team Coach Mike Kelley.

“The returners are pretty solid [and] some of the new guys will help out,” Worcester Prep boys’ basketball team Coach Pat Moylan said. “They’re very good athletes and very competitive.”

(Nov. 26, 2021) The Worcester Prep basketball teams have returned to the court and players and coaches are looking forward to a full season of competition.

“So far it’s going really well. We have great numbers, 40-plus in each program,” said Worcester Prep Athletic Director Matt McGinnis. “They’re all ecstatic. They’re glad to be back to a ‘normal’ season.”

The 2020-21 season was shortened because of covid. The girls’ squad only played six games (5-1) and the boys’ team had three matches (1-2). And, only varsity teams played last year. There was no JV competition. All are back in action this season.

There are several protocols in place to keep everyone healthy and safe.

Last year, athletes had to wear masks while playing. This season, they only need to wear face coverings when sitting on the bench. Coaches will be wearing masks.

Two schools – Delmarva Christian of Delaware, and Gunston of Centreville – will be wearing masks during competition. When Worcester plays those schools in their respective gyms, face coverings will be worn.

Fans are encouraged to social distance while sitting in the stands. All fans must wear masks. Attendance will not be limited at this time.

“Everyone’s pretty pumped up and excited,” McGinnis said. “This senior class of student-athletes is one of the top ones I’ve been blessed to work with. They’re all strong leaders, they lead by example, they’re athletic and they care about doing their best.”

“We’re trying to bring together Mallard Nation,” he said.

Preseason practices kicked off on Nov. 8. The teams have the holiday weekend off and will get in one more practice on Monday before a flurry of games begin.

Both varsity teams will play Greenwood Mennonite on the road on Tuesday. They will then host Chincoteague on Wednesday. The girls will compete at 4:30 p.m. and the boys will start at 6 p.m. in Berlin.

The teams will then participate in the Indian River Tip-off Classic Friday and Saturday.

Mike Kelley has worked with the girls’ team for three seasons as an assistant coach. This year, he has taken over as head coach of the varsity team.

In his 20 years coaching the sport, this is his first time as a head coach.

“I’m excited to get the opportunity to see what I can do,” he said.

Running nearly the same system as last year – with a few tweaks – Kelley said the group was able to jump right back in and get ready for the busy first two weeks of competition.

“They’re familiar with the system and it worked well – full-court press, man-to-man, and outrun the other team,” he said. “We have speed and athleticism, so why change anything?”

Kelley said all of the girls came into preseason in great shape because they played a fall sport.

There are 12 girls on the team. Six of them competed in the short six-game season last year. This year, the team will play 21 games, with playoffs.

“I think this team can be really good,” Kelley said. “We have height for the first time, we have multiple outside shooters, and we have a lot of threats. We have a deep bench. It’s a really strong team. It puts us in a good position to have a successful season.”

Kelley said the team is well balanced this year. The girls’ team has always been known for its defense.

“In the past, we relied on our defense, but the offense is much improved,” Kelley said. “We have at least six who can take outside jump shots and three who for sure can shoot three pointers.”

Seniors Lily Baeurle, Morgan White and Myranda Beebe have stepped up as leaders, the coach said.

“Lily is committed and dedicated to the sport. She has knowledge and experience and is cool as ice under pressure,” Kelley said. “You can rely on her to help in any situation.”

“I think we’re coming along pretty well. Everybody’s picking it up again quickly,” Baeurle said. “I’m definitely excited for the season. I feel like we’re going to do well. We want to make it as far as we can and build our team chemistry along the way … We have seven seniors. I think we’re definitely going to be leaning on our senior class.”

“She brings a certain leadership, she sets the tone for the rest of the team, and pushes the ball up the court well,” Kelley said. “Myranda is the toughest girl on the team. She’s lightning fast and never gets tired. She has a positive attitude that the team has absorbed.”

The Lady Mallards kick off the season on Tuesday in Delaware against Greenwood Mennonite at 4 p.m.

“We’ll see after a week off how quickly we re-jell in 24 hours [after practice on Monday before the game],” Kelley said.

He is expecting tough competition this year.

“It will be fun, close, exciting and entertaining games this year,” Kelley said. “Hopefully we’ll be on the plus side because of our athleticism and speed,” he added.

The group wants to make a run in the playoffs and is shooting for an Eastern Shore Independent Athletic Conference title.

“We have the pieces and parts to make a challenge for it,” he said. “We’re ready to get to our first game. I’m excited to see what we can do.”

Twenty-four players came out and Moylan kept 11 on his roster, seven of whom have varsity experience.

“The returners are pretty solid [and] some of the new guys will help out,” he said. “They’re very good athletes and very competitive. We’re not overly deep, but some of the newcomers were a pleasant surprise, especially on defense.”

After only playing three games last year, the squad will take the court for 20 games, which includes two in each of the two tournaments on the schedule.

“We’re considerably further along then we have been in years’ past,” Moylan said. “Were improving daily – every practice is better and better – they’re understanding the offense and defense and they’re working as a unit.”

This is Moylan’s fourth season with the program. He was an assistant the first two years.

Moylan said he is expecting strong competition in the Eastern Shore Independent Athletic Conference this season.

“It will be all about [senior] Brice [Richins], [junior] Griffin [Jones], [senior] Mike [Wehberg] and [junior] Jack [Gardner] as how far this team goes,” Moylan said. “They’re studs in every other sport they play at Worcester and they’ll have to be studs here too.”

Moylan said Richins and Jones, the team’s point guard, have stepped up as leaders.

“Both of them are fantastic with everything we do. They’re leaders of the pack, without a doubt,” Moylan said.

“We’re working hard in practice. I’m really excited. We should have a pretty good year,” Richins said. “We’ve got five seniors so it’s a lot of my close friends I’ve played with for a few years now. It will be a lot of fun. The chemistry with this team is a lot different than any other I’ve played on because it’s mostly juniors and seniors, so we’re all pretty close.”

Moylan said the team defense has always been solid because the boys play hard and they are good athletes. They continue to work on and build their offense, which is improving, Moylan said.

The goal this season is to win as many games as possible, get to the playoffs and compete for the championship.

“Delmarva Christian is loaded this year, but we’ll do the best we can and give them a run for their money,” he said.

Some clouds early will give way to generally clear conditions overnight. Low around 30F. Winds NW at 10 to 15 mph.

Partly cloudy skies in the morning will give way to cloudy skies during the afternoon. High 44F. Winds NNW at 5 to 10 mph.